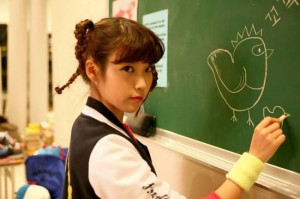 Generating news as a celebrity may be easy, but good publicity? You will need to consult IU, who has melted hearts with her acts of kindness.

The young singer actually gave out rice cakes to her classmates at school, and it wasn’t just because of her rise in earnings. IU’s sudden popularity had caused the school to become noisier, and the average mark for her class has fallen as well. IU said that she had given her classmates rice cakes because she felt sorry for them, and wanted to show her apology.

IU also made news recently when she presented staff members of SBS’ Heroes with 100 padded jackets from the sportswear label she models for. The cutie-pie also personally thanked the staff for bearing with the cold while filming the show, melting the hearts of those present at the set. The producers even said with gratitude, “Because of her busy schedule, IU must have been exhausted most of the time. However, she never fails to show up with a bright appearance. The way she showed her concern for the staff was beautiful and everyone loved her.”

IU is gaining positive attention everywhere these days, with people praising her for her talent, modesty and kind heart. No one knows what’s going to happen in the future, especially for teenage stars like IU, but if she stays on the right track, I’m guessing that she has the potential to establish a long-lasting singing career for herself.