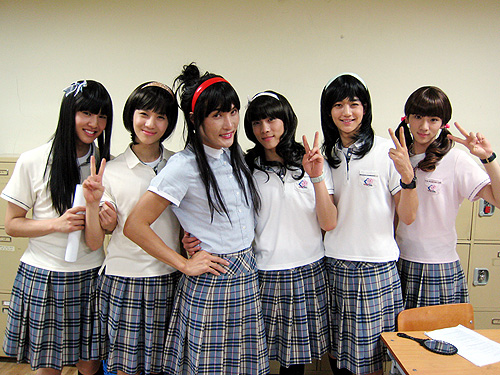 There is not a chance that those of you, who managed to watch performances from this year’s SBS Gayo Daejun, forgot this precious moment:

I wouldn’t say I’m a fan of Beast, T-ara, or the song “Yayaya” (even though I find it ridiculously addictive), but I found this performance not only so cute that I have probably contracted diabetes,but an interesting look into the possible gender inversions in kpop. With males tackling feminine vocals, choreography, and concept (or vice versa) it only changes the way one views the song, but for me  it broadens the appreciation of the song, as well as the group originally responsible for the song and the group recreating the song in an inverted gender. This isn’t anything new, last year’s SBS Gayo Daejun boasted MANY performances like 2PM performing T-ara’s “Bo Peep Bo Peep” to CL performing G-Dragon‘s “Heartbreaker,” but for some reason or another the thought struck me now. I let this idea soak in my brain and hit the internet, curious to hear how some of my favorite kpop songs sound when sung by the opposite gender.

I like what I found. YouTube, being the ever so generous resource that it is, boasts many videos where uploaders take songs and change the pitch, to make it sound as if the opposite gender were singing them. Though this doesn’t really work for male to female pitch change (it just ends up sounding chipmunky), some of the female to male songs provided some food for thought. Here are some of my personal favorites but you should all check it out:  The harmonizations never caught my attention before. Not to mention it doesn’t sound too different from Beast’s performance.

Can you imagine Big Bang rocking “Go Away” at the Big Show?

2AM covered this song at this year’s MBC’s Chuseok Special, but I much prefer this version sans the lolathon worthy change in JYP‘s voice.

So what are your thoughts of these gender bending musical mix ups?