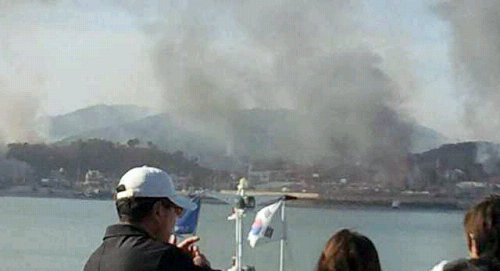 North Korea fired some 200 rounds of artillery at YeongPyeong-do which is an island in the Yellow Sea near the western sea border between North and South Korea.  Initial reports claim that the attack killed one and injured 13, 3 seriously, but the South Korean military is claiming there were no deaths.  South Korea called in their Air Force and counter fired about 80 rounds of artillery. The attack began as the South Korean military was conducting routine drills in waters off of the island

YeongPyeong-do is populated with about 1,300 residents.  Houses were on fire and many residents found shelter in schools or began fleeing towards mainland South Korea.  This current escalation in violence comes 8 months after the Cheonnan disaster which took the lives of 46 and is suspected of being the result of a torpedo attack from the North.  South Korean President Lee Myun-bak ordered his ministers to not let the incident escalate.  The threat of violence in Korea has affected worldwide markets causing European stock markets to plummet and Asian markets to also close down.

With this new development with the tensions between North and South Korea, stars took to Twitter to pray for the victims and peace.  Among the first tweets regrading the issue were those from Simon D of Supreme Team and Jay Park.

#prayforkorea has shot to the top of the trending topics as stars, their fans, and people around the world hope for a peaceful outcome.  Most of us have been fortunate enough to live in times of peace and not have had to experience the horrors and tragedies of war, I hope we’ll never have to.  In the words of John Lennon:

“…Imagine no possessions, I wonder if you can, No need for greed or hunger, a brotherhood of man, Imagine all the people, sharing all the world.  You may say I’m a dreamer, but I’m not the only one, I hope someday you’ll join us, and the world will live as one. ”

If you’re interested in seeing more information you can find some video coverage of the situation here and here.