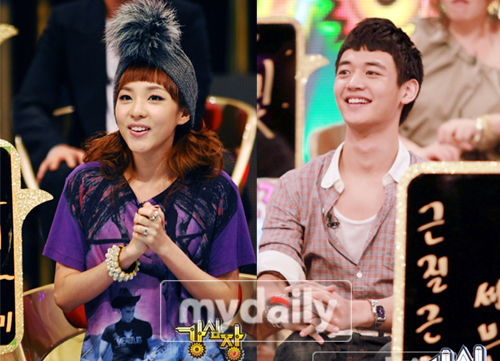 So yeah, what’s that word for a cougar that’s not quite one yet? Cub? A liger? Panther? Well whatever you choose to call her, 2NE1’s Dara is not afraid to admit she’s got the hots for the youngins.’

On a recent recording of “Strong Heart” Dara (26) [with a Pomeranian on her head] admits that she finds SHINee’s Minho (19) quite the comely young fellow indeed.

[Sandara Park ] truthfully said, “During the music award ceremonies at the end of last year, I got to sit between the younger guys of SHINee and 2PM and I was so happy that I didn’t know what to do.”

Upon hearing this, the MCs asked the insistent question, “Who among them made you so happy?” Sandara Park said “SHINee’s Minho-shi was sitting right next to me,” and let the everyday interest she had in Minho be known.

However, Sandara Park said “But things cannot work out well with Minho-shi,” and explained the reason why she cannot be linked with Minho despite her interest.

Aww, come on Dara. It’s nothing but a number. Age is definitely no obstacle for SHINee’s fans. Besides, you look younger than he does.

Dara, her hat and Minho will appear on today’s episode of “Strong Heart” on SBS.