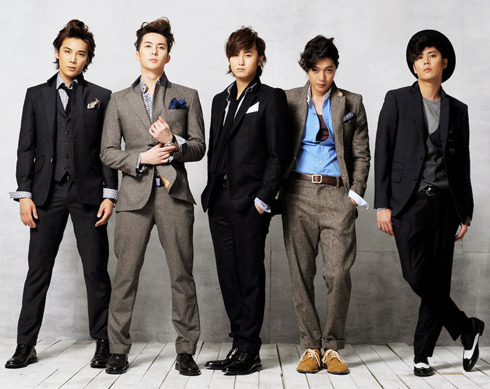 Seems like the popular ‘sunbae’ boy groups from the mid-2000s (that is, DBSK, Super Junior, SS501) aren’t having the best of luck this year in terms of, well, staying in one piece. With the expiration of their five-year contract, SS501 might be the next victim.  With the emerging news of individual members pursuing activities with separate entertainment companies, the popular boy group’s future is proving to be more and more uncertain.

But not if leader Kim Hyun-joong can help it.

During a press conference for his upcoming MBC drama “Playful Kiss,” Kim Hyun-joong stated, “People say we have disbanded but none of that talk has come from our mouths. What are you going to do if we then come out with a new album? Please just wait and see.”

Earlier this year, Kim Hyun-joong moved to KEYEAST, who also manages the likes of Bae Yong-joon and other top entertainers. Kim Hyun-joong clarified that he originally made the move seeking guidance for his rising acting career, but was delighted to find that KEYEAST would support him in his singing endeavors as well.

“It has not been set as of yet but it’s true that I’m preparing for my singing career as well. I don’t know if I’ll go solo or be part of a group but as of now, I’m preparing for an album with a solo career in mind,” he commented.

Kim Hyun-joong was the first of the SS501 members to sign on with a new company. Fellow member Park Jung-min followed suit just two weeks ago, signing on with CNR Media. The remaining three members have not made any official moves as of yet, but Kim Hyung-joon has shown interest in joining S Plus Entertainment.

Well, Pretty Boy can say all the hopeful words he wants, but let’s be honest: splitting up your members between different entertainment companies doesn’t exactly spell “group activities.” It also doesn’t help that Kim Hyun-joong himself reported that his next musical endeavors will most likely be a solo effort. Of course, it’s not to say that a SS501 reunion may not happen…in coming years. But for now, Triple S may have to wait.