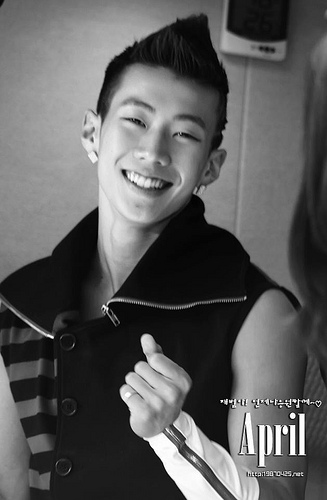 Ever since the Scandal That Shall Not Be Named, fledgling solo singer has (rightly) kept mum about the incident. During a recent photo shoot with Sports Chosun Jay finally opened up a bit about his feelings concerning the Situation:

Park Jaebum explained, “I was a bit bitter. But it’s not like I was going to die if I couldn’t become a singer, and I just quickly wanted to find something else to do. I’m talking about either being a dancer or finding a part time job”, “It’s because my life doesn’t end there. I always thought there was going to be another opportunity somewhere else.”

Park Jaebum confidently and open-heartedly explained his side of the story. “If I bring up the past only bad things will happen, and I don’t want everyone to suffer with that. I’m just living my life with the flow.”

Park Jaebum also revealed his changed habits. He reads all of the negative comments. “I never used to but I regularly monitor them now. But I don’t lose my confidence when I read them. Because it’s not like they know me personally.” That is how he is getting stronger and how his confidence was created.

When asked whether he has any disappointment towards JYP, he showed a mature image. He said, “It didn’t happen because we wanted to feel like that towards each other, and also there is no time for that. Life is too short for that. Since it’s all in the past, it would be good if both of us succeeds.”

Although Park Jaebum said everything without fear, but when asked ‘What is the fault that JYP said you had”, he hesitated for a second before answering “I want to answer but I won’t.”

After letting out his mind after hiding it for so long, Park Jaebum ended with “Because of the fans who waited for me, I was able to handle the tough times. I promised to never disappoint them.”

It’s nice to finally get a bit of insight from Jays point of view, but hopefully, at some point before 2011 Hottests and Jay fans will finally knock down their Berlin Wall, figuratively speaking.