Stray Kids' "I Am Who" Shows Potent Lyrics and Pitiful Production 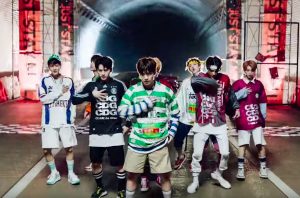 JYP’s newest boy band, Stray Kids, made waves with their debut I Am Not, notching two mentions on our mid-year debut list. Their brand of rock-rap, spearheaded by the sub-collective 3racha, made a huge splash on the tropical house-soaked K-pop scene, and their follow-up, I Am Who, became one of 2018’s more anticipated sophomore releases. Sadly, while the lyricism does retain the angry youth energy that made their debut EP so potent, the music and production represents a significant sophomore slump.

I Am Who is, at its core, an EP designed to capture the zeitgeist of younger millennials and generation Z. It’s catharsis for Korean youth and young adults who are choking on the expectations of their parents and society at large, trying to forge their own path while being forced back onto the main one at every turn. The bitterness, resentment and frustration are palpable, reverberating through the lyrics with every note. Woojin in particular showcases so much anguish as he desperately fights to keep the world at bay.

The lyrics are no slouches either; they give Stray Kids plenty to work with. The dominant themes of I Am Who are self-doubt and the self-loathing that can induce. Title track “My Pace” has Stray Kids desperately trying to keep moving at their own speeds, without being bogged down by the inevitable jealousy of seeing others outpace them. They’re fervently trying to keep their blinders on, because they know when you compare yourself to someone and come up short, the reaction is often not to work harder, but give up. “My Pace” embraces that to make it to the finish line, it’s best to ignore the others on the field.

That line of self-inflicted stress carries on throughout the next four tracks. “Voices” is a different take on the issue of societal pressure. Here, the voices that are tormenting Stray Kids are not the viewpoints of parents or teachers, but their own internalizations of social expectations and the ensuing doubts that they can make it as musicians. It’s that nagging fear all artists experience, that they’re not going to succeed, so give up and study accounting already; as Stray Kids show, they’re the hardest voices to ignore.

“Question” and “Insomnia” expand the doubts hinted at with “My Pace” and furthered by “Voices”. “Question” takes on the fear of failure. It’s one thing to want to make your own choices, but actually doing so is terrifying. Stray Kids agonize over every decision they make, wondering if they’re actually doing what they want or if they’re just rebelling. They end up so spun around that the final question asked is “What’s my question?”. “Insomnia” takes the doubts and anxiety to their logical conclusion. The build-up of anxiety and self-judgement and doubt and internal pressure has been keeping Stray Kids up at night, furthered by their inability to find a solution to their problems.

The final two tracks, “M.I.A.” and “Awkward Silence” don’t quite fit the rest of the mini on a thematic level. While the self-flagellation does play a role, they’re more about relationships that are slowly dying. The girl in question has emotionally checked out of the relationship, which Stray Kids haven’t fully cottoned on to and fail to understand their role in. They blame her for changing and being difficult to cheer up without realizing how much that describes them as well. 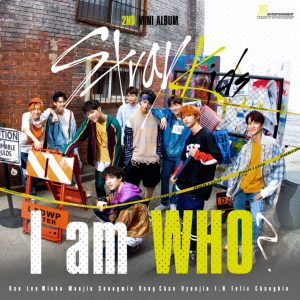 Sadly, while the lyrics are potent and enveloping, the instrumentation are a huge let-down. It’s not bad, but it tops out at adequate. There’s no long-term impact of I Am Who. The whole EP just runs together in a slurry, no track really standing out, or even coming across as distinct; except for “M.I.A”s T-Pain levels of autotune. There are no distinct grooves, no melody lines, and the hip-hop high hats and drum machines bury what rock elements there are so far in the mix that the “rock” side is a vibe more than a musical presence. The resulting effect is that I Am Who feels like noise more than anything else, the musicality of the guitars and bass drowned out by rap synths and vice versa.

While I Am Who proves that Stray Kids has a powerful ability to speak to and for the youth, it is hampered by the subpar production. There are brief, powerful moments where the lyrics, the vocals, and the instrumentals all come together, but they are few and far between.