Winner's "Everyd4y" is Polished, Yet Pedestrian 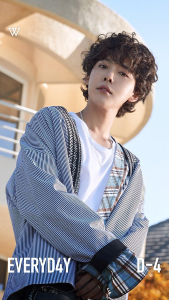 Since Nam Tae-hyun made his exit from the idol life, YG Entertainment had wasted no time in rebranding Winner as a four-membered group, naming their following releases Fate Number For and Our Twenty For in light of their “new and improved” member count. Despite the loss of one of their main vocalists, Winner’s monumental success with singles like “Really Really” in 2017 proved that they could carry on just like before, and excitement steadily mounted for their forthcoming second full-length album, Everyd4y.

2014 S/S remains one of my favorite albums in K-pop. The songs were composed in a variety of styles, and yet ultimately retained the chic concept that Winner wanted to convey for their debut. Each of the five members had a chance to shine, and the large degree of involvement in songwriting and composition was another big plus for me. Exit: E on the other hand had Winner take a heavier focus on instrumentation for another strong entry into their discography.

Taking all of that into account, it would be remiss to simply ignore former member Taehyun’s undeniable influence in Winner’s creative direction on both albums, and with only two single albums released since his departure, the jury hung on whether Winner’s musical direction had taken a turn for the better or worse. Hence it was with slight trepidation that I counted down the days to Everyd4y‘s release. Compared to Winner’s previous works, how would it fare?

Well, to put it bluntly, not very well. It still has a certain quality expected from a boy group of their scale and caliber, but it’s flawed and unfortunately does not reach the bar 2014 S/S had set.

Let’s begin with the title track, “Everyday”. Described as “sophisticated trap”, “Everyday” has Winner serenade their love interest, declaring how they wish to spend every moment of time they have with her. Initial reactions to the snippet that was released were mixed at best, with most of the ire directed towards Winner’s heavy usage of autotune in the chorus.

Now it shouldn’t be surprising that there are some people who have disparaging opinions of autotune, dismissing it as a crutch for bad singers to rely on and something that just ruins a good song. But this black-and-white opinion isn’t fair, and “Everyday” illustrates both sides of the argument quite well. Mino and Hoony’s verses are littered with autotuned adlibs not unlike those popularized by Quavo and Travis Scott, and they make their verses that much more fun and memorable. On the other hand, Yoon‘s vocals are so macerated with it that they reach an almost unrecognizable quality in the chorus, and it really takes the listener away from what he’s trying to convey. 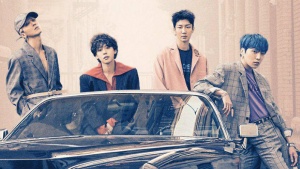 The latter part of the chorus draws similarly mixed feelings. It’s a simple repetition of “everyday”, and it’s certainly effective in getting stuck in the listener’s head. But its frankly unimaginative composition, combined with the autotune, makes it feel slightly obnoxious the more one listens to it. As if that wasn’t enough, the climax definitely felt inconclusive and sloppy, perhaps one chorus too short, and Yoon’s adlibs are poorly mixed in the cocktail of autotuned vocals. Although not a bad song per se, this is probably the worst title track Winner has released, and once the refrain gets out of my head, I don’t see myself returning to this song much in the future.

Similarly, the climax of “Air” is poorly mixed, and one can barely hear the high notes Yoon is reaching in the background of a frankly unsatisfying and equally unimaginative chorus of “you are my air”. It’s not that this song is poorly written, but the uninspired melody of the track just makes “Air” come off as a lazy effort. If this song has a saving grace, it’s Winner singing together at the very end, desperately breathing some life into this bland, dated song that this album could have done without.

After that snooze-fest of a song, “Hello” couldn’t have come at a better time. Produced by both Mino and up-and-coming trainee Millennium — who recently produced iKon‘s “Love Scenario” — “Hello” depicts various vignettes of a clingy, ever-worrying boyfriend. Over a simple, quirky instrumental, Winner delivers a much-needed pick-me-up. The adlibs mimicking the various sounds a telephone makes, interspersed with actual dial tones in the bridge, make for a playful listen, and Hoony delivers a standout verse denying his obsession over his love interest.

I need you babe, it’s past midnight
But instead of a glass slipper will you leave a text instead?
This isn’t obsession, it’s definitely just worry
If you say you fall asleep, it’s okay, my trust is still there

Despite being touted a 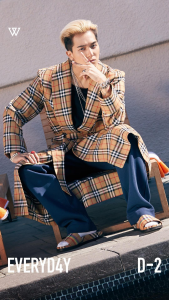 s a follow-up to his previous solo, “Body”, “Turn off the Light” lacks the immediate payoff and booming vocals that made “Body” so instantly memorable, but makes up for it with a lyrical masterclass from Mino. Whilst “Body” depicted Mino in a dazed state after a torrid affair of lovemaking, “Turn off the Light” takes a different approach, with him resisting the urge to make love to an innocent girl beside him, willing himself to just “hold hands and sleep”. Over the simple strum of a guitar, the lyrics are predictably sensual, with a playful sense of push-and-pull throughout as Mino describes calming his libido by memorizing the national anthem in his head. It’s in the bridge however that Mino’s subtlety begins to slip, and begins drowsily describing his privates’ state of arousal.

Ever since it was performed as an unreleased track in their concert in Seoul as 5, I’ve had hopes for a studio release of “La La”, hopes that were dashed once it became clear that Exit: X was not going to happen. So you can imagine my excitement when I saw it included in the tracklist for Everyd4y. Reminiscent of Exit: E‘s “Immature”, “La La” has Winner determinedly singing their troubles and stress away, onlookers be damned. It’s definitely a fun song, but listening to it, all I can think of are ways that this song could easily be improved on.

The burst of energy the track provides from the opening screams of “1, 2, 3, 4” is excellent, but is let down by the slightly awkward transitions to Yoon’s chorus. The numbering-off directly before the final chorus feels unnecessary and only serves to stall the song’s hard-earned momentum. All in all, it’s another solid track, though it has problems that could have been easily remedied.

Acoustic tracks “For” and “We Were” feel like standard-fare, cookie-cutter ballads, looking back with wistfulness and regret on past relationships. They aren’t worth much mention for the most part, but Winner delivers standout vocal performances in each one. The climaxes are finally properly mixed, enough for Yoon and Jinu‘s falsettos to shine on each track. Hoony in particular surprises, stepping up and filling in as a competent secondary vocalist when the need arises. Altogether, though, one gets the distinct feeling that these tracks are hardly uncharted territory for Winner; they’ve done better before with songs of a similar composition. 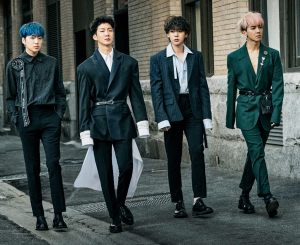 “Special Night” begins with a vocoder that seems influenced by several tracks off Taylor Swift’s Reputation, and quickly gives way to a funky, upbeat instrumental that would get anyone on the dance floor. On a date with their love interest, the members of Winner are determined to make it a special night between them. Mino delivers his verse with charismatic gusto and deftness, as he describes getting himself ready for the date:

I’m making an especially big deal out of this today
With mousse in my hair, no no
That looks a little old, so I’ll wax it naturally instead.
The expensive clothes I’ve kept hidden away fit me well
I hear the water’s good
My wallet is fat, cash, check, I’m off to see you, leggo!

Once again, however, the chorus is a letdown, with a one-note melody that doesn’t really change. It ultimately comes off as lazily written, which is a shame considering how well produced the instrumental is.

Winner takes another stab at “sophisticated trap” with “Luxury”. Beginning with a simple, Sara Bareilles-esque piano riff, “Luxury” depicts Winner becoming extravagantly indulgent in their quest to win the affections of another. Though this concept feels all too familiar, Winner’s take on it is refreshing, playfully acknowledging that love can’t be bought with money alone, and thus even if they’re billionaires, “you’re a luxury”. Like “Everyday”, the track makes liberal use of autotune, but unlike the mixed results “Everyday” had garnered, “Luxury” knocks it right out of the park. Paired with autotune, the intermittent adlibs and vocal runs are wonderful, and the harmonies in the bridge are worth rhapsodizing over. Mino even manages to surprise with a smooth falsetto as he wonders how much his love interest’s affections are worth, noting that – in a playful reference to their seniors, Big Bang – “not even a VIP can buy it”.

Rounding off Everyd4y are the bonus tracks “Raining” and “Have a Good Day”, both previously released on the Japanese repackage of Our Twenty For, and it’s clear Winner has saved the best for last: both songs are perfectly capable of being great title tracks. Penned by Hoony, “Raining” is probably the most complete track of the album, with numerous instrumental details that are added and subtracted when needed, from the strings in the effortlessly catchy chorus to the distinct wail of an electric guitar after the final chorus.

Lyrically, “Raining” has a familiar concept of likening one’s sadness and heartbreak of failed relationships to rain, but one can’t help but admire the spin Winner puts on it, with particular praise given to the rhyming of “raining” and “day by day” in the memorable chorus.

Raining, Raining, Raining, it’s pouring
In my eyes, in my memories, as if tears are flowing
Day by day by day, every day is wet with you
Without an umbrella, I wash you away, as if time flows over me.

Penned by Mino, “Have a Good Day” gets dark pretty damn fast once you realize that it was written in memory of Ladies Code’s Eun-B, his former classmate who died in a car crash in 2014. Instrumentally there’s nothing particularly of note, but the lyrics are poignant and predictably touching, and the harmonies throughout this song are nothing short of spectacular. Fittingly, for such a personal song, Mino sings half of the chorus with a tenderness that we rarely get to hear from him.

Whilst Everyd4y‘s tracks are mostly unobjectionable, and it has its share of standout moments, it’s constantly plagued by recurring flaws across different tracks, such as poor mixing, bland instrumentals and melodies, and poor use of autotune. I wished Winner had approached every track with the same meticulous care that must have went into tracks like “Raining” and “Have a Good Day”, because those tracks show the immense potential that Winner still have, but which has been unfortunately buried by tracks that are average and sometimes half-assed. Given YG’s track record of long periods between comebacks, I hope Winner takes the time off to regain their footing from a shaky misstep, because if I’m still listening to the album in a month, it’s only because I’m hung up on what could have been another stellar album.