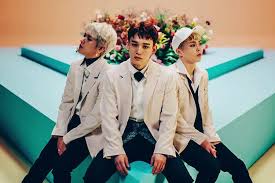 After a wait of approximately one and a half years, Exo-CBX finally treated fans to a Korean comeback with their second mini album Blooming Days. CBX has a packed schedule for the next two months, with a Japanese album as well as concert tour lined up. SM Entertainment has been unpredictable with its management and so fans were worried about a hastily produced album. But their fears have been quelled and the title track is a testament to that. “Blooming Day” has effectively layered CBX’s sound onto that of Exo’s tried and tested tunes.

SM has churned out well shot MVs throughout the first quarter of 2018 and “Blooming Day” is no exception. There is much recurrent imagery that will not be a surprise to anyone who has kept up with CBX’s releases. Three common themes that come through are those of suits, shoes and backup dancers. The look that Chen, Baekhyun and Xiumin are sporting this time is suave and charming, not unlike Hey Mama. The Dior, Valentino and Louis Vuitton pieces that they don are fun, sexy and not overbearing. Chunky and clumsy looking shoes are turned into the perfect dancing implements by the trio and it is astonishing to see them glide wearing them! Two out of three official CBX videos in the past have had a shot of them tapping to the beat. It is interesting to see CBX make references to their roots and older works.

The Exo fandom has also acutely observed that the number of backup dancers is always six in order to maintain a count of nine, which is the number of members in Exo. I also don’t think it would be a stretch to associate CBX’s hair colors with their powers. In “The One”, they were given cringey titles (as a joke) that resonated with their powers. Baekhyun’s platinum hair is reminiscent of his light wielding powers while Xiumin’s cobalt blue is a reference to his power of ice. The makeup accentuates the features of the members (such as the purple eyeshadow for Xiumin), and definitely flatters them. 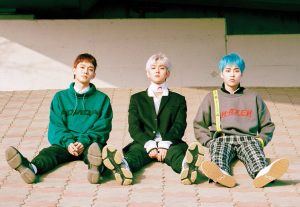 The song itself lives up to its name and gradually blooms as it nears the chorus. The refrain of ‘Oh baby’ is addictive and appropriately synced with the dance sequences in the MV. The song is funky and cool and a tad bit slower than “Hey Mama”. The little head shakes that the trio do for the chorus, on a floor covered with kitchen tiles, are mesmerizing. The closeups of the members, the abundance of ear piercings and the smooth dance moves will definitely have fans on edge. Throughout the MV, CBX maintain stoic eye contact with the camera which then dissolve into smoldering looks, causing a tug at one’s sanity. The lyrics also have every Exo-L wanting to scream out a loud resounding YES:

Flowers are the stars of the video. The blooming in “Blooming Day” has been taken quite literally to deliver a floral extravaganza. From the teaser images to the video itself, flowers color several facets of the comeback. One particularly impressive moment in the MV was a wave of flowers that ebbs and flows within a tiny pool. But flowers in excess can be smothering. To rid the viewer of such a feeling, black and white costumes have been juxtaposed with the rainbow spectrum of the flowers. The swirling colors in the beakers as well as the diffusion of light in the vases are hypnotic and stunning. Glass and it’s property of refraction has been harnessed to illuminate Chen and Baekhyun as they look straight into the camera.

The MV is not without its bizarre and impossible to understand elements. Segments such as those showing flowers stuffed down socks and one with flowers being churned in an electric mixer make one stop and think. Without a discernible storyline, it gets difficult to maintain the interest of the viewer but the MV of “Blooming Day” has capitalized on the theme that underpins the song. The color palette is heavy on pastels and artfully filtered shades of orange. In one spectacular shot, Chen, dressed completely in red, is sprawled in a room colored with orange and surrounded by flowers.

“Hey Mama” was an extremely successful debut and “Blooming Day” has been an even better follow-up. The track is clean, melodious and understated. With the amount of hard work that has gone into juggling two comebacks as well as Exo schedules, CBX definitely deserves a pat on the back for living up to high expectations and executing an excellent title track.