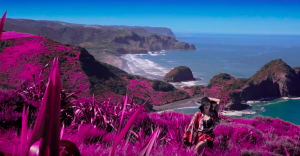 Mamamoo is switching gears with their new title track, “Starry Night”. Their last release, “Paint Me”,  is a piano-based ballad that lets the members’ voices come to the forefront. “Starry Night” goes in the complete other direction of that: instead of Mamamoo’s usual sweeping vocals and a retro-pop feel, it goes with a trendier, more mainstream sound. But while the song falls flat, the MV’s visual beauty makes up for it, albeit partially.

“Starry Night” has a vibe belonging to a music festival, but it doesn’t deliver on the hype necessary for such a song type. There’s a hypnotic and beguiling quality to instrumentals, which has a folk-electronica influence. In contrast, the vocals are understated and unsatisfying, which is a disappointment because Mamamoo is known for their strong vocal abilities. The chorus doesn’t have a satisfying climax: the climbing beats in the hook and the lack of resolution are frustrating. The short coda at the end of the video feels like an afterthought, and it takes a more traditional mournful ballad route. While listening to it a few times could make the song grow on the listener, it isn’t an immediately catchy song in the way that other Mamamoo songs are.

However, this feeling of dissatisfaction resonates with the emotions of the lyrics. The lyrics are about the breakdown of a relationship — watching it fall apart, and yet not being able to do anything because the other person in the equation is not invested in fixing the problems. The song implies that it is spring, the season of love, and yet the passion between lovers is fading away into nothing. The drawn out melody and subdued vocals play into the lingering agony that comes with the breakdown of a relationship: you know that it’s ending, and yet you don’t have the strength of will to completely break it off. In this regard, the music and the words definitely work together, and the effect is poignant. 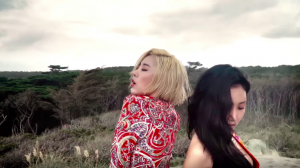 The MV focuses heavily on beautiful visuals and the natural scenery. The colors are rich and saturated, and pan-out shots often underscore their beauty. The majority of the scenes takes place deep within nature. The members are shot within many different types of environments, from the tropical sea, to arid mountains. The members either occupy the majority of the frame, or are small against the brilliant scenery.

The toggling shots of the member’s faces up close and then their silhouettes from far away in nature perhaps echoes the dissonance of a person in a failing relationship: one person is present and is asking to be seen, and yet is insignificant to the other. Collectively, however, the scenes feel disconnected: each of the members are shot within different environments individually. The few shots the audience gets of Mamamoo together are group choreography shots. The lack of cohesion draws attention away from Mamamoo as a group, and the focus becomes the environments they inhabit in the frame. On top of that, as a primarily dance and scenic MV, it has no narrative, nor any sort of immediate connection to the song.

“Starry Night” doesn’t bring much to the table for Mamamoo’s development or strengths. They have done playful MVs that showcase their ability to entertain, and moodier, dramatic ones that also focus on their vocal performance. Mamamoo is a group with a lot of personality, creativity and intensity, with a great sense of humor and a latent sensuality to boot. But none of things really translate here. Neither the song nor the MV provide something new to Mamamoo’s repertoire. They could be working together as a narrative that allows each to gain deeper meaning, but at the end of the day, the MV is just a collection of aesthetically pleasing shots. It feels as though Mamamoo has sacrificed their best qualities for something mainstream, in an effort to expand past previous efforts.