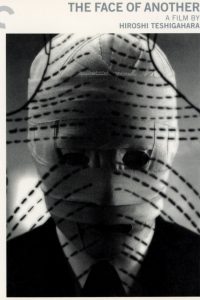 Kobo Abē’s novel – later adapted into a movie – The Face of Another explores the change a man goes through as he dons an extremely lifelike mask following an accident that mars his face. The doctor is clearly nervous, and yet the feeling’s tinged with the excitement of discovery and playing God. He warns Okuyama donning the mask would change how he acts and how he behaves. But Okuyama, anxious to hide his ruin of a face, dismisses his warnings carelessly; as he puts on the mask for the first time, he thinks “I am who I am, and that can’t change.”

He’s wrong. Okuyama begins to become disassociated from his identity, discovering that his appearance is more intimately linked than he had suspected with his behavior, attitudes and identity. He not only looks like an entirely new man, but increasingly becomes one once he sheds his bandages and takes on a new face. In this new identity, he seduces his wife but is hurt when she goes along with the advances of this stranger — even though she later insists she knew it was him. By the end of the novel, removing the mask after all that he went through, Okuyama chillingly refers to himself as “no one”. We all become what we pretend to be.

Such is the story that arguably provides the most inspiration for G-Dragon‘s latest eponymous EP, Kwon Ji Yong. Being a G-Dragon release, suffice to say, expectations were high, made even higher when he decided to name it after his birth name. As the title suggests, the theme of personal identity is his focus, front and foremost. It’s not the first time the theme’s explored within his discography, but Kwon Ji Yong on all counts might be the most cohesive effort G-Dragon put in to define himself, and who he really is — is he the glamorous, cocky, energetic onstage persona known as G-Dragon, or the more humble, understated Kwon Ji-yong? And after 11 years of donning the mask that is G-Dragon, is there anything of Kwon Ji-yong left? 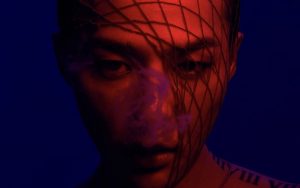 “Middle Fingers Up” serves as the album’s introduction, and halfway through the song it becomes abundantly clear G-Dragon has decided to abandon any notion of good taste and subtlety at the front door. Over a repetitive piano beat reminiscent of Kyle‘s “ISPY”, it flows like a sing-along – perhaps intentional given “ISPY’s” music video – as G-Dragon rants about everything that’s on his mind, from corruption and impeachment in South Korean politics, to attention-seekers using the friends-with-everyone Seungri as a means to get close to him, to complete strangers asking for his number so they can introduce him to hot girls, to the fact that due to all of the attention heaped upon him, “all the personal relations I [G-Dragon] have are now getting smaller”. His response to all these people is obvious given the song’s title but in typical G-Dragon fashion, he does it with style.

Peace Minus One, Everyone, Middle fingers up!

And pinkies then lift your middle finger up.

Put them up, twirl them around, play with them NOW.

Just eat this, fucking eat it eat it!

Over the chorus, he sarcastically teaches listeners how exactly to give people the finger — that of a peace sign (V) minus one [index finger]. It’s a clever use of symbols and wordplay, made even better knowing G-Dragon had previously adopted the ‘peaceminusone’ moniker as his personal instagram account, his own fashion label and as his personal symbol since Coup D’etat. And yet through it all, G-Dragon admits he feels lost about who he is.

Sometimes, I don’t know what’s real or fake, or who I am. 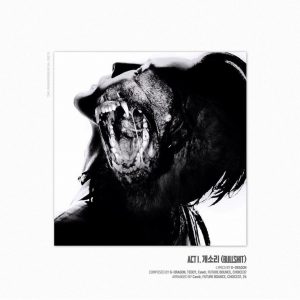 As far as introductions go, “Middle Fingers Up” is excellent, exciting, and highly enjoyable, alerting listeners he’s going to say exactly what’s on his mind, filters and idol restrictions be damned. After all, he’s already at the top of his game as G-Dragon, why should needless rules apply? As he triumphantly notes, his epitaph will be screaming that “I Veni Vidi Vici”.

The aptly titled “Bullshit” follows suit. From early teasers,”Bullshit” was originally the first title track, and it’s easy to see why. Stylistically, this track is unabashedly G-Dragon in his full glory. It’s bombastic, brash and grating — the beats are all over the place in the vein of “Crayon” (he even references the song directly). It’s in your face, yet charismatic enough such that you can’t seem to look away.

What is this bullshit?! 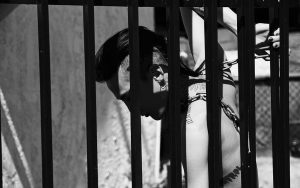 The puns between ‘Bullshit’ and ‘Dog’ are hammered home with the canine onomatopoeia littered throughout, as well as an obscure reference to US painter Christopher Wool’s “Run Dog Run” (which was teased on G-Dragon’s instagram with no explanation given). Lyrically, though, it’s a toast for all the fellow dogs in the industry, with G-Dragon simply urging them to keep ‘barking’, keep on doggedly doing whatever it takes for success and opulence, no matter how long it takes.

Where my dogs at? Que pasa?

In the dog’s house is mi casa.

My crew is full of fucking beggars, bullshit

Shake your tail and bribe your way 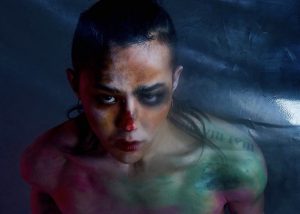 If “Bullshit” is the song stylistically representing the glamorous mask that is the persona of G-Dragon, then, chronologically speaking, “Super Star” is a reflection of what said mask has given him: a big house, a fancy car, money, honour, girls, George Condo paintings in his condos and an ever-increasing collection of vintages dated 1988. The spaced out production is similar to Kendrick Lamar’s “God” from his latest album DAMN, but while Kendrick was gloriously rapping about how his meteoric success must be what God feels like, G-Dragon — ever the pessimist — can only notice what his success can’t alleviate: –his loneliness.

My wish when I was young;

Even though I’m now living like those people I used to see on TV,

I’m sad for some reason;

A part of my heart is empty.

The chorus is blunt and to the point. It’s a simple repetition that “he needs somebody, any goddamn body”. He needs someone to admire his paintings with, someone to drink with, somebody to talk to, but the intermittent hellos scattered throughout the track only serves to emphasize the fact that nobody is there, nobody is listening. The loneliness culminates in the bridge, where he admits to talking to himself and breaks down crying with a child, insisting that he isn’t alone. For all the money and success that the mask brought, it alienates him. He desperately needs somebody. And after 7 years, we finally know why the mask sheds a single tear on the album art of Heartbreaker.

So what does he do? For one brief moment on this album, he takes it off. And like Okuyama at the end of The Face of Another, for one brief moment he is no one but Kwon Ji-yong. For one glorious track, he is untitled. Stripped back to piano and voice, “Untitled, 2014” puts his voice – his raw, fragile voice – firmly in the spotlight, as he reaches out to an old flame whom he admits he has hurt repeatedly in the past, pleading for the chance to see her again. He unabashedly admits he’d give everything he’s earned, everything he has gotten as G-Dragon, if only he had the chance to love her again.

If I can just see you

I’m ok with losing everything I have

I’ll meet you, even if it’s in a dream

And we can love again

Just as we are

But even with such a heartfelt confession, he is doubtful his lover could feel his sincerity, his truthfulness, that she would believe it actually Kwon Ji-yong, and not G-Dragon, who is singing.

I sing this song, but I don’t know

If my truthfulness will get through to you 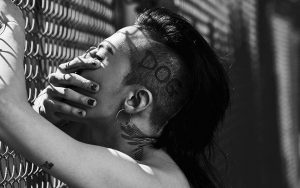 The verses are conversational, the chorus is dynamic, and the strains in his voice at the end of each chorus only serves to emphasize his pain and longing; throughout the track I was dreading the moment his delicate voice cracks. It never comes. The simplicity works, and the hurt and sincerity that is delivered helps make this track – in my opinion – the standout of this album, and the defining moment of Kwon Ji Yong.

Rounding the album up is “Divina Commedia”, and what an outro it is. Audaciously naming it after Dante Alighieri’s Divine Comedy – an epic poem describing one man’s journey into hell, purgatory, and heaven across three separate acts – G-Dragon takes the time to look back at his entire career. He knows that he made it; he’s successful, yet he knows what it took to get him at this point of his career.

When everyone else was growing, I was listing stocks

In an economical context, listing stocks refers to a company selling its shares to the public. In this song’s context, he refers to the fact that while everyone had the luxury of growing up, he started young as a trainee – whether in SM Entertainment or YG Entertainment – and ‘selling’ himself out, reinventing his identity under the mask of G-Dragon to adoring fans. As he elaborates later throughout the track, after 11 years this numbs him.

It doesn’t matter what kind of face; pretending and faking is a mask.

Putting your life on the line to fall into hypnosis.

You deal and trade your life just to eat and live well.

All of this culminates in a reference to the “The Truman Show“, a 1998 movie depicting a man named Truman Burbank, adopted and raised by a corporation inside a simulated television show revolving around his life, until he discovers its existence and decides to escape. Quite literally, the world revolves around Truman. And being arguably the most famous K-pop idol in the world, under intense media scrutiny and constantly reminded of his lack of privacy, G-Dragon must feel the same. In his own words, “he’s a normal citizen who sings, becoming a national actor.”

We all live in our own separate worlds (on the stage) 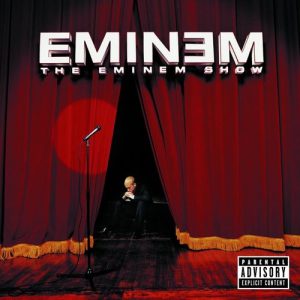 It should be noted he’s not the first rapper inspired by this movie. US rapper Eminem was arguably at the peak of his career in the early 2000s as the king of controversy, the gateway to rap for many. He was everywhere discussed, dissected, debated, and was even the subject of a congressional hearing. Under such scrutiny, Eminem later revealed he felt like Truman and subsequently released his 2002 hit album “The Eminem Show”, citing the movie as a key inspiration. Clearly, in some way, G-Dragon feels the same.

This album, despite its short length, is lyrically denser than anything I’ve heard so far this year. It tells his story, it’s filled with references to his previous works, rife with references to his personal life, his art he displays on his instagram, and it’s the first time I can say I’m positively blown away after a close listen. His personal struggle with himself, with who he is, G-Dragon or Kwon Ji-yong, and how his idol persona has changed him, clearly comes through on these tracks.

A few days ago, G-Dragon held the first stop of his final world tour in Seoul. At the very end of it, he sums up his feelings nicely:

“This has been my dream ever since I was a boy. I didn’t stop for one second. I feel good as if I’m living in a dream, but sometimes, I can’t tell whether this is a dream or reality. I’m trying really hard to find the passion I had when I first started. I hope you will stay by me no matter who I am—the humble Kwon Ji-yong or the glamorous G-Dragon.”