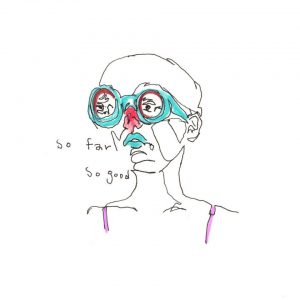 While artists like Dean and Crush are at the frontline of the R&B music scene in South Korea, Rheehab is but one of the growing pool of artists dedicated to the genre. Producing music that blurs the lines between hip hop and R&B, Rheehab’s tracks are laidback and soothing. Rheehab has gained a fair number of followers of his music online, though he remains distant from the public spotlight.

Rheehab’s recent tracks which he released on Soundcloud only a few days ago are characteristically groovy, allowing the listener to sink into a tender relaxation of the tunes. “ohohoh” is a track that uses a familiar echoing beat mix, calling to mind harder hitting hip hop tracks. However, Rheehab manages to soften the melody such that he conveys a sensuality, differentiating his music from those of his predecessors. Listeners are sucked into a whirling soundscape of slow-paced and alluring grooves.

On the other hand, Rheehab does not trap himself to delivering a single type of music. Contrasting with sensual tracks like “ohohoh” are upbeat songs, though not deviating from his tenderer style. Rather than flitting between extremes, Rheehab manages to deliver diversity without sacrificing character. “Lips Are Like Marijuana” and “Fish” come after and before “ohohoh”, respectively, and they demonstrate the multi-faceted nature of Rheehab’s music. “Fish” is more playful in its tone, whereas “Lips Are Like Marijuana” is comes off as a more domineering and confrontational track. Contrasting against the more whimsical tunes, Rheehab’s recent tracks delivers a range of emotions for his listener.

Looking back at the tracks that Rheehab first released on his Soundcloud eight months ago, it seems that the artist himself had embarked with the colours of music fairly well painted. Though many of his tracks were less polished than his more recent ones, they promised the same tanginess mixed with a tenderness and sensuality.

Rheehab started off well with the track “Everywhere,” which was flavoured like his more recent tracks – a unique blend of gentleness with muted beats in the background. However, subsequent tracks like “I’ll Be The One” and “keep you’r eyes open” though appealing, lack the quirkiness and novelty that attracted attention to Rheehab’s musicality. Rather, the beats felt too familiar and the lyric delivery was conventional as well. With nothing too special to these tracks, the aestheticism of Rheehab’s older tracks fall short of what he delivers now.

Perhaps trying to fine tune his own music style then, it is surprising how the tracks he released just a few months later are so much more polished than before. No longer sounding like echoes of others, Rheehab’s mixing of unique instrumentals shines through in “똑같지” (“Exactly The Same”). The brass instrument (likely a trumpet) that leads the melody drives the tune with a refreshing jazz vibe. Extremely charming in its perkiness, the track stands testament to Rheehab’s potential at novelty in his music.

On the other hand, tracks like “Woo Eh Oh” and “So Sweet” rings of the serenity and tenderness. “Woo Eh Oh” is more familiar to listen to with its soothing melody and calming atmosphere. Without large fluctuations in its melody, the track is comforting, suitable for a rainy night of pensive contemplation.

“So Sweet”, however, has a trendier tone to its melody. Resisting the categories of softer hip hop or flat out R&B, it is a bizarre mix of genres and style. The muted beats that underlie the entire melody adds a layer of dreaminess to the tune. Coupled with the groovier chorus, the track is a charming in its catchiness while retaining a wistfulness to it.

The progression of Rheehab’s music in the short span of a few months are testament to the potential he has as an artist to produce groundbreaking tunes. Taking into consideration the growing attention placed on the R&B and hip hop scene in South Korea, more and more artists are entering the genre. It is definitely a struggle to find a truly unique voice among the multitude of music styles that are already present and also among those that are emerging.

Much less visible in the public eye than numerous others, his music lacks media coverage despite its allure. Rheehab is worth mentioning precisely because he manages to distinguish himself from the rest. He does so in a nuanced manner, infusing his music with a personal touch. Instead of a blaring individuality that is boisterous and overwhelming, Rheehab proves his musicality in the subtleties of his music production.

Suitable for a cozy rainy night, or a contemplative solitude, Rheehab’s tunes prove to be a good companion for such situations. Perhaps his name itself is reflective of the kind of music he produces. Acting as a source of comfort through its pensiveness, it helps its listeners escape into a the world of soothing melodies and tender feelings.