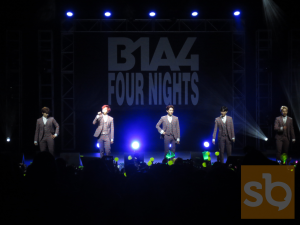 B1A4 embarked on their Four Nights in the US Tour from February 15 to 20 with stops in New York, Chicago, San Francisco, and Los Angeles. Being a group that’s been constantly active and touring since their debut in 2011, the quintet certainly had a lot to offer. Seoulbeats correspondents Mark and Lindsay were fortunate enough to attend the shows in San Francisco and Los Angeles, respectively. Together they’ll answer some daunting questions that have been weighing heavily on their minds.

What were some of the best moments from the show? Whose performance stood out the most? What parts of the show could have been improved? How did this concert compare to other K-pop concerts you have attended? And, of course, who spoke the best English?

Lindsay: I have to say, that B1A4 is the most feel-good, sweet and precious concert I’ve ever been to! Though I’ve attended a fair share of K-pop shows in my time, this one had a different energy than the others. I guess the best way to describe it would be “warm” as Sandeul did during one of the talking sections. You know, part of it is the concept of the group which has always been geared towards a happy country boy type of image, though they also have a lot of what I like to call coffee shop jams these days. All in all, it’s a lighter feeling than the groups that lean towards hip hop or more electronic dance songs. The other part of it is just that their personalities are on the sweet side, in keeping with their concept.

What makes it special, though, is that I don’t think I’ve ever felt an idol was more sincere when they told the fans that they love them and missed them and value them. It’s the type of concert I would want a non-K-pop fan to attend so they can understand the relationship between idols and fans and why it has the intensity it does. They may have had less theatrics or costume changes or intricate set designs than other groups I’ve seen, but the feeling was not lacking at all and I’d trade in fancy light shows any day for the amount of sincere love there was in the room. To put it simply, the concert had a feel-good vibe from start to finish. 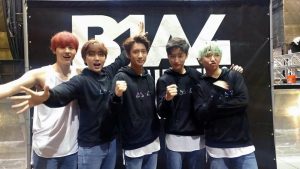 As an older K-pop fan, I admit my favorite part of the show was the “Time Machine Medley” of their singles from earlier in their career. It included the songs that got me into B1A4 in the first place, and obviously that’s why it is part of the show — it’s fan service! As much as I loved the nostalgia of the moment, I am still happy that the group focused the concert on their most recent work. Good Timing is a genuinely good album, so there was no feeling cheated because the focus was on the B-sides. Speaking of good timing, the never ending encore of the chorus of “Good Timing” over and over again was both great and hilarious (and I can’t decide if I’m sad or happy that I was outside of the splash zone).

Obviously, all of the boys gave it their all, but I have to say that Baro stole the show in more ways than one. He worked so hard to be able to talk to the crowd in English, which is something I always appreciate in an idol group that is touring internationally, and he spent so much time just talking to the crowd and interacting with everyone as much as possible, including plenty of attention paid to not only the people in front but also everyone on the second floor. He also had the most consistently high energy out of the group which kept the general energy up the entire time, from his constant refrain of “getting lit,” to his occasional dabbing, to his enthusiastic spraying of water all over the audience. I will say, though, that CNU stripping off his suit and unbuttoning his shirt was more than a little bit distracting there at the end, no matter how crazily Baro was jumping around.

But let’s be honest, all of them were great. The singing was solid, the dancing was clean if not overly insane, and above all else, as I’ve said again and again, they connected with the crowd so well that everything else can be let slide. 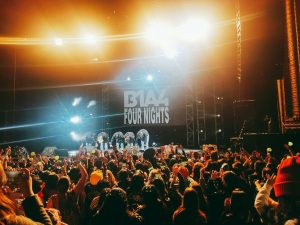 Mark: I have to second that the “Time Machine Medley” was by far the best part of the concert. B1A4’s earlier songs reminded me of when I first got into K-pop, a time when the group was truly at its best. A major regret though was that they did not perform each of their earlier hits in their entirety. This is clearly a sign that they’ve come a long way and have outgrown their past reincarnations. Nevertheless, the concert would have been much more enjoyable, for myself at least, had they performed more of their well-known songs. Instead, the night was filled mostly with B-sides off of their latest album accompanied by more recent singles in “A Lie,” “Sweet Girl,” and “Lonely.” As a more casual fan of the group, I endured not knowing most of the set list and cherished the moments when my favorite B1A4 classics came on.

I too was surprised by how much effort Baro put into addressing the crowd in English. In fact, each member sort of had a few phrases prepared and the translator was needed so profoundly little that I was surprised when I found out towards the end of the night that there was even a translator on hand. I don’t usually pay too much attention to the talking sections but, like Lindsay, I couldn’t help but notice the phrase “get lit” kept reoccurring. I found that rather hilarious for numerous reasons. First, I’m not sure if what I’m experiencing can be described as “getting lit” but I can’t say the same for the other concertgoers who were all glued to their section’s barricade closest to the stage and screaming their lungs out for most of the night. Secondly, I think I may have been hearing “get wet” instead of “get lit” because that would have clearly foreshadowed and forewarned us of what was about to happen towards the end of the show.

I honestly started feeling sorry for the attendees standing in the P1 and P2 sections because the band drenched them worse than a floating tire ride. I knew something was up when Baro brought out a 24-pack of bottled water right before an odd electronic remix of “How Many Times,” and I thought it was hilarious how the group suddenly turned into some punk rock nu-metal band while spraying the crowd with water. And then they came back during the encore and, to the looping chorus of “Good Timing,” drenched the audience four more times! At least the attendees in the P1 splash zone got to attend a high-touch after the show. That way they can dry off a bit before exiting into the unforgiving chill of the night. 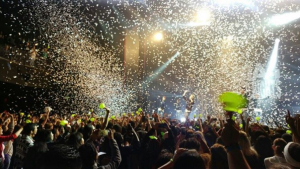 Lindsay: Going to see a group live in concert is always such a different experience than watching them on screen, you know? That may seem obvious, but there are group dynamics that simply don’t show through in pre-recorded videos, even if they are from music shows. When it’s a live concert, you get to see the stage presence of each member. Obviously we’ve both agreed that Baro wins the highest energy award, but other than him the rest of the guys certainly manifested their performance in a much more subdued manner. Jinyoung and Gongchan were particularly quiet and didn’t necessarily stand out individually. That’s not to say they weren’t a valuable part of the performance or that they didn’t interact with the crowd; it was simply that attention was easily diverted from them to Baro or CNU (or Sandeul when he was singing). CNU certainly surprised me with his tendency towards smooth sexiness, something I just wasn’t expecting!

At the end of the day, I can confidently say that I would go to another B1A4 show anytime, anywhere. I found myself envying those fans that got to do a high-touch because I bet that the boys are just as sweet and angelic in person (if not more so) than they are on stage. I also appreciated the smoothness with which the entire event went off without a hitch. The fans were well-behaved and there weren’t any delays, so what is there to possibly complain about? Anyone who is on the fence about whether or not to go to one of their shows in the future, I urge you to go!

Mark: While I wasn’t as enthralled as you were, Lindsay, there were still plenty of positives to take away. I enjoyed listening to Sandeul handle the burden of hitting all the high notes and ad-libs. The speakers weren’t perfect as there was distortion when the singing got too loud but that’s a small sacrifice for experiencing an idol vocalist do his thing. Sandeul is a really talented vocalist and his reputation is surely underrated to an extent. 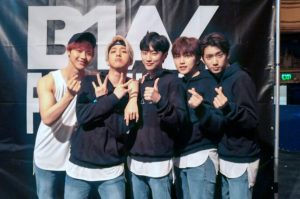 Overall, it was just interesting to experience a different type of K-pop concert. Having covered Block B‘s Blockbuster tour in the same exact venue, I was pleasantly surprised to see how much the two shows contrasted. Whereas Block B had several video segments interlaced between sets, B1A4 actually covered a huge set list because they spent more time performing. The talking segments were more of a brief pause for the members to regroup before launching into the next set of songs. Kudos to their endurance and performance chops!

Lastly, I can’t end the review without mentioning the crowd. It may have just been my vantage point but from where I was standing, there was nothing but high school to college-aged females in front of me. Sure, this is true of any K-pop event but it just seemed to be even more skewed this time around. To me, that shows that B1A4 knows their target demographic and how great a job they do at servicing their much devoted fanbase. When asked, the concertgoers next to me told me they came all the way from Utah to see B1A4, for the second time. Now that’s true dedication!

Readers, were any of you able to catch B1A4 on any of their four US stops? What were your thoughts on the show?