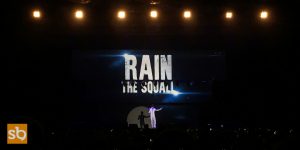 With his last comeback in 2014 with Rain Effect, it has been a while since Rain was active in the scene. After a brief stint with Cube DC, a subsidiary of Cube Entertainment, he moved on to set up his own company, RAIN Company. Aside from taking part in acting projects like Come Back, Mister, he has been bringing his tour The Squall to various cities in East Asia and Southeast Asia. The December 30 show in Singapore marks the final leg of the tour before he gears up for his comeback in mid-January.

After a delay, the concert kicked off with dance tracks like “It’s Raining”—a classic—”I’m Coming”, and “Hip Song”. This was followed by “Love Story”, a wistful R&B ballad delivered with a good dose of melancholy thanks to Rain’s raspy but smooth vocals. The resemblance between his style and that of his mentor, JYP, is striking in the “half-air, half-sound” technique employed here.

Following a couple more slow tracks, including “Handshake”, during which Rain got off the stage to deliver some actual handshakes to fans at the front, the quarter rounded off with higher-energy songs, “One” and “Touch Ya”. Some of the songs I enjoyed best were the oldest ones, like “Instead of Saying Goodbye” from 2002 and “How to Avoid the Sun” from 2003; listening to them was like entering an old school K-pop time capsule. 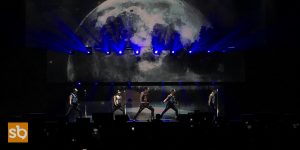 Ask any K-pop fan what springs to their mind when they think of Rain, and the answer is more than likely to be that he’s a great dancer. He certainly delivered the moves, with some wacky moments like an arm-wiggling dance (the predecessor of 2PM‘s spaghetti-arms dance in “Go Crazy”, maybe?) during “With U” and a 1960s-style swim dance in the retro “Fresh Woman”. His backup dance crew, who took centre stage for a couple of dance breaks, also merit special mention for their skills. The concert rounded off with one of his best-known hits, “Rainism”, and an encore remix of “La Song”.

Rain’s live singing was solid (though the sound system didn’t capture his belting very well), and the quality of his dancing did not diminish despite the physically demanding  nature of the setlist. Given that I wasn’t into K-pop yet when Rain’s musical career went into full swing in the early 2000s, it was surprising how familiar so many of the oldest songs sounded. That his music entered my K-pop subconscious is a testament to his enduring influence in the scene; even just yesterday, BTS performed a cover of “Rainism” for the MBC Gayo Daejejun.

However, while the concert might be satisfying enough for long-time or hardcore fans as an appropriate throwback to previous hits, it lacked thematic coherence and flow. The songs were arranged to allow less strenuous performances at appropriate intervals, but didn’t do much by way of varying the mood or sustaining the crowd’s energy level. The videos introducing selected tracks also appeared dated, accompanied by cheesy captions in fonts from graphic designers’ nightmares.

Another pressing reason why I couldn’t find myself fully involved in the atmosphere lies beyond the concert itself. During the press conference held on December 29, Rain not only arrived late, but was also visibly uninterested. He provided extremely vague answers that barely addressed the questions—for example, in response to a question on what Singapore dish he liked, he claimed that he “loves all Singaporean food and people and everything about Singapore”. It wasn’t an issue of being lost in translation either—I could comprehend what he said in Korean, and the English interpretation was close enough.

Some of the questions were indeed uninspiring, but the press conference lasted all but fifteen minutes, and it was difficult to see why he could not have borne it with more grace. He barely made eye contact with the emcee or his translator, and spent most of the press conference staring at the air in the middle of the room. His behaviour was unprofessional and smacked so strongly of insincerity that I found the impression hard to shake even as I tried to enjoy the concert. 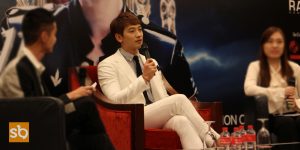 Questionable etiquette aside, Rain did comment briefly on his upcoming comeback. He revealed that his upcoming title track will be a R&B song, a genre familiar to him. In addition, he mentioned that for the new album, Psy has been working with him as a producer, and despite their different niche areas —Psy’s style being more retro and comprising EDM elements —the results have been satisfying. He also revealed plans to debut a new boy group — which will be his second since MBLAQ — with a strength in performance, by 2018.

Readers, are you looking forward to Rain’s comeback on January 15? Keep an eye out for our review coming in a fortnight!

(Watermarked images via Seoulbeats, all other images courtesy of StarSpeed Entertainment.)