Series Overview: Heart and Hijinks in "Come Back, Mister" 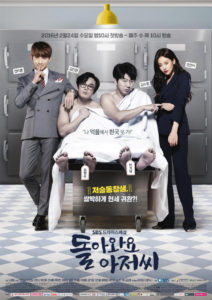 SBS drama Come Back, Mister, a drama adaptation of the Japanese novel Mr. Tsubakiyama’s Seven Days, was another drama swamped in the ratings battle by the monster that is Descendants of the Sun. But despite what the ratings say, Come Back, Mister was a drama with its own appeal. Overall, it was fun drama with hijinks and heart. Though some of the dramatic elements got slightly tedious as the comedic elements faded to the backdrop, we got a good portrayal of both romantic and platonic relationships that were so strong, characters were willing to die for them.

Come Back, Mister stars Rain as the reincarnated version of Kim In-kwon‘s character, Kim Young-soo, along with the non-ghost version with the same body, illegitimate genius son of Sun-jin Group’s CEO Lee Hae-joon. Kim Young-soo’s wife, Shin Da-hye, is played by Lee Min-jung. Though Rain did a great job as the awkward, pushover ahjussi and the wacky Crusoe-esque character Lee Hae-joon, the star of the show was Oh Yeon-seo with her portrayal of the gangster ahjussi Han Gi-tak (called Han Hong-nan while in the female body), played by Kim Soo-ro, stuck in a young, attractive woman’s body. Honey Lee plays Song Yi-yeon, an actress bogged down by scandals and Gi-tak’s first love.

In the drama, the ahjussis escape the train to heaven and are allowed chances to finish their unfinished business in the living world. The premise is wacky, but that’s the appeal. 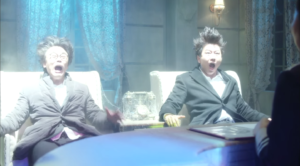 Though it is sad seeing our ahjussis leave at the end of the drama, during their return, all of our characters grow and learn about themselves and one another. It’s nice that the drama does not really focus on how the ahjussis die, but rather how the ahjussis are able to learn more about and heal their loved ones after returning from their premature deaths.

Young-soo learns that he didn’t really know his wife, and his wife didn’t really know him either. Though they both loved own another, Young-soo spent too much of his time at work, and Da-hye was subsequently unable to share her story or her day-to-day feelings with her husband. After returning to the world of the living, Young-soo is able to spend more time learning about her and his family while improving the employee situation at the Sun-jin Department Store so others like him would not die due to the inhumane treatment of employees. 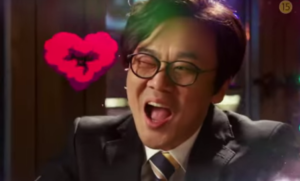 However, it seems dissatisfying that Young-soo acquires the body of the CEO’s illegitimate son. This position allows him to do whatever he wishes, and it allows his problems to be solved quite easily. The story could be exceedingly different — and a little closer to reality — if Young-soo did not have the luxury of being a rich and handsome man.

At the same time, the endearing characters make the ease in which the problems are solved something that the viewer could approve of because we just don’t want to see any of them suffer. After all, Young-soo is impossibly nice, his wife is kind and hard-working, and Young-soo’s father and child are also impossibly lovable. With a family that has so little but deserves so much, it’s easy to overlook how they got justice, and it is satisfying that they get it at all.

Gi-tak, on the other hand, helps his family live on after his death. He keeps his ex-gangster younger “brothers” out of trouble, and helps Yi-yeon get back on her feet after suffering from scandals created by her jealous ex-husband. 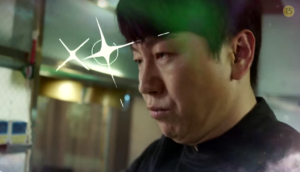 Gi-tak’s acquisition of a female body make for some extremely complicated and comedic gender dynamics. First of all, the female body he inhabits has female instincts, which leads to a comedic kissing scene between the ahjussis. Then, there is the Gi-tak and Yi-yeon attraction because they’ve been in love since they were young, which is then complicated by the fact that they are both women and Yi-yeon doesn’t know that the female is Gi-tak.

The most confusing relationship from a viewer’s perspective is the relationship between female Gi-tak and his former lackey Seung-jae (5urprise‘s Lee Tae-hwan) because Seung-jae is clearly enamored with Gi-tak in his female form and Gi-tak is completely oblivious to this. There is something strangely appealing in their relationship in that it can easily be romantic. Even knowing that Oh Yeon-seo is technically an ahjussi, the aesthetic of a young man and woman paired together, along with their reciprocated care and willingness to sacrifice, makes them work in the traditional pair-bonding way. The drama’s simple portrayal of gender dynamics for comedic purposes makes one consider the fluidity and importance of gender, as well as the fine line between platonic and romantic love. When does a relationship veer into the romantic, and when does it stay platonic? If Gi-tak were actually a young female, would the relationship between him and Seung-jae be completely different? 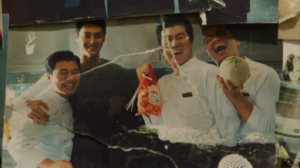 Though the ending was nice in that the ahjussis were able to love and protect their loved ones, what’s left of the human world was not quite so satisfying. Erasing Han Gi-tak’s existence from the world was frustrating. He played such a large part in so many people’s lives, and it seemed unfair that they should lose him. Though it does seem as though Yi-yeon remembers him, the elimination of his image from all of his pictures is pretty solid proof that he no longer exists.

Also, what we see portrayed in the human world after the ahjussis leave presents a number of questions: is Yi-yeon really going to go back to the ex-husband that made her life hell? Because they sure look chummy in that ending scene. When the real Lee Hae-joon comes back, will all that Young-soo did in his place come to naught? And what happens between Lee Hae-joon and Da-hye? And Da-hye and her ex-boyfriend? Though the drama is more about the dead than the living, if we were to see the lives of the living, a more definite ending clarifying the relationships formed between the living and how they come to cope with their losses would have been preferred. 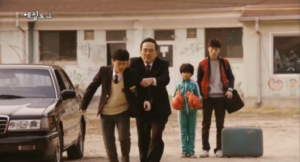 Also, it seems completely unnecessary that the characters are shown to be all connected. It feels contrived, and feels as though the connections were added in as an afterthought. The characters don’t need to be connected prior to the events of the drama because the bonds formed by relationships forged during the drama are enough.

The ending scenes bring up so many unanswered questions and dissatisfaction that it seems as though the ending might be better if the people that are alive were not addressed in the end, and if their lives are left to the imagination. Instead, we should have had a scene showing the ahjussis partying happily in heaven after leaving the living world with no regrets. And the party wouldn’t be complete without their angel Maya (Ra Mi-ran), of course.

Overall, Come Back, Mister was a fun drama with some great comedic and thought-provoking elements that caused both laughter and tears. The return of the ahjussis reminds us that we don’t have the opportunity to come back to life; we never know when this fragile life of ours might disappear from our fingertips. Therefore, we should consider getting it right the first time and treating the people we love properly.

What did you think about Come Back, Mister as a whole? Was it disappointing or did it exceed expectations?