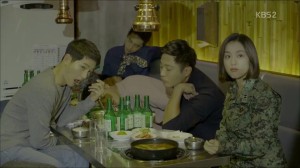 If you thought last week’s episodes were awkward and cringe-worthy, just wait until you check out this week’s episodes. From bad drunk acting to not-so subtle product placements and increasingly unnerving plot holes, it very well seems that the series has lost all of its original potential and spark, leaving us with bits and pieces of a drama that could have been stellar, had it not reduced itself to just another Kim Eun-sook rom-com that just happened to have guns, blood, and Song Joong-ki in it.

After wasting ten episodes of the drama building up a potentially compelling narrative in Urk, the series’ protagonists have finally returned to South Korea to sort of pursue temporary civil lives. Kicking off this week’s episodes is the cheerful reunion of the Haesung medical crew with the rest of their colleagues at the Haesung Hospital. While Doctor Lee Chi-hoon (Onew) and his wife Doctor Jang Hee-eun (Jo Woo-ri) are adorably reunited, Doctor Kang Mo-yeon (Song Hye-kyo) is faced with the reality of confronting the hospital’s director who has taken a serious liking towards our female lead; and if that isn’t enough, Mo-yeon also has to deal with the bane of her existence that is Doctor Kim Eun-ji (Park Ah-in) who is certainly kicking it into high gear when it comes to being especially annoying in these episodes. 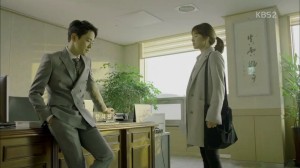 Sadly, after Mo-yeon submits her letter of resignation to the hospital director, her attempt to free herself from Haesung fails when the bank refuses to give her a loan for her new clinic. In the end, she winds up retracting her resignation and gets herself demoted in a way as the director assigns her to the graveyard shift. This particular development in the narrative — albeit quite small compared to everything that has happened lately — is rather interesting and somehow sheds a bit of light on the on-going corruption and sense of impunity in the hospital. Had the writers banked on this particular plot, then not only will the series become a whole lot more interesting, but it will certainly add more dimension to Mo-yeon’s character in the drama.

Individual character growth aside — as expected of this drama — the respective love teams are continuously enjoying more of the spotlight: Chi-hoon and Hee-eun welcome their first child, Doctor Song Sang-hyun (Lee Seung-joon) and Nurse Ahn Ja-ae (Seo Jung-yeon) continue to showcase more of their adorable, budding relationship, and of course, the series’ leading couples reunite and even went out together on a double date.

However — just like almost every other episode in this drama — some randomly awful events happen, and for this week’s episodes it was the breaking up of Dae-young and Myeong-ju and an out of the blue North Korean plot involving hitmen, double agents, and naengmyeon. For some added thrill, the latter most likely scared die-hard Joong-ki fans for a brief moment, but they were assured upon realizing that this is a Kim Eun-sook K-drama after all and that this is Song Joong-ki that we’re talking about. 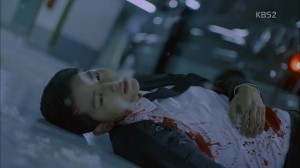 Sad to say for those viewers who might have somehow expected a substantial development in the North-South political intrigue of this week’s episodes, it wasn’t worth keeping their hopes up. It failed to be compelling mostly because it was just way too random — and peppered with plot holes — at this point in the drama and in addition, it was shrouded in over-the-top clichés involving once again some half-baked hero-villain complexes.

In the end, it was definitely quite confusing how the series just suddenly decided to return to South Korea after building up majority of the drama in Urk. In a way, the series might have been able to redeem itself had it managed to create a justifiable and interesting enough reason for going back to South Korea. Sadly, the attempt at creating political intrigue failed, making it seem that the only reason why they decided to transport the drama back to South Korea was so that the series could bombard the viewers with endless product placements that would have seemed way too impossible to do if they were in Urk where Snickers, Subway, and Dal Komm Coffee would be inaccessible for the characters. 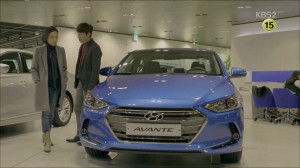 With the series wrapping it up this week, it’s hard to imagine what other strings this drama could pull in order for it to create an appropriately epic conclusion that could match the popularity and hype that has surrounded it since its premiere. Perhaps a character death is in the works or maybe more, but in the end, one can only hope for at least a decrease in obnoxious product placements because by now, it seems that in this particular kind of war, capitalism is definitely gaining the upper hand.