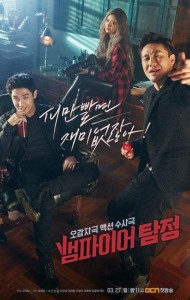 I’ve been looking forward to this drama for quite some time now. Not only did I very much enjoy the precursor OCN show, Vampire Prosecutor, but this show would mark the first lead acting role of Lee Joon since his departure from MBLAQ, and I have to say, based entirely on the fact that I could barely recognize him for the first 30 minutes, the non-idol life is agreeing with him. But, back to Vampire Detective.

Lee Joon plays the titular character, Yoon San, who is a former police detective-in-training turned private investigator. Side note on linguistics: where the Korean legal system sees Prosecutors, we Americans would see Detectives, and Korean Detectives would be considered Private Investigators. This is less confusing in the script itself than in the titles of the shows. Yoon San is supported by his partner Yong Goo-hyung, played by veteran actor Oh Jung-se, and in the first episode they are introduced to the third member of the main cast, the young  Lee Se-young as Han Gyeo-wool.

When the show begins — despite one badass introductory fight scene — Yoon San is not in fact a vampire, yet. The first episode flows very nicely, and quickly, through San’s back story. It starts off while he was still in the police academy, training with his two best friends (the perfect 2 male-1 female triumvirate, played by Jo Bok-rae and Kim Yoon-hye). It’s soon established that his female friend is most definitely more than a friend. The three are given their first official assignment; to infiltrate a gang. Dangerous yes, horrible outcomes a plenty, and so we’re not surprised to next see them running for their lives.

However, we’re thrown a huge twist, which goes on to define the entire plot of the entire series. In their escape from their mission gone bad, San’s girlfriend lures him out of their getaway car by pretending to be sick and then shoots him, before running off again with friend #2. As he’s lying there bleeding out all over the road, calling out pitifully after the fast disappearing car, said car blows up, completely engulfed in flame. 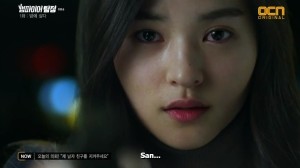 Alright, hold up. That was a lot to handle in the first episode, right? But we’re only ten minutes in and everyone is apparently already dead. This would have been the easy place to transition in San becoming a vampire — he’s been left for dead on a deserted road, screaming out for his now dead girlfriend… but luckily the scriptwriters didn’t choose the easy option.

Somehow, he survives and we see him next in the present day, five years later. He is clearly still affected by his injury: unable to exercise despite pushing himself to, and having to rely on medication to keep his heart-rate under control. He is living with Goo-hyung, who nags after him like a mother, in a fancy house they’re only borrowing, and they’ve barely begun a new Private Investigator agency.

We see the two of them running a couple of cases, in which we realize that San has a natural inclination to spotting clues and discrepancies. He also cannot chase bad guys, as his injury slows him down significantly. Paired with the older, and lazier, Goo-hyung, they make for a hilarious PI team. I assume we’ll lose the comedy of this when San eventually becomes a vampire, but I hope they still manage to play with it somehow.

Then we (and our PI duo) meet Han Gyeo-wool, which finally kicks the plot into gear. Gyeo-wool has come to enlist their help in following her boyfriend (who turns out to be her brother) who has been acting suspicious lately. This would be a throw-away case except Gyeo-wool has a photo of a woman her brother has been meeting, and that woman is wearing a unique necklace not unlike one that San’s dead girlfriend used to wear. San’s emotions and trauma are still so real that he can’t turn down a case that might bring him closer to answers. 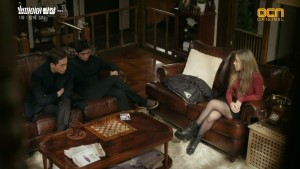 I have to applaud Lee Joon’s acting so far with so many emotional events, such that it feels realistic and isn’t too over the top. I know he’ll continue to make it all believable, though I hope the script doesn’t delve too deep into melodrama.

The rest of episode one is the long story of the three tracking down Gyeo-wool’s brother, getting in the way of the gang that he was involved with (who deal with a large walk-in freezer full of blood, for some reason), and eventually being tracked down themselves by the head lackey of the gang (who’s at the top, you might ask? why that mysterious woman, of course). The ending scene is scripted and choreographed so beautifully that it could stand on its own as a short film.

Han Gyu-min, the brother, has been revealed as a vampire trying to protect his vampire girlfriend. San and Goo-hyung have confronted him at their hideout and unwittingly brought along that head lackey, who takes Gyeo-wool hostage to lure Gyu-min outside. Instead it’s the girlfriend who sacrifices herself in the burning sunlight to save Gyeo-wool.

As she sets mr. lackey on fire, she herself burns up in front of Gyu-min’s eyes. The lackey’s firey, flailing gun shoots off four bullets in the direction of the now prone Gyeo-wool and the stunned San and Goo-hyung. San rushes to cover Gyeo-wool with his own body and collapses on top of her. As the lackey’s screams die off, Goo-hyung rushes after San, rolling him over to find he’s been shot (again) and already coughing up blood.

As Goo-hyung runs off to call 911, Gyu-min watches his girlfriend dissolve in the sunlight, and in a last desperate self-less act decides to use his special vial of blood to save San’s life. The injection of blood instantly heals him and changes more than just his eye color, but he’ll live for now. Then Gyu-min is turning around and immolating himself in the sunlight as well. As Gyeo-wool wakes up and Goo-hyung frantically runs over again with cries of “San-ah! Don’t die!”, the camera zooms upward to show the three lying all alone on the ground with no hint of the trauma that just played out. 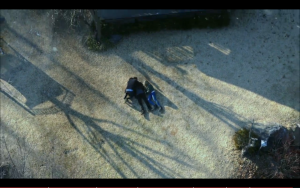 Episode two, by comparison, is positively relaxing. We see more character development of the main three. After the death of Gyeo-wool’s brother, she decides to move in with Goo-hyung and San. No surprise that she’s feisty, and apparently also a hacker as she offers her services in exchange for room and board. This comes in handy as the episodic nature of the series finally kicks into gear. Our heroes have their first real case and have to figure out how to work together.

San has also begun figuring out that something is different with his body after that night. He can exercise without getting tired, he’s started skipping meals, and his eyes do a funny thing whenever he sees blood, allowing him to envision the past happenings that lead to blood being spilled (a la Vampire Prosecutor). Rather than him being a known vampire right off the bat, it’s much more interesting to watch him (and his friends) figure it out. Beyond that, we get another small glimpse at our villains, who apparently have something to do with a blood bank that feeds off homeless people, and another small yet sweet flashback of San and his old girlfriend. 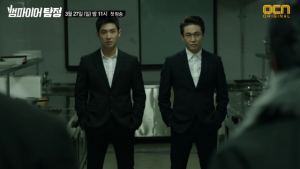 As I said before, episode two is practically a snoozefest in comparison to the first. I hope that either the drama or the cases will pick up more steam to propel it along. So far, I think there’s a lot to be said for Lee Joon’s dramatic yet believable acting, as to be expected, as well as the camaraderie and chemistry between the three main leads.

The bromance between San and Goo-hyung will always be fun to watch, and Gyeo-wool adds a wonderful snarkiness to the trio. I hope she doesn’t become a love interest though. She has such a strong presence on her own, she doesn’t need that to be her purpose in life.

I am certainly looking forward to seeing where the script-writers take us, however if you don’t enjoy the episodic crime drama this is definitely not the one for you, despite the many moments of comedy. San may now be a vampire with super strength but that doesn’t mean he’s immune to drama or stabbing, as we learn during episode two’s big fight scene — much stabbing occurs and there is clearly drama on the horizon.