There’s certainly no lack of 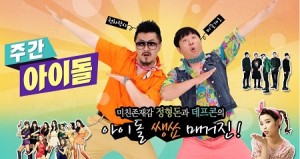 South Korean TV programming featuring idols these days. Fans can see their favorite groups going on vacation, giving advice, cooking, performing and everything in between — but one of the more unusual stops during comeback promotions is a stark white, 3rd sub-basement floor studio at MBC, home to Weekly Idol. Originally hosted by Jung Hyung-don and Defconn, Weekly Idol has recently featured a rotation of guest idol hosts during Jung Hyung-don’s hiatus, bringing new energy to the show.

Unlike the many variety shows with elaborate sets and premises, Weekly Idol has an empty, plain white studio and a razor-sharp focus on the featured idols. Visiting groups can expect to have their every misstep caught while dancing and every false boast inspected by the hosts, and fans enjoy seeing their favorite idols having unguarded, genuine fun.

Popular games from the show include Random Play Dance, where groups have to perfectly match choreography to their songs played at random; and Profile Verification, where the hosts test out various idols talents or facts regarding the idols. Another well-known corner is the Doni-Coni Idol Call Center, where avid fans call in, sometimes hundreds of times, with requests for their idols.

Given its fairly low-tech, “shabby” premise (a long running joke), the hosts have been critical to its success — over the years Jung Hyung-don and Defconn have perfected their role as rude (another long running joke) but caring hosts who praise and playfully tease their idol guests. So when Jung Hyung-don announced a break from all broadcast activities last year, it’s not a stretch to say that no other show was more affected by his hiatus than Weekly Idol. Down to one host, indefinitely, the show turned to their muses: idols. In what could have been a difficult situation, the change up has brought new energy to the show and rewarded viewers with double the amount of idol adorkable-ness. 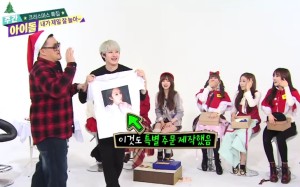 Since Jung Hyung-don’s hiatus, a steady stream of “Don-sa-dols” — idols that Doni loves — have been guest hosts alongside Defconn, drawing in fans of both idol guests and idol hosts. First up was Infinite’s Sunggyu, who went into full on fanboy mode for guest group TWICE. He was followed by Super Junior’s Heechul, who used the opportunity to show off his own talents (see “UP&DOWN” during BTS’s visit) and distribute his own fan merchandise as prizes during the Christmas Party with GFriend, Lovelyz and TWICE.

During Girl’s Generation’s Sunny’s stint, she was treated to a charm parade from the boys of Up10tion and had some funny harsh words for Heechul to show Lovelyz’s leader Baby Soul how to speak up to sunbae Sunggyu. Super Junior’s Leeteuk showed off his expert MC skills and shared leader know-how with Dal Shabet’s leader Serri. Other hilarious moments came from Beast’s Doojoon, who was too shy to make eye contact with girl group guests AOA Cream or Mamamoo, and was totally blown away by Mamamoo’s unending energy. He also made a hilarious attempt at aegyo to cheer up Jung Hyung-don.

True to form, Weekly Idol has continued to welcome idols of all ages, with Shinhwa’s Andy filling in as guest host during Shin Hye-sung’s visit and ballad group Noel making their first appearance while CNBLUE’s Jung Yong-hwa hosted. Despite being groupmates, Andy did nothing to help Hye-sung who was clearly nervous at making a solo appearance, and their guesting combo was one of the best so far.

The most recent guest host was K.Will, and since this has been a winning solution there’s no reason Weekly Idol should stop the idol guest host parade. I expect that some of the Big Byung or Chamsonyeo members will come soon, especially Jackson or Lizzy. Maybe more FNC artists to support their company-mate, such as FT Island’s Lee Hong-ki or AOA’s Choa. It’s a longshot but I personally hope that G-Dragon will make an appearance, now that the MADE tour is over, to show his support for Jung Hyung-Don.

Readers, which idols do you hope will guest host next?