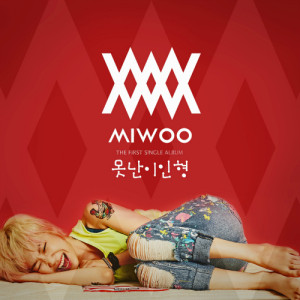 On September 4th Leessang Company’s self-cultivated and immensely talented singer-songwriter MIWOO made her formal debut with the release of her single “Broken Doll.” Before understanding what labyrinthine musical experience I was entangling myself in by selecting MIWOO as the focus of my next MV review, I had envisioned her as an androgynous artist out to style the music industry with a possibly unique R&B or jazz vocal color.

To my surprise “Broken Doll” (and MIWOO in general) is the embodiment of a declarative femininity thrashing open the standards of beauty set by the superfluous world with its playfully abstract plot, supremely composed lyrics, cacophonous melody and stunning cinematography.

As a viewer looking in, the MV unfolds in the likeness of a sweetly-prepared flower sitting in field of frivolity, ready to be taken and used by the hands of those who only have the capacity to admire its exterior. Decked out in a visually subtle color scheme with the camera immediately creating a rather blurry and rushed focus, we see a moustached oaf who most probably is a toy collector wandering through an enigmatic factory admiring the life-sized dolls. As you might have it, the presence of the toy-collector in “Broken Doll” personifies an underlying profundity that is quite evident when one thinks of the overall concept of the MV. He is standards and rigidity walking on legs – MIWOO intends for him to be the flippantly discerning eye of the world, in which the most beautifully decorated doll is the one that is he picks and therefore most valuable.

In reality, it is utterly difficult to feel confident in one’s own skin while restlessly and overtly being forced to beautify oneself. Hence MIWOO’s “Broken Doll” is littered with lovely girls that are as animate as a soulless doll, their beauty garnering them nothing but a spot in a glossy display case or on crocheted shelf; what lives inside the pretty doll is a human being with the desire to be who she really is – a beautiful, important, and lively girl breaking free from the shackles of conventionality. 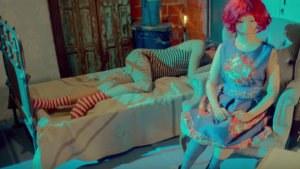 Meanwhile the “broken” terminology in MIWOO’s MV and song has a twofold meaning that can be looked at subjectively; MIWOO is the broken doll because she has embraced the girl living inside of her and wants to come out as herself, thus she is broken because she is no longer subscribing to set standards by adorning herself and sitting prettily for the shallow-minded.

The melody contained within “Broken Doll” is as I had expected of an artist buffered by the musical expertise of Leessang, R&B with a hint of memory-absorbent ballad. Soft drum beats that causally become brassier are accompanied by electronic chimes and beats as MIWOO’s husky voice filters into the song and efficiently takes over, emphasizing the complete melody with vocal pressure put on certain verses like “Have you ever seen a sad face of a little girl with tears” and “Red hair, freckles everywhere, hiding a nasty temper, showing the perfect smile.” 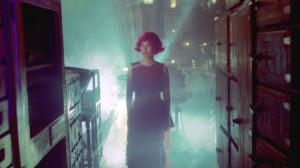 The chorus of “Broken Doll” fuses together the universality of English and MIWOO’s raspy voice as she urges girls to realize how beautiful they are and unlock their true selves. Trailing behind the chorus is an electronic reiteration of how we are all broken dolls, cementing in our minds the impossibility of set standards of beauty.

The bridge of “Broken Doll” perhaps is MIWOO’s last gift to the pretty dolls she has left behind after liberating herself (signified in the MV by her pulling of her prim wig and revealing her messily cropped blond locks) and declaring “Don’t be a pretty girl, don’t hide yourself anymore.” MIWOO’s voice delves into a magnificent vocal range as she runs amok and passionately attempts to deliver an insightful message about what it really means to be a pretty girl, which is keeping yourself the way you are. Through “Broken Doll” MIWOO stresses that restricting yourself and losing your inner beauty for the sake of appealing to the shallow minds that inhabit the world is never worth it. After listening to this brilliant composition from MIWOO, I can’t wait to see the next message she delivers through her self-composed music!