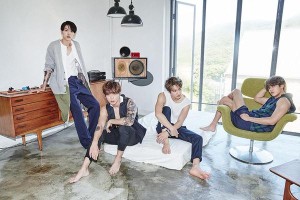 A year and seven months since their mini album Can’t Stop, CN Blue have finally made a Korean comeback with their second full album 2gether. Since their last Korean promotions, the band has had a period of increased solo activities. Yonghwa had his solo album at the start of this year. Jonghyun increased his appearances on variety shows and also had his first lead role in a drama. Minhyuk was a regular on a few variety shows and Jungshin also dabbled in variety and drama. Each member has steadily gained more individual recognition and the group’s return with “Cinderella” has been highly anticipated.

Yonghwa was heavily involved with the creation of “Cinderella.” He helped with the composition, lyrics and arrangement of the song. The song is definitely more pop than the previous material, but I did like that Jonghyun had more parts in the song. But to be honest, “Cinderella” sounds like the CN Blue take on a recent Maroon 5 song. There are more synth and electronic elements integrated into the song. That might be great for fans of that style, but for me it was extremely lacking.

The song itself uses the hook “Somebody help me” to compel the girl to stay the night with them. The rest of the lyrics use the folk tale of Cinderella loosely in conjunction with the lyrics trying to woo the girl. In the popular Cinderella tale, the protagonist escapes before midnight because her fairy godmother’s spell only stayed in effect before the clock strikes twelve. The only real connection CN Blue makes to between the girl of their lyrics and Cinderella is that they both do not stay past midnight.

I also raised my eyebrows at some of the lyrics of this song. Some of the lines sound a bit desperate as they implore someone to help them during the hook while also lathering the girl with promises of good treatment:

“I’ll treat you like a princess, oh my princess

Don’t worry, I’m different from all the other wolves.”

There is a fine line between asking and coercing, and they alternate between these sentiments especially when they sing “But I can’t let you go today girl.” If someone has second thoughts or is uncomfortable doing anything in a relationship, applying more pressure is quite a lousy thing to do. While CN Blue traipse that line with their lyrics, the story does lack depth or substance beyond these repeated attempts at wooing this girl.

The MV also lightly touches on this Cinderella theme. There is a girl, played by Seo Yi-an, that they each meet at different locations. At first, the audience sees Jonghyun and Seo Yi-an getting more intimate while they are at a car wash, but just as they are about to kiss, she disappears and only leaves her glass bedazzled slipper behind. 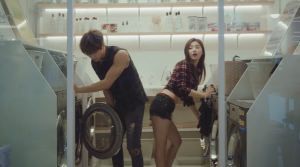 This is reiterated in each member’s individual story arcs. Minhyuk does laundry and after he and Seo Yi-an bump hips (not sure if it was accidental or intentional), she apparates into thin air, leaving her shoe behind. Jungshin and the lady also have a bump in with one another on the stairs as he rushes by her with a handful of papers. When he turns around to get a second look at her, he notices that the only trace she left behind was solely her shoe. Finally, Seo Yi-an was helping Yonghwa with shaving but in the middle of shaving a part of his face, she disappears.

The video does not really move forth with plot beyond that point. The members try searching for this girl. Shots of them either running around looking for her or sitting around pondering where they could locate the girl are intermixed with shots of the band playing. There are some moments where the MV tries to show a greater depth to the relationship she has with each of them, but they came towards the end of the video and by then, the audience is left more confused by where she went rather than feeling any genuine connection between her and the members. At the end of the MV, the members are only left with memories of her.

Unfortunately, “Cinderella” is my least enjoyed CN Blue title track to date. The lyrics come off desperate sounding and the lines lack depth. I did like that Jonghyun got more lines as his voice has a great tone to it, but the song did not stick with me. The pop synth heavier sound is an interesting change up for the group, but the hook is lacking and feels more repetitive with each additional listen. The video has a simplistic theme and is succinct, but the lack of connection in the romantic pair-ups, omission of a conclusion and predictability of the stories all contributed to a lackluster MV. As a fan of the group’s earlier works, I wanted to enjoy “Cinderella.” However, even under all the gloss of the production, the song and MV were disappointingly shallow outputs for a band that is capable of much more.