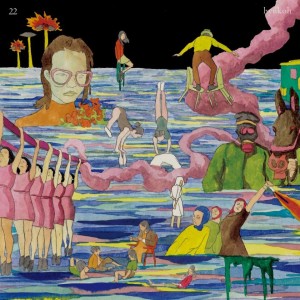 Hyukoh is a band that’s been dancing around national notoriety for a couple years now. With last year’s 20, lead singer Oh Hyuk and his band of brilliant musicians — Lim Hyeon-jae on guitar, Lim Dong-geon on bass and Lee In-woo on drums — brought listeners an eclectic mix of genres that has quickly defined their core sound and lends itself in supreme fashion with their follow-up 22. Collaborations with the likes of Tablo and Primary have led us here, to an album that crushes the barrier between genres and gives a sound that’s simply marvelous.

The album opens with a ska-inspired piece of soft rock, a perfect compliment to the textured softness of Oh Hyuk’s pleasant voice. “Settled Down” eases the listener into an experience that’s equal parts jazz as it is blues and soul, and elements of rock sprinkled in give the sound edge and color. With it, we’re gifted Hyuk’s rounded English, an aspect of the album that’s at once surprising and welcoming, as if to say everyone is invited to spend time with the band and learn about them over a bottle of soju. Lyrically it’s a bit more abrasive, an ultimatum to a lover: try with me or just leave.

While not exactly what you’d want to greet you when you got home, there’s still a charm to the song that urges you to continue with the album. Ultimately, you’ll be thankful you did.

Lead single “Comes and Goes” opens up in a similar vein as “Settled Down,” a soft swish of guitar wrapped around Hyuk’s throaty tenor. We then edge into something a bit funkier, a swing and sway that gets the listener engaged and keeps her that way as the song progresses. It speaks of memories, of the childish games we play, and how youth inevitably has a way of catching up to us, even as we try not to look back: “And we play comes and goes, ’cause we did this when we were child before. And we play comes and goes, ’cause big boys still play the game all the time.”

“Big Bird” then swings in on a sweeping guitar lick and Hyuk’s high-flying tenor. It’s almost an answering bit of positivity to the song preceding it: the games of youth spilling over into adulthood. But now we look back on those things with fondness. Hyuk implores us to take time and enjoy life around us, not to get caught up in the act of being an adult because soon enough it will all be gone. For now, our journey’s just begun. We’ve got so much to look forward to, so look back with happiness at the memories made, but don’t let them swallow you up and make you forget the memories you should make in the here and now.

And then the album leaps into a rhapsody that had me swaying and keening with its unbelievable beauty.

“Mer” is as ethereally stunning as the mermaid for which the protagonist longs for. There’s an elegant beauty in the song that wraps around a listener, sending her thrushing along in the tide and seeking something warm to hold on to. If I’m being quite honest, I have to admit I saw stars while listening to this song. The longing in the drums, the elegance in the guitar, the magic in the voices. It all melds together to create an almost eerie loveliness. A listener can get trapped in the sound, as if ensnared by a siren on the sea, and though the death would be brutal, the sensations would still feel as gorgeous as the song of the beautiful beast. Our protagonist speaks of a dangerous love, the type of love where nothing in the world, even in the midst of turmoil, registers.

“Mer” fully encapsulates everything Hyukoh represents musically: a sound so large it becomes more than just the sum of its parts. It’s everything in the universe, a call for people to embrace art, embrace life, embrace beauty again.

Following the crest and fall of “Mer,” we get “Hookah,” a whiskey-tinged blues that wraps pleasantly around the silken tease of Oh Hyuk’s Korean. When he begins to sing in English, the sound takes on the bite and snarl indicative of the raw honesty of the blues and the ache of soul music. The song essentially is a cry for acceptance. Our lead singer is who he is, without apology. Though he’s still trying to navigate exactly what that is, he’s not about to try and change.

I wanna, wanna be like this
Why always try to leave me alone
I keep my head up
and keep my mouth shut
why always need to wait for so long
I keep my way
do things my own way

As soon as the pretty roughness of “Hookah” settles, we’re given a chance to experience the purity of Hyuk’s voice. With just a guitar, keyboard and vocal, “Gondry” is a pleasant return to the smoothness found in the previous tracks. The lovely amber tone of Hyuk’s voice is what propels this album to the greatness that it is, and “Gondry” expresses this with all the simplicity an acoustic track affords. It’s a pretty love song, speaking of sitting in the sunshine and letting the warmth of it envelope our protagonist and his lover: “Sitting on the sunshine, sunshine is over me, she gets over me. Make us feel alive.”

22 is an album of ebbs and flows, music that at once crests, crashes, then stabilizes, giving listeners a chance to fully experience the expansiveness of sound. Each track on this EP holds a lasting impression, creating music that stings and soothes all in one breath. A beautiful collection of songs, 22 is a step closer for Hyukoh in terms of musical maturity and sonic evolution. While each composition holds a level of complexity, the album is quite simply a celebration of music and the desire to expand the medium to fit around Hyukoh’s desire to jam.