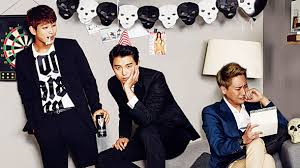 Marriage, Not Dating, where have you been all my life? No, seriously, this is the show that I have been desperately waiting to see for since I got into dramas. It’s quirky, addictive, and balls out high-larious.

Marriage, Not Dating, is what happens when you take Boys Over Flowers, remove the soap and pureness of love, and replace it with wacky hijinks and some truly devious plots and plans. Joo Jang-mi, played by Han Groo, is a department store salesgirl who has decided to pop the question. Unfortunately, while Jang-mi was in this relationship for the long haul, her boyfriend, Lee Hoon-dong (Heo Jung-min), was decidedly not. When faced with an overly-devoted girlfriend, Hoon-dong calls for aid from his best friend, Gong Ki-tae.

Yeon Woo-jin is absolutely amazing as Ki-tae. This is a character who no one should like. He actively tries to be an utter prick, and frequently goes above and beyond the call of dickery. He is so used to getting drinks tossed at him that he has the reflexes to shield his glasses and phone. And yet, you cannot help but feel bad for him. Ki-tae is the only male born to his wealthy family for three generations: they’re all desperate to see him married, and Ki-tae just wants left alone. He’s blunt to the point of rudeness, because if he’s not, no one will listen to him.

Through a series of misunderstandings, Ki-tae’s family comes to believe Jang-mi is his serious girlfriend. Imagine their horror when they learn she’s a lowly salesgirl whose parents own a dive bar. Realizing that his family will never let this relationship stand, Ki-tae hatches a scheme. He and Jang-mi will pretend to be madly in love, and when his beloved (s)mother inevitably breaks them up, Ki-tae will simply never get over her. Every blind date, every nag for grandchildren, each “You are the only son” speech will be defeated with a wistful “Jang-mi” for as long as he lives. The only issue is that he actually has to date Jang-mi, the optimistic people-pleaser, until they’re broken up. You can smell the hijinks a mile away. 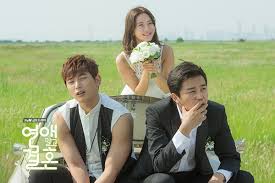 Marriage, Not Dating really works because instead of depending on the zany plot to provide setups for jokes and hilarity, it just pokes fun at the plot itself. The funniest moments come from Ki-tae and Jang-mi just being in the same room, trying to make their faux-Cinderella story work. Ki-tae as the love-struck reformed player against Jang-mi’s bad acting as a gold digger is magic. The whole idea of a grown man faking a relationship in order to get his mom off his back is balls-out ridiculous, and it’s really nice to have stupid plans and a bastard rich boy be the punchline instead of something to be taken seriously.

The sheer ludicrousness of everything is amplified by the perspectives of the side characters. Hyun-hee, Jang-mi’s, coworker and bestie, is in on the whole shebang. . .and doesn’t ever fail to point out how doomed this endeavor is. Meanwhile, everyone else– Yeo-reum, the hunky waiter (2AM‘s Jinwoon), Se-ah, Ki-tae’s ex-girlfriend (Sunhwa from Secret), Hoon-dong, Ki-tae’s and Jang-mi’s parents– are just floored by the whole thing. No one can comprehend that Jang-mi won over Seoul’s Most Devoted Bachelor, and yet they buy it. They buy it because they have literally seen this story before. It’s one of the most common tropes in dramas, and whenever this scenario comes up, it’s either A) a gold digger or B) true love. And as everyone realizes it’s not A, they automatically assume it’s B. Not one person is willing to admit that this relationship might be fraudulent, and that colors their treatment of it in varying forms of humor.

The format of Marriage, Not Dating is one of the most unusual ones I’ve ever seen on a TV series, eastern or western. The whole show runs off the trope of “How We Got Here” , one of my personal favorites. Instead of starting at the stories’ beginning, each episode opens with act 5, before rewinding anywhere from seventeen hours to four days to show just how Jang-mi ended up in court with Ki-tae running to her defense. It serves the same narrative function as a bomb under the table: No matter how slow or unneeded a scene seems, it plays a role in getting Jang-mi to Ki-tae’s parents whilst drunk off her ass. While most shows dabble with it once or twice, Marriage, Not Dating has made it clear this out of left field approach is not going anywhere. It’s risky, but the pop it provides has managed to win out so far. 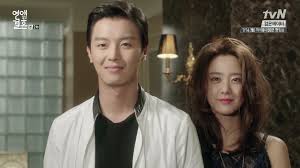 There is one element, though, better than hijinks or new perspectives on an old favorite or an oddly awesome narrative approach, that has rocketed Marriage, Not Dating to my favorite drama of the year so far, and sending it up the ranks of favorites ever. The characters are stunningly well written. One of the biggest flaws in TV writing is the tendency for side characters to devolves into satellites of the main characters. They have no ideas or motivations outside of their interactions with the main characters. That is not the case here. Everyone has their own thing that occupies their time, to the point that you almost want less of Yeo-reum courting Jang-mi and more Yeo-reum pursuing his chef-ly dreams. There could easily be spin-offs based on everyone, and with more than enough story to fill them.

Marriage, Not Dating is easily one of the tightest-written series’ ever. It’s funny in a fresh way, and has so far managed to include suitable drama without devolving into melo-light. Let’s keep it that way, please. How are you liking Marriage, Not Dating, readers?