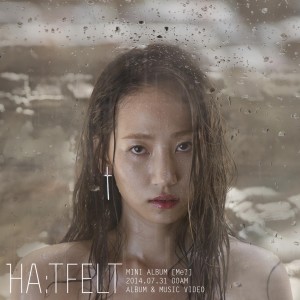 The past year has been a rocky one for the Wonder Girls and their fans. Leader Sunye not only got married, but also renewed her contract while still deciding to take a hiatus from the K-pop industry. All this on top of Sohee’s decision to not renew her contract with JYP Entertainment led to speculations that this was the end of the Wonder Girls despite JYP’s denial of disbandment.

With Sunye’s hiatus, the most obvious decision for the remaining members, aside from their individual activities, seemed to be that of solo promotions and sub-units. Although rumors of Yubin and Lim forming a sub-unit have been circulating for a while, the first confirmed activity from the Wonder Girls is none other than Yenny’s solo debut!

Going by the stage name HA:TFELT (“hot” + “heartfelt”), she will be releasing her debut mini album and title track MV on July 31st. Both are titled “Me?” perhaps indicating songs of love and personal reflection.

The music accompanying the teaser is a step away from the retro pop that shot the Wonder Girl’s to fame and closer in style to something like “Girlfriend,” a song which Yenny both wrote the lyrics for and participated in the composition of. Hopefully her solo album will contain more tracks written and composed by her.

Be sure to check out the album teaser below and let us know what you think in the comments!