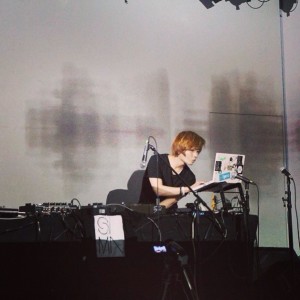 Though there’s a bit of electronic lo-fi coming from South Korea, artist Sima Kim is attempting to bring a new shade to the scene with his musical perspective. Born in South Korea, then growing up in Europe, Kim was exposed to several musical landscapes as a child. He harvested this knowledge and began studying music in earnest at the age of eighteen, getting a degree in musicology. Travelling across Europe and Asia (Germany and India, respectively), he gained a deeper, more eclectic understanding of the world and all its sounds and began to create his own compositions.

While he’d released several individual songs on different compositions for labels including Future Sequence, mü-nest, and Twice Remembered Twice Removed, Kim’s own fully realized work articulated his classical education and musical scope. His first release, simply titled Songs, is a powerful story in two movements (also simply titled: “I” and “II”). It’s from his earliest works that you can glean his classical training and intimate knowledge of how music communicates within itself and to those who dare to listen. There’s a decidedly organic shape to his music, something simple and uncluttered yet surprisingly complex in emotion and sonic definition.

Kim’s experience stretched far to include a number of collaborations, including Japanese artist Yuco and, most recently, experimental artist Wouter van Veldhoven. His ability to coexist with like-minded artists and create a mutually expansive universe of depth and color highlights a musical vocabulary that’s at once singular and universal. He’s fearless and expressive, allowing space for any other artist with an inclination to create music on a higher plane of existence. The result is albums that seem to pull sounds from the surrounding area and spatially modify it to fit within the confines of Kim’s imagination.

Sima Kim has so much pent up inside him, as if he’s swallowed too much knowledge and is aching to purge it back onto the world. In 2013 alone he released seven albums on his Bandcamp website. It’s almost like he makes his home in another universe, one that’s covered in a hazy gauze of small crystals and tiny bursts of energy that make up the moments of largeness in his music. It’s truly the lowest of the fi, a sound that doesn’t insist upon itself, doesn’t exaggerate its presence. His sound is a compilation of classical instrumentation and organic thought, like freeform writing. When the mind is let loose, there’s a moment of hesitancy, a period of repetition, and most certainly an unexplained tension — like a wire being slowly turned around a tuning fork. Once the fork is struck and the wire coiled, the pressure of all that unexplored sound builds up and creates a thrumming in the fingers that’s dissonant and angry.

Album Faded is an excellent example of what happens when that fork is left to sit on the table. There’s something simmering underneath the surface of the sound, something that’s dying to be let loose. However, the energy is allowed to exponentially accumulate, making the very table itself vibrate from the residual need for release. It’s almost like elongated foreplay: each song and the moments therein another stroke or pet or tickle, titillating the skin, slowly scraping at the itch, but never sating the desire until the very last moment, when everything explodes and your lover is introduced to a new layer of their humanity.

Kim’s latest work shows a want to expand his musical universe and give it a bit more depth. Still working within simple compositions, album Debris has an added layer of darkness, an almost sinister crawl up the listener’s body until it reaches the ears, then inward to the mind until it complicates the psyche and forces one to close their eyes and alter their sonic palate. Whatever then manages to express the power of music, giving it thrushing tones, like waves breaking over a cragged cliff bed. He doesn’t push the sound to be big and brash, but by its very nature it is. The pulse of the music is thick and heavy, but the sound garnered from a bit of piano and a repeated count of eight is light enough to lull the listener into a sense of warm comfort.

With his most recent release Ur Silhouette, listeners are gifted with the culmination of Kim’s work to this point. Released in March, instead of ushering in spring, it seems to be the lingering angst of winter, which in its waning moments still crackles its defiance against the sun. He’s begun to put purpose and agency behind his notes. Now voices are added to the mix, as if Kim has decided to include the mark of a human print on his forest floor. It’s bold, powerful, unapologetic. There’s chaos here—the tuning fork slowly being unraveled. As each loop loosens, the wave of energy becomes larger, the reach going further and touching everything within its radius.

What’s so incredibly exceptional about Sima Kim is that he’s managed to bring his expansive knowledge quite literally down to earth. He parses music down to its simplest parts, creating patterned sounds that resonate and enlighten. It’s not about how large he can make his sound or how best and bright he can show off his training, technical knowledge, or worldly experience. It’s about how he can take even the heaviness of an organ and strip it down to the weight of a whisper. Though many may not understand the significance of breaking sound down to its barest parts, the fact that he’s been able to do just that proves that he’s got an almost esoteric connection with music that allows him to cradle and nurture it to foster new ways of expression.