The Risk and Reward of Athletic Variety Shows 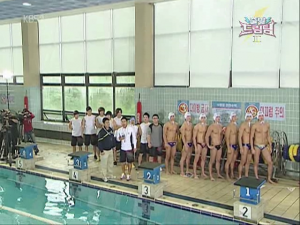 Variety shows are a staple of Korean popular media. But for K-pop fans, they also offer the opportunity to see our favorite idols in a more casual setting where their personalities, not their singing and/or dancing prowess, or lack thereof, come center stage.

The great thing about variety shows is that there are so many to choose from. Want to hear someone tell interesting and/or odd personal stories? Check out videos of “Strong Heart.” Or, maybe you would prefer seeing them do wacky activities with some of Korea’s popular comedians and television hosts. If so, there’s of course “Running Man” or smaller ones like “High Society.”

Variety shows allow for idols to showcase themselves in very different arenas, and often, it is appearances on variety shows that can make a group on the cusp of popularity reach the limelight a little bit faster.

There are, however, some variety shows that are best left at the drawing board of broadcast companies. And mainly, these involve shows where idols are expected to perform athletically.

Athletic-based variety shows are a great idea in theory. You get the showcase aspect easily, as the most physically fit members of K-pop groups usually participate and impress fans with their athleticism. You also benefit from the appeal of outright competition. These shows have winners and losers, and often we see idols really striving to perform well. Without it, we wouldn’t be able to see Minho of SHINee get so fired up when he loses or see BtoB’s Minhyuk surprise everyone with his running skills.

This also lends to the third true appeal of these shows: idol interactions. Athletic-based variety shows typically take a long time to film, simply because the events require a lot of preparation and waiting-time in between events. In turn, idols spend a lot of time waiting around with their co-participants, usually making chit-chat and goofing off.

This, interestingly enough, is often the main reason why fans pay attention to athletic-based variety shows.

Fan recordings of shows like Idol Star Athletics Championship are always in high demand and are highly viewed across social media, simply because many are curious about how K-pop groups interact when they are offstage and (supposedly) off-camera. It’s a part of the get-to-know-you game that is so highly regarded in K-pop fandom.

But, for all of the great things that athletic variety can provide, the liability is still astronomically high.

One of the newest additions to the athletic variety show set is Star Diving Show Splash. The program highlights Korean celebrities attempting to do impressive diving feats a la the Olympic diving stars. There’s a huge problem with this, however. Idols aren’t olympians.

They aren’t trained to do activities like this, and when they have schedules that involve little sleep and frequent travel, they’re hardly in condition to be completely safe to perform activities requiring this much effort.

Also, because filming athletic variety shows often takes so long, participants’ stamina can only decrease as time goes on, which only increases the likelihood of accidents. Complaints of Idol Star Athletics Championship taking 22 hours to film were shocking to media outlets and fans alike.

We implicitly accept the “overworked and overtired” premise when we see idols perform onstage because that is the job they’re actually trained to do.  These shows, however, carry more risk since they involve activities that typically aren’t commonplace for the idols’. Thus, the potential for injury is much, much higher. 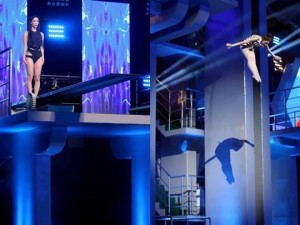 The filming of Idol Sports Championship consistently results in injuries among participants. This year, VIXX’s Leo, EXO’s Tao, and Infinite’s Sungyeol and Woohyun were injured during production.

For all of the supposed rewards of watching these shows (or just watching the fancams, as many fans do), is it really worth the time and expended effort? Over the years, idol participation has become largely filled by younger, newer groups – half because they need the exposure and half because they’re the most physically capable of doing these activities without harming themselves.

There is pressure for variety shows to stand out in the crowd, as programs showcasing idols are large in number and vast in style. However, finding the next Olympic sport to make idols try out casually for a few days or weeks for the sake of entertainment just isn’t necessary when they can be seriously injured.

Of course, there’s nothing wrong with making idols do light to semi-strenuous physical activity for television.  Plenty of talk-based variety shows often have some type of physical challenge, but they tend to not last for long periods of time nor require serious athletic ability.

With some modifications, the athletic variety show bunch could correct a lot of their flaws. By decreasing the risk – requiring shorter filming periods, fewer strenuous athletic events, and stronger safety considerations – these shows would likely result in fewer accidents. 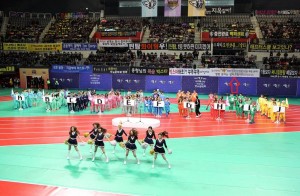 While making appearances on variety shows is an indirect requirement of being a K-pop idol, the tasks that they’re required to do should be more about helping them promote themselves, not about trying to impress viewers while also running the risk of being sidelined by injury. Whether they’re giving information about their personal lives or running a 100m race, there does come a point when they’re possibly being asked to do too much.

In fact, production on Star Diving Show Splash will actually be on hold after comedian Lee Bong-won and Clara sustained injuries during filming.

It’s a complicated issue as a fan of variety, since these shows do exist for entertainment and idols do have to “play by the rules” when they make appearances, but the rate of injury is just too common to ignore. Yet, with the string of new athletic shows as well as the continued existence of  ongoing competitive sports variety, the athletic craze doesn’t seem to be dying down.

To all of the variety-loving readers out there, is there a line on how much an idol should be expected to do on variety shows? Do you see issues with shows that are focused on athletic performance?