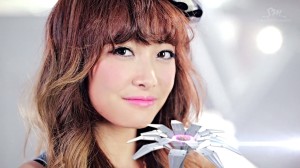 One year and one month since their last release with Electric Shock, f(x) are back with “Rum Pum Pum Pum (First Wisdom Tooth)” which is the lead track of their upcoming second full length album, Pink Tape.

It comes during what can be dubbed as the f(x) season in SM’s calendar seeing as f(x) usually promotes during the summer. Prior to the release of the actual MV, SM released a teaser which featured the members in some artsy fartsy set up, adding to the hype of the comeback. Could it be that after the visually boring “Electric Shock” MV, f(x) would come back with an MV that would think outside of the box?

So let’s get some things out of the way. Kai is not in the MV. There are no traces of the artsy fartsy teaser anywhere in this MV. In fact, this MV follows the typical SM MV formula: the girls dancing in colorful boxes, solo shots of them singing to the camera, some more dancing shots with a change in wardrobe, a new way of using the 360 degree matrix camera of theirs, some more dancing and then…..them smelling metal flowers? 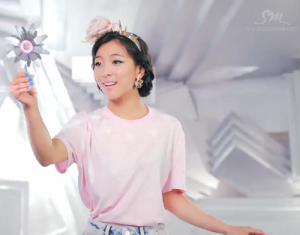 Nonetheless, the song has several interesting elements. One of the standouts in the song at first view of the MV is the round we have at the 0:40 to 0:56 mark. It’s hard to find a mainstream K-pop song that has two people singing the same melody and lyrics but beginning at different times in such a seamless manner such as what we have here. And then towards the end, we even get this mix of what sounds like snare drums and a plucky guitar. Speaking of that plucky guitar, we hear it throughout the song and is even played up in the choreography a little bit at the 1:14 to 1:17 mark.

Considering that this is f(x), the choreography was not just unimaginative, it was a disappointment. While there were some part that caught my eyes, the dance as a whole could have been better. The choreography as it is does not utilize what dance skills f(x) possesses. An example of such wasted opportunity was during the brief dance break at 2:05. By this point, the guitars and the snare drum was kicking in to produce a beautiful instrumental background and it called for an awesome dance break. What we get instead is a dance break that is unimaginative and lackluster. 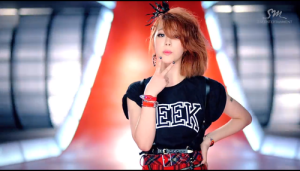 While it is known that f(x)’s fashion tends to be on the eccentric side of things, what they wore in the MV is boring. It is the usual f(x) style and clothes and while there is nothing wrong in that, it still seems as if the stylists were just throwing outfits on them. First, the tartan themed outfits have to go. While it does look good on Sulli and Krystal, the tartan seemed messy on Victoria and Luna. Secondly, why dress Amber in such hideous clothing? The first set of clothes we see was interesting and very f(x)…until we got to Amber and her orange get up.

Lyrics-wise, this has got to be one of the most imaginative songs that SM has released in recent years. It compares the feeling of first love to the first wisdom tooth that comes out, making this a very witty play on the usual symptoms of an emerging wisdom tooth.

“I will pierce through your heart’s walls and grow

It will hurt as if your head will shatter.

It’s a true shame that SM didn’t play the lyrics up for it could have instead seen a very interesting MV instead of the rather dry MV we got. While the song might make my heart go “Rum Pum Pum Pum”, the MV made me feel as if my “First Wisdom Tooth” was being extracted. A boring, disappointing MV for an otherwise instrumentally strong song, f(x) deserves better as this MV gets a 2.5/5.