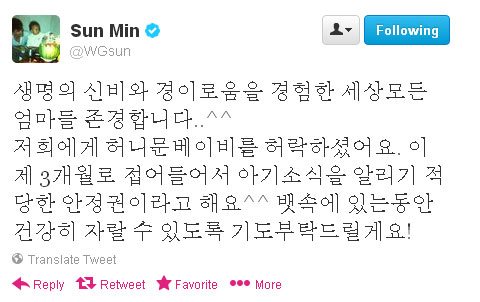 Wonder Girls leader Sunye continues to break down barriers — the first idol of her generation to tie the knot is now pregnant!

Sunye, now in Canada with her husband James Park, made the announcement via Twitter, saying that the couple had been “granted a honeymoon baby.” She further revealed that she was now three months pregnant, and asked fans to pray for her baby’s health.

Many were naturally surprised at the news, especially at how soon it happened. While some have resurrected shotgun-wedding rumours, it should be noted that in Korea traditionally follows the Lunar Calender with pregnancies; under this, pregnancies last for 10 months instead of the nine as deduced from the Gregorian Calender. So while Sunye has completed three months of her pregnancy in Lunar months, the Gregorian age of her baby is likely to be slightly less than that, probably two and a half months. 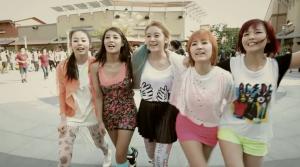 Another worry fans have had are about the Wonder Girls as a group — is this the end? JYP Co., though, has stated that Sunye is still very much part of the group. And with the other members involved with their own solo activities (Yeeun‘s starring in the The Three Musketeers musical, Yubin is appearing in OCN drama Virus, Lim is teaching English via her radio show Wonder K~Pop! on South Korea’s Education Broadcasting System (EBS) and Sohee is keeping Fannie busy with her many photoshoots), an extended hiatus wouldn’t be the worst thing in the world. And with 2PM coming back, JYP will still have one big-name group active.

Ultimately, it would be safe to say that everyone is happy for the expecting couple (especially best friend and uncle-to-be Jo Kwon). Congratulations to Sunye and James, and may they have a happy and safe pregnancy!