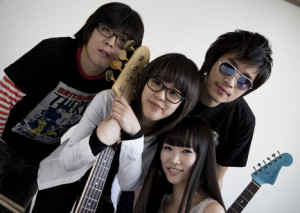 Donawhale made a full-album debut in 2007, and since then has released only one additional album, making that a total of two full-length albums. However, these two projects have been sufficient in solidifying the group’s image. The band began as a four-membered group with guitarist Yoon Sung-hoon, bassist Jung Da-young, pianist and vocalist Yoo Jin-young, and drummer Kim Min-joon, four years before they dropped their first self-titled album, Donawhale. In 2009, four became three as Kim Min-joon chose early retirement for personal reasons. The same year, the remaining three members released their second full-length album: Dive to Blue.

The group’s music is soft and its repertoire masterfully draws the viewer into this dream world full of haze and sounds that feel just right. A quick reread of the previous sentences makes the music sound like a good accompaniment to the recreational activities of some, but the music in actuality is much more than that. It seems to play in the background, unexpectedly grabbing attention when changes in melody are picked up. The group’s tunes come in layers, with Yoo Jin-young’s soft, husky voice, in addition to little touches here and there.

To start us off, here is “Close Your Eyes” from Donawhale. The building of instrumentals is wonderful to hear, and in particular, I enjoy the way the drums and bass are used to help maintain the atmosphere.

Also off of Donawhale is “Echo,” which also comes with a Jelly Boy Remix version, or a remix by Kim Dae-in of Apollo 18, as the last track of the album. The use of two tones in quick succession, in a pattern that starts around the two-and-a-half minute mark, hammers home the echo point by keeping that the focal sound right up until the end. And despite the repetition, the song stays interesting throughout.

My last choice from the group’s first album is “Rainy Night.” The track provides a consistent but unobtrusive rainfall background noise that is upstaged by the the piano playing in every way. There are no words to the melody, just sounds, and it’s simply beautiful.

First up off of Dive to Blue is the album’s first track, “Hello.” Like the previous track, there are no words. In comparison to the first album, there are more sounds incorporated here, newer ones outside of the piano/guitar/bass/drums arrangement; building on their signature arrangements, there are brass instrumentals that ease into the melody as subtle and refreshing add-ons. It’s also interesting to find that the normal drums have been neatly taken out of the picture.

Second is “A Glow Boy.” Again, the sets of quick repetitive notes seem to relate to the title, which almost seem to bring the quick flapping of a firefly alive. It’s a distinctly louder song that previous tracks with respect to the beat, but the vocalist’s soft voice still carries above all.

Last here is “Black Sheep” from Dive to Blue. It’s a bit on the longer side with the length approaching seven minutes, but it’s a pleasant journey punctuated by more typical rock sounds, and softened out by the vocals and the group’s style as a whole.

Though Donawhale has released only two albums, their sound really comes through in both of their albums and is a delightful one to hear. The manipulation of instruments creates effects that draw the listener into the songs, while making sure everything meshes together in a pleasing manner.

Have you listened to anything from Donawhale? Are you interested in hearing more? Leave a comment with your thoughts!