ZE:A Has a Song for All the Beautiful Ladies

ZE:A recently released a digital single, “Beautiful Lady,” with appropriate timing to accompany tvN‘s idol dating show, The Romantic & Idol. The group had a better year with songs like “Aftermath” and “Phoenix,” so they’re switching it up by releasing a softer ballad for their fans in thanks for their support.

Normally, music videos that are merely a compilation of scenes don’t merit a review. After all, they’re usually composed of performance scenes or backstage footage that doesn’t leave anything for analysis or meaning. But what’s cleverly done here is an incorporation of the supposedly real feelings brought about in The Romantic & Idol with the lyrics of song, making the footage fit the song’s meaning. ZE:A also had another, probably unfitting option for this song: Kwanghee and Secret‘s Sunhwa on MBC‘s We Got Married. But clearly, the chosen pair was the better choice for their romantic mood and sweeter interactions. 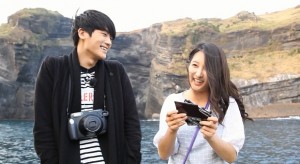 To add another layer of importance, for those of you that may not be keeping up with the show, ZE:A’s Hyungshik and 4minute‘s Jihyun–both starring in the music video and the show–are the show’s “fated couple.” To clarify, the show utilizes matching tastes to determine which couples go on dates. There have been three major, day-long dates based on choice of location for the first meeting, jewelry style, and taste in clothing, and one minor night stroll based on music taste. Of the four possible dates, Hyungshik and Jihyun have gone on the three major dates, showing matching styles. They even chose each other at the midpoint selection, being the only pair to do so. No other pair has also had such consistency in dates either.

As such, if there was any pair to star in a music video, it would be this one. Clearly it’s important that Hyungshik is part of ZE:A, but had the show not gone so well for him thus far–five of eight episodes have aired at the time of writing–the footage might not have been used for the single. The shots used are simple ones of holding hands, acting goofy, taking videos, just enjoying Jeju Island for the most part. The pair is mostly smiles with the occasional “candid” shot of one another, making sure to capture both of their good looks. 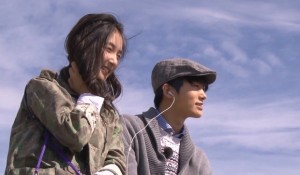 What makes this more than just a compilation of shots is the care taken to match some of the lyrics to the actions shown. Holding hands, looking at one another, and listening to music together, among other scenes, are shown in conjunction with the appropriate parts of the song, making it seem as if the show was filmed for the song or the song written for the scene. Either way, it’s a sweet touch that has you looking for more of those instances throughout the music video.

The interactions between the two don’t seem forced or unnatural. They aren’t exceptionally expressive either. Instead, they hold the air of two people that are comfortable with one another, which suits the lazy beat of the song and the picturesque setting. There isn’t the added pressure of acting to suit a song, though arguably, being on a supposedly genuine idol dating show has its sources of stress. The cinematography in the chosen scenes is variable and enjoyable to watch, especially as it takes advantage of the surroundings.

The song is also sweet and clean, using the group’s stronger vocalists to create good harmonies. All in all, Star Empire Entertainment took a clever route to get a music video out for this single. With no additional shooting required, a well-crafted music video was produced that related well to the song’s content and was sufficient to keep interest throughout.