The Black Ocean of My Seoul 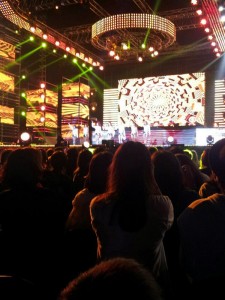 Black oceans are to K-pop what the mad woman in the attic is to classic literature; nobody knows quite what it is only that nobody wants to talk about it. Eventually the term sparks your interest and you do a quick Google, fit the pieces together and lose a little more faith in humanity. But why does something which seems to enjoy such universal condemnation remain a relevant force in modern K-pop?

For those who have yet to make this particular journey into the underbelly of their fandom, black oceans involve large groups of people switching off their light sticks in order to protest the performance of a certain group. The most common analogy presented is that of being suddenly ignored by your friends, mid-discussion. General consensus amongst fans is that black oceans are the cruelest and most immature act any fandom can perform, outstripping account hacking, stalking and even general harassment in the unpopularity stakes.

The black ocean as we know it today was born in September of 2008 in response to the supposed arrogance of then rookie group, SNSD. The three major fandoms of the day joined forces to create CARTEL (CA for DBSK’s Cassieopia, RT for SS501’s Triple S and EL for Super Junior’s ELF) with the intention of putting the nine ‘upstarts’ in their place. Believe it or not, there was even less love lost between the SM fandoms then than there is today with ELF and Cassies alike heaping censure upon both SNSD and their fanbase.

While ‘Gee’ has always formed the centrepiece of any retelling of SNSD’s rise to fame, it is important to recognise that the girls still enjoyed a relatively decent degree of success from early on. That SNSD had managed to accumulate masses of fans within a short time frame was not the sole concern of the CARTEL however; it was the behaviour of these fans, recently baptised as SONEs, that drew the ire of the all-powerful three. SONEs were thought to be rude, obnoxious and obsessive – behaviour made all the more intolerable by SNSD’s rookie status. So pervasive was this belief that rumors detailing the various crimes of these early SONEs continue to underpin the arguments of those criticising SNSD and their success. This persistence highlights a key aspect of the black ocean mentality: that the behaviour of those in any way connected with an idol can reflect negatively upon this same idol, regardless of their involvement in said behaviour. 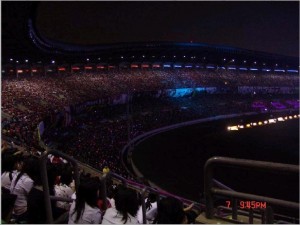 Which makes an odd sort of sense given that groups like SNSD sell more than their music; they sell lifestyle. Generally a profitable formula, except that when things go bad, you have to take the rap for that too. Which explains the tendency amongst fans to criticise T-ara rather than their CEO Kim Kwang-soo for the handling of Hwayoung’s departure. Regardless of their actual responsibility, T-ara are the face of their company; the one’s fans make emotional connections with and the ones fans feel let down by when things go wrong. This is equally true of casual fans, who are quick to criticise those they see as undermining the sacred illusions K-pop so willingly provides. So instead of picketing the agency headquarters (which a few dedicated fans chose to do) fans chose to take their complaint directly to supposed source of the problem: the girls of T-ara (who presumably had not suffered enough from the cancelled endorsements, deliberate exclusion from activities, closure of fancafes and accusations of bullying echoed by international peers).

T-ara’s black ocean raises another important issue because, even several months on, no one is sure it really happened. Black oceans are slippery things and – short of a public declaration of intent – are pretty difficult to pin down. It’s possible that the whole debacle was a misunderstanding blown out of proportion by a media fixated upon any and all T-ara related news. The sole recording of the event shows only A Pink fans, who wave towels rather than light sticks, making it difficult to distinguish from a black ocean. If you take this kind of evidence into account, the number of credible black ocean occurrences shrinks dramatically, with most proving to be little more than unfulfilled threats and baseless rumors. The speed with which the rumors spread is the significant thing, because it shows that people believe a group are in a situation that might give rise to a black ocean, whether or not they deserve it. 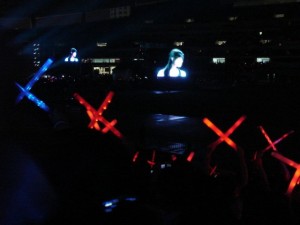 Perhaps the most fearful fandom in this regard is that of rookie group EXO. The parallels between SNSD’s  to success and that of SM’s latest venture are surprising to say the least. Despite having yet to be dignified with an official title, Exotics have already drawn the attention of other fandoms, and not in a good way. While most might argue that it takes some fairly extreme behaviour to alienate K-pop fans, much like SONEs, Exotics do not have much of a familial foot to stand on as EXO pose a fairly obvious threat to one of the best established fanbases in K-pop. That EXO debuted with twelve members has not been lost on the number sensitive ranks of Super Junior’s Everlasting Friends. Indeed rumor has it that ELFs were planning a black ocean to protest the inclusion of EXO as an opening act for Super Show 4. Thankfully this never eventuated and EXO’s appearances have remained protest free. But why protest a group who have done so little to deserve personal criticism? Ironically, it is precisely this lack of activity that has given rise to many of EXO’s problems.

Whatever their merits, many people consider EXO’s popularity to be unearned; a result of their aggressively hyped debut and the backing of industry heavyweight SM Entertainment. That their activities have been lacklustre compared to the ruthless promotions of fellow rookies such as B.A.P and even NU’EST only adds insult to injury. And it is here perhaps that the insidiousness of the black ocean mentality becomes apparent: if you believe that public demonstrations of support encourage a group and show support for their actions, then why shouldn’t public demonstrations of disapproval be used to achieve the opposite effect? It’s a difficult case to argue without making sweeping statements about common human decency (and coming off as a delusional fan in the process) but one that netizens the world over have made time and time again – to their credit. Black oceans are widely acknowledged as needlessly cruel, placing a group in an inescapably humiliating situation and giving no benefit of the doubt. Why then do so many participate? After all, a black ocean requires fairly widespread complicity in order to function.

I think it likely that many moderate fans in attendance during a black ocean are simply swept up in the mob psychology of the thing. After all, if you’re not a huge fan of a group why risk drawing the ire of thousands of fans supposedly united in righteous anger? All a black ocean – or indeed any form of systematic protest – requires is that a small group of extremists organise and pressure the majority into cooperating with their (i 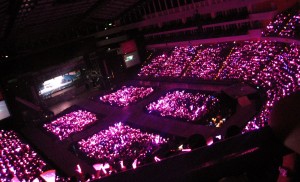 n K-pop’s case, very simple) demands. Not to mention that most idol group related scandals have a wide readership amongst fans of idol groups (surprise surprise) so even casual listeners are often familiar with the basics of an argument for or against a black ocean. Conversely, this sense of victimisation can have a galvanising effect on a fandom; SNSD have not emerged the weaker for their early criticisms and I don’t think EXO will either.

Like it or not, as long as K-pop continues to generate such emotionally charged fandoms (and light sticks remain a constant at live performances) black oceans will continue holding groups accountable to their public, whether they deserve it or not.