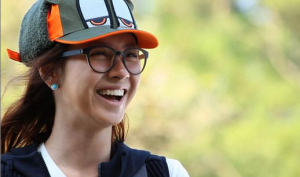 No, I’m being serious here!

When it comes to variety shows, the inclusion of guests can bring up some mixed reactions from viewers. As I’ve spoken about before, regular variety viewers would much rather focus on the main cast of a show who embody the main charms of the show they’re watching rather than shift the focus to a guest who may or may not be able to deliver amusing dialogue and spontaneous antics. It’s risky business, and while it’s almost unsettling how much controversy they get, female guests, namely female idols or actresses, are met with the most apprehension when it comes to variety appearances.

A variety of people commented about how they really don’t mind guests on variety shoes as long as they’re able to amuse, with many individuals categorizing specifically female idols as the type that can’t. Male actors, male idols, and fellow gagmen? They’re okay. Chances are that they’re able to bring it for the show. But female idols and actresses? Nope, it’s expected at this point that their appearances are going to be bland and boring. 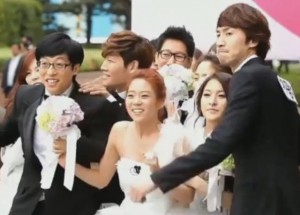 This generalization, as unfortunate it may be, sadly isn’t necessarily baseless. Female idols and actresses as a whole haven’t really made the best reputation when it comes to variety, so I can understand where these individuals are coming from. I’m also not the biggest fan of those date games they play in Running Man when a group of female idols are invited. The challenges are often too tedious and unchallenging, and the interaction seems a bit contrived and too focused on the beauty and charms said female idols rather than amusing gags or dialogue. Furthermore, I too notice how games are usually downplayed and gags are less harsh whenever a prominent female guest is involved, causing the quality of the show to plunge somewhat. And the polite and sweet disposition many female idols play up in shows, as charming as it may be to fans, just isn’t suited for variety. It gives the impression that said idols aren’t trying their best in the show for them to retain such a disposition when they’re supposed to be getting down and dirty. But to generalize all female guests as unamusing or too image-focused; isn’t that a bit unfair?

In their defense, there are reasons why female idols and actresses behave the way they do. For one, idols of both genders have to meet such impossible standards to imitate perfection, lest they be met with endless controversy once signs of imperfection shows. As such, it’s much safer for idols to pull up an act of attentiveness and pleasantness than to risk controversy for being too outgoing or loud that they can be perceived as rude.

A good example of this in recent times is Eunji from A Pink who recently attracted a fair amount of controversy for her supposed rudeness on Challenge 1000 Songs. Eunji was criticized for overly fighting for the mikes of her fellow contestants during the competition, and considering Korea’s emphasis on etiquette, her actions really could have been perceived as rude and uncalled for, especially for an idol who’s supposedly believed to be perfect. But call me out if I’m being biased here guys, but Eunji’s antics looked more like a variety gag to me more than anything else, done just to ignite humor in a show meant to do the same. But seeing how much controversy — controversy faced by not only Eunji but countless others before her — one could gain from being overly active or outgoing in a variety would be more than a suitable warning for idols to watch their behavior and restrain themselves in variety.

Furthermore, as unfortunate the implications are, female idols in particular get away with less compared to their male counterparts. While a good number of male idols have received their fair share of controversy, 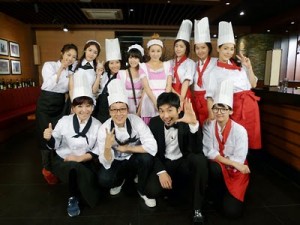 females in particular seem to get more ire from the public for more minor acts, thus keeping many from “acting out,” whether it be arguing between members, exploding in anger, or having prominent diva moments. Part of this comes from how Korea paints their perfect females as delicate, submissive, and feminine. Females are expected to follow males in relationships, and their dependency is almost prized. So even if a female idol or actress is capable of doing more physically, some would refrain from doing so for the sake of their image. I’ve definitely seen the likes of Hyuna and Hara act more delicate in certain shows compared to their behavior in others, most likely to keep their image as perfect idols intact.

For all these reasons, it makes the females who defy the norm all the more laudable. Generalizing all female idols and actresses as boring and unamusing is kind of wrong, since there are those females who can genuinely entertain. These females usually aren’t afraid of quarreling with their male counterparts, or at least they are able to sacrifice their perfect image for the sake of amusement, which really should be the first rule of variety. And so here is my list of some of the most stellar females in variety. 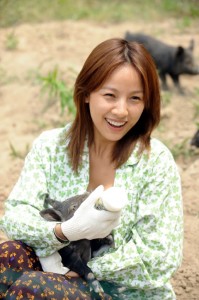 For starters, there is the beautiful Lee Hyori, who was able to charm the public with her down-to-earth wit and her almost domineering ferocity during her run in Family Outing. Despite being known as the Nation’s Fairy, Hyori was able to match up with her male counterparts, and while certain games were made slightly easier for her, she wasn’t afraid to play dirty with the guys, oftentimes even resorting to cheating to achieve victory. There were often shots of her in unflattering angles, and while she did occasionally complain, Hyori took everything well, being a good sport when the family men teased her.

Likewise, there is also Running Man‘s Song Ji-Hyo. Like the former Fin.K.L. member, Ji-hyo’s relationship with the men of the show is very comfortable, to the point where the girl is considered one of the boys. Despite being the only girl on the team, she is considered one of the best players, being the only one who can rival Commander Kim Jong-kook and MC Yoo Jae-suk. She is often teased for her unkempt appearance and her aggressive behavior, but it’s honestly all part of her endearing charm. Sure, being the only female, she was involved with a variety of love lines with the many men of the show, most notably the adorable Monday Couple with fellow member Gary, but those love lines didn’t weaken her one bit.

But a girl doesn’t need to be a tomboy or overly domineering to be successful in variety, as shown Family Outing‘s Park Ye-jin. Ye-jin remained very feminine and delicate throughout the majority of Family Outing, but she also wasn’t afraid of getting competitive, oftentimes joining Hyori in trying to torment the men. Her killer knife skills and her fearlessness when it came to animals definitely brought some great laughs of the show. 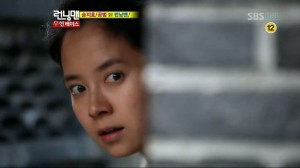 Along with the previously mentioned Lee Hyori and Song Ji-hyo as well as the glorious Warrior Princess Yoon Eun-hye — who’s long due for her Running Man appearance by the way, the four are known to be the only ones able to diminish Kim Jong-kook, an amazing feat not many can do. I also like adding Perfect Housewife Kim Won-hee to the mix, as while she doesn’t frequent variety as much anymore, she has wit that rivals many of her more energetic juniors, and she too doesn’t mind sacrificing her image for the sake of entertainment.

When talking about female idols and variety, the original all-female cast of Invincible Youth just has to be mentioned. While the seven girls started out a bit awkward, once barriers started breaking, the show was able to fully shine, in my opinion, even rivaling the other male-dominated variety shows airing at the time. Eventually, the girls even stopped wearing makeup to shoot, shedding away more and more of their idol images, and showing more of their true selves, a part of them that made the show shine. The show taught them well, as the girls involved are now some of the better female idols in variety. 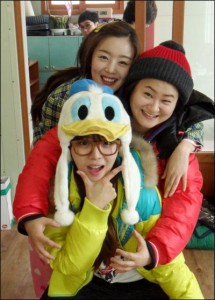 From Adult-dol Narsha to the hilarious Subyung loveline, the show made me fall in love with all of the girls involved, much preferring their silly selves they showed on the show over their perfect images they show while performing. I only wish the originally potential-filled Invincible Youth 2 met up with the expectations of the original, since its cast and the premise had so much promise.

And sure, the show’s chemistry wasn’t as golden as the original Invincible Youth, but Heroes also deserves mention for risking it with an all-female cast. While some members were clearly favored over others, the twelve women were able to amuse through a fairly solid variety show. From the naturally adorable know-it-all IU to the fiery and snappish Seo In-young, there was a variety of different personalities on the show that made it work.

And while Running Man is most often blamed for utilizing female guests in boring episodes, there were some genuinely amusing female guests on the show. Ignoring the fact that previously mentioned Song Ji-hyo originally only started as a guest but later became upgraded to an official cast member, the likes of Kim Sun-ah, Lee Da-Hae, and Ha Ji-won were able to bring great laughs to the show also, proving that with a proper game and premise, a female guest can be utilized in a challenge just as challenging as a male guest.

And lastly, this list is incomplete without the mention of the hysterical female gagmen of K-variety, of which include Jung Ju-ri, Kim Shin-young, and Shin Bong-sun. While their humor is very self-degrading at times, these women are oftentimes crucial in breaking the ice in a variety show, doing just as good of a job as their male counterparts.

In conclusion, these women break the generalization of females being inferior to males in variety. They have the courage to sacrifice their images for the sake of entertainment even if they’ll be met with controversy. So Seoulmates, what do you think of girls in variety? Are the girls mentioned above able to truly rival their more accepted male counterparts? And remember, this is just my personal list, but there are so many more females with amazing timing, great wit, and courage to be a little out there in the world of K-variety. Were there any females that I missed on the list that deserve mention? Acknowledge them below!