With idol groups dominating airwaves, sometimes soloists get forgotten in the process. This week, the focus is on Core Contents Media’s soloist, Yangpa.

Contrary to popular belief, Yangpa has actually been singing for at least a decade, first making her debut in 1997, and peaking with this effort in 1999, before going on hiatus in late 2001.

She then made a comeback in 2007, winning a Golden Disk Award for her album The Windows Of My Soul, before going on yet another hiatus. Below is the promoted track “What Is Love” from the album.
Fortunately, after signing on to Core Contents Media (CCM) in 2011, fans did not have to wait too long for her next release, with CCM releasing a single and album within a few months. And after a year’s wait, another EP from her has arrived.

For all of CCM’s many faults with management (especially with T-ara), they do have a good record with ballad singers and groups. After all, they can count among their successes SG Wannabe and Davichi, so it’s worth seeing how they fare with something within their specialty.

1. “I Know” (Featuring Lee Boram of Seeya and Soyeon of T-Ara)

This song really sticks to the CCM formula of ballads and all the better for it. Instruments that make themselves heard but never overwhelm, a gently persuasive melody, paired with fine vocals that sync nicely with the vocals. In fact, my only criticism would be how well meshed the three vocals were, it was near as impossible to tell who was singing at what point. For those wondering, the slightly lower vocal positioned nearer the right is Soyeon’s, while the breathier vocal nearer the left is Lee Boram, leaving Yangpa to occupy the centre of the soundstage. The live version replicates the studio placing, so it also serves as a good frame of reference.

What really seals the deal for the song though, is the MV, which does a very nice job of complementing the song and its subject matter, the love which one was forced to let go of. The MV does nicely set the story around a live radio broadcast and features a DJ reading a song request and reminiscing a lost love. The acting in the video was reasonably done, with T-ara’s Eunjung doing an adequate job with the emotions, and crucially, the crying scenes. Girl can certainly cry on cue.
There is also an alternate version featuring actress Oh Hye In. The nature of the story is the same, except that Oh is listening to the DJ, and realises she is the subject of the song dedication.

2. Love is All The Same (Feat. Lee Haeri of Davichi and Hanna)

My first impression of this song was that it was probably “We Were In Love” redux, right down to the rap in the middle of the song, and Lee Haeri’s powerful vocals filling out half the chorus. The only difference was switching out the more neutral sounds of T-ara, with the clearer and cleaner, more ballad-oriented voice of Yangpa.

However, that might not be bad thing. While it’s doubtless that CCM is playing right down to a formula, it is a formula that has worked very well for them, and one which most enjoy. Also, there is evidence that T-ara’s Hwayoung might have a purpose in the group: She wrote some fairly serviceable lyrics for the song’s rap.

Props also to creating a simple video that does stick with the theme of love lost and missed. It was also good to see actors playing out roles, leaving viewers to just appreciate and figure out the plot.

3. Parting is All The Same (Feat. Shin JongKook of SPEED)

This is exactly the same song as the above, save for switching out the Lee Haeri for a pleasantly smooth and inoffensive male voice, as well as replacing some of the instrumentals for slightly more gentler, laid-back ones. It makes for a nice listen, but the main question is, why? The themes are exactly the same, the singing is neither better nor worse, and even the video just tells the same story, only from the male perspective.

It would have been better album-wise, if the resources used on this song were diverted to writing another track which could have better told the story from the guy’s perspective, as well as adding to the album’s musical vision. But then again, CCM could not have spent a lot on adapting the song slightly, so it probably was not something to be promoted heavily.

Reminiscent of early 2000s power pop, this song serves as a nice break away from the ballads that have dominated the EP. As far as a song goes, it was pleasant, inoffensive, quite radio-friendly, and slightly forgettable. 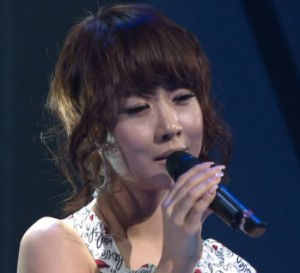 However one thing of note was how this song featured Star King guest, turned CCM trainee Shannon Williams. While her appearance in the song was limited to the chorus, her singing at this stage did show a fair amount of potential, sounding rich and smooth. If CCM’s intention with this song was also to hint at the potential of their trainees, then this was successful to some extent, without taking away from the main singer.

For an album billed as a mini-comeback, it seems interesting that the only song featuring only Yangpa, would be the last song, and one that seems least like the other tracks sound-wise.

An upbeat-track laden with synths and a clean drum and guitar sound for the chorus, this song is a complete turn-around from the emotional ballads. Theme wise, the lyrics also match the tune, giving the song a pretty uplifting feel of wanting to be loved.

Its inclusion is slightly questionable, in how it seems to jar with the downbeat tone of the album slightly. However, it could also be viewed as a nice way to round off the album, and also as a way too add a dash of optimism to the album’s theme. My thoughts lay more towards the latter though. 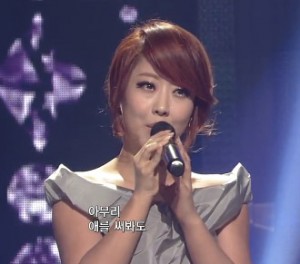 The singing on the album was a strong point, as it was of a generally high quality and everyone on the album could sing. The guest voices on the album were generally were well chosen, and never threatened to overwhelm the main attraction, who was Yangpa.

Where the album stumbled slightly was in how predictable the whole thing was. It was as if CCM just decided to go with the cleanest, most sales-friendly format for her, featuring the most recent trends in ballad.

So overall, the whole EP ended up being a nice, pleasant, inoffensive and slightly bland listen, which was a shame considering Yangpa’s fine vocals and how she had better songs in the past, which showcased her ability to capture the lyrical nuances.

Ballad loyalists would however be well served though, and there is something comforting about the predictable style, like flipping through a favourite novel again, so this album gets a 4.0 out of 5 from me, largely on the strength of the singing.

Recommended tracks: I Know, Love is All The Same, Wonderful Girl (Individually)
(The other two tracks though, were still adequate listens, and fit the album nicely.)