Of Bromance and Homoeroticism

From my observations, “bromance” is a growing and favored concept in KPOP-verse among male idols. Don’t try to deny it (and my Tumblr feed is excellent proof): there are countless shipping biases, especially between group members or individuals of the same entertainment label. These biases are both intentionally and unintentionally reiterated in photoshoots, at concerts, on television, and across forums and websites where fangirls and fanboys alike will create monikers and will dedicate fanfiction or extensive commentary on their favorite ‘couple’. Prime examples are Super Junior, 2PM, U-Kiss, Big Bang, DBSK/JYJ – the list is endless, really.

However, the concept of “bromance” lies on a very precarious line between affection and homoeroticism –veer too far towards the latter, and netizens will attack. I’m sure that everyone understands the urban definition of “bromance”. Coined by Brody Jenner‘s MTV showBromance, the term describes an intense and complicated friendship shared between heterosexual males. Basically, a form of male bonding with the constant reverberation of “no homo”. On first evaluation, “bromance” seems to re-examine homosexuality and presents a new societal shift, in the sense that it does not delineate relationships into definite stereotypes – gay, straight, bisexual, asexual – and allows a group of men to openly express their emotions towards one another without the fear of being labeled as gay.

But that’s where the problem lies. If it’s a friendship, then just call it a friendship. Why create a new label to an accurate word and heighten what is not supposedly there (i.e. homoeroticism)?

There is a double standard going on here that is becoming more evident, especially in the case of KPOP bromance and most netizens. While it appears that more people are tolerant of something decidedly “homo”, that is not the actual case. Rather, fans ship the fictionality of a situation that excludes their male idols from a real relationship – and thus within possible reach – into a fandom that allows for these idols to be playful and intimate without affecting their bachelor status. That is, a “bromance” but not an actual, romantic relationship. The possibility of homosexuality does not even register to fans, that perhaps there is more than just warm fondness between two males. I am not suggesting that there anyone is homosexual, but that’s what I call a rejection of homosexuality, the continual assertion that what is shared between two males is strictly a heterosexual friendship and nothing more. 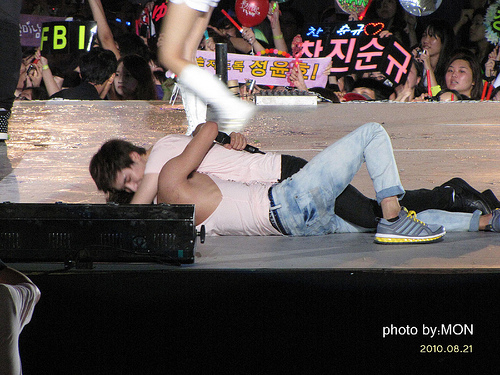 And it’s very apparent in the way many South Koreans react to homosexuality, to their intense wariness and questioning of any forms of too-obvious homosexuality. So netizens don’t mind writing or gushing over any bromance between group members that they’ve created in their imagination but they will take offense to any address of homoeroticism? Take for instance the maligned gossip about 2AM’s Jo Kwon and his close friendship with U-Kiss member Soohyun, in which Jo Kwon was forced to publicly deny the gay rumor to pacify netizens. Another is when  two Superstar K2 contestants, Jon Park and Heo Gak, were defamed as gay due to their overly expressive man-hugging on the reality show. But the clearest example is when Filipino DJ Mo Twister mentioned of the homosexuality depicted in a U-Kiss photoshoot, stating that they looked like lesbians. The result was an outpouring of irate messages, from both fangirls and U-Kiss member Alex’s father, sent to his Twitter account demanding for his public apology. Surprisingly enough, DJ Mo Twister never apologized and a certain paragraph from his public message caught my attention:

“Look at their photo and be realistic, I am not off on my assessment–those dudes dress and look like chicks. If you find that offensive, why? Actually, your visceral reaction to my comment may even be interpreted as homophobic. So many people have messaged me saying that Korea doesn’t have an established gay culture so saying a male looks like a female is unbelievably offensive. My reply: “I don’t give a f*ck”. That is your problem. If you think being called feminine is an insult, you have other issues you need to deal with.”

While he may not have worded his commentary appropriately, I do concur with his point. It’s as if many fans can’t seem to realize a certain hypocrisy, that they may be intrigued by homosexuality between men just as much as two males in a “bromance” may possibly be as well. Funny how the “romance” in bromance – the homoeroticism, the suggested homosexuality – is equally implicit, silenced, and ignored.