If you are looking for a show that is chock full of drama and has twists at every turn, Green Mothers’ Club is the show for you. While having so much drama can often seem like it is only for shock value, this show always manages to tie every arc back into the central theme.

This K-drama is about a group of mothers who based their worth within their community on their own child’s academic success. Our protagonist, Lee Eun-pyo (Lee Yo-won) has recently moved to this new neighborhood where she quickly finds that she is at the bottom of the pyramid. As she struggles to fit in, the other mothers resort to shady and manipulative methods to drive her out of the group. While on the outside, the mothers may seem pristine, they hide dark secrets about themselves as well as about their family. Green Mothers’ Club is a K-drama critiquing the toxic and overly competitive nature in the pursuit of academic success.

Although Eun-pyo has an impressive education herself, she decided she did not want her own children to experience the insecurity she felt during her academic career. As such, she has taken a more hands-off approach to their education, allowing the teachers to do their jobs. However, that does not sit well with her new neighbors. When it comes to education in this neighborhood, studying until midnight, cram schools, and learning second languages are all a must. As she is thrust into this toxic environment, she struggles with wanting to allow her kids to enjoy their childhood and wanting to fit in with the other mothers.

As the episodes progress, we see more and more how the strict parenting by the other mothers has affected their children’s psyche. At first, we see the students as happy and eager to learn. However, Yu-bin’s (Joo Ye-rim) character begins to feel more and more insecure in her position in the school. Eventually, she creates a plan to frame Dong-seok (Jung Si-yul), Eun-pyo’s son, for sexual assault because she is so jealous of his success that has overshadowed her own. It is clear she has a constant need to be at the top regardless of how she gets there due to her mother’s pressure on her.

The K-drama also takes the time to show flashes of Eun-pyo’s life to round out her character and explain her more casual attitude toward her children’s education. In her past, Eun-pyo was constantly jealous of her former classmate, Seo Jin-ha (Kim Gyu-ri). Eun-pyo even goes as far as to destroy her own painting because she, herself, deems it not as good as Jin-ha’s. On top of her academic jealousy, Eun-pyo is constantly reminiscing about her former lover, Luis Benuel (Roy) who is now Jin-ha’s husband. As a protagonist, she is a flawed character but it is clear she is always trying to learn and adapt.

As such, Eun-pyo has regrets from her past and does not want to have her children feel that type of insecurity. Instead of pressuring Dong-seok to study, she encouraged his own independence when it came to his education and activities which offered him the chance to find his own talent in architecture. This revelation seems to prove that her more casual upbringing of her children did not delay her son’s education but instead helped him focus on his own enjoyment and talents.

Even as Eun-pyo seems to be winning with Dong-seok’s education and finally fitting in with the other mothers, the universe decides to throw her a curveball. Eun-Ppo made great efforts to befriend Byeon Chun-hui (Choo Ja-hyun),  the star mom and top “mean girl” among the other mothers. Chun-hui spreads false rumors about Eun-pyo to distract everyone from their own dark secrets and to cover up for her daughter’s own wrongdoing. Having an immaculate image is more important to Chun-hui than the truth. With every episode, it is hard to understand why Eun-pyo does not leave this toxic neighborhood, but it seems she does not want to go down without a fight.

While there are many dramas about school life, Green Mothers’ Club takes it from a different perspective. This K-drama shows that the mothers in the show see their children as tools to climb up their own self-imposed hierarchy. Eun-pyo’s character throws a wrench into that system even as she is trying to assimilate. There is still more to see whether Eun-pyo will make a change for the better in the community or whether the neighborhood will eventually wear her down. 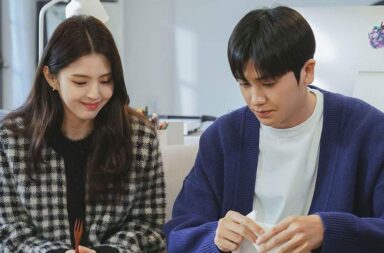