February was full of so many great comebacks that we did not get the chance to review them all.  The K-pop world always seems like it is the battle of the groups, so it can be hard for soloists to breakthrough. While some of these soloists started off in groups, they are still able to shine bright on their own.

Some of these MVs are on the simple side, but there is no denying the beauty in that simplicity. On the other end, acts like Jamie and Billlie decided to go all out with their MV concepts. Whatever the choice, what matters is that the MV fits with the theme of the song. Here are a few of the acts we missed last month but still deserved a shout-out.

Jamie takes the term “pity party” with a literal interpretation in her latest MV. While most of the video shows Jamie partying it up, surprisingly, the video has a gothic aesthetic with the use of black and dark lighting. However, despite the moody setting,  the MV also does typical party scenes with money, alcohol, and dancing. The MV takes an even darker turn when Jamie’s persona, seemingly drugs a man and has him sign what looks like is a contract. However, even after the signature is received the rest of the MV is still plenty of partying and dancing.

Even with the contrasting concept, the MV’s concepts fit with the song’s theme. The voice of the song acknowledges that they have toxic traits while also indicating they are having a bit of breakdown. Simultaneously, the voice of the song is bragging about her riches and confidence despite those flaws. The topic of the song also goes to show Jamie is not afraid to represent a less than an angelic idol already helping to highlight her as an artist.

Similar to Jamie, Mark is about feeling sorry for himself but in a less enthusiastic fashion. The MV uses cool and neutral colors to create a melancholy tone throughout the MV. The backgrounds are rough with dirty mirrors, messy rooms, and abandoned factory lots. At first, you get the feeling that Mark is apologetic, but eventually, the MV takes a turn as the lyrics escalate. He reminds the audience that he is still young but he will not give in to people’s perception of him.

In some of the actions scenes, Mark is chased by masked people, and another one shows trash being thrown down at him. These additional scenes add to the story that Mark’s persona is feeling constantly attacked as he struggles with his own identity as an idol. However, he reiterates that he will be resistant to people’s opinions despite how hard it may be. The MV is subtle with its concept and it nicely progresses with the emotion and sentiment of the lyrics of the song. It is always daring for idols to admit they are not perfect and remind their fans that they are still young themselves.

Ha Sungwoon – “Can’t Live Without You”

At first, the MV appears to have a sad tone with muted colors, and Ha Sungwoon’s persona appears by himself. In the beginning, he is driving alone and going on a walk alone. However, the MV is cleverly set up to have the viewer as his companion. As he is driving and as he’s walking, Ha Sungwoon lovingly turns to the side as if looking at a lover. We see it more obvious when he smiles and goes to open the car door for someone. The viewer even gets to enjoy a lovely candlelit lunch with rose petals and a cake.

The lyrics fit perfectly with the romantic tone as Ha Sungwoon tells the viewer, “I can’t live without you.” Overall, it is a simple MV with a simple MV in terms of scenes and colors, but with a smart twist to involve his fans.

While this may not be everyone’s cup of tea, there is no denying that Billlie’s MV is entertaining at every turn. Like the title of the song implies, Billlie are in a strange world of horror with a mix of “Alice in Wonderland.” The scenes are depicted with common horror tropes like empty hallways, desolate swing sets, and creepy televisions. However, there were unexpected bursts of colors injected into the scenes along with more whimsical elements. Neon lights, flashy outfits, and a giant cyclops rabbit… it really is a strange world.

The song is a splash of fun, with a decent chorus. The members bring a lot of life to the song, and the MV takes a horror concept in a new direction. For some, it may be too much, but it definitely helps Billlie stand out.

This MV plays like a Korean Drama with Solji’s persona bumping into her first love. After the awkward interaction, the MV goes with flashbacks of their previous relationship. The scenes show them as they go on dates, romantic glances between the two, and other cute interactions. These sweet memories are contrasted with Solji’s sad expressions as an adult. The ending is left open-ended with her facing her previous partner in a cafe. However, while her ex is smiling she still has a distraught expression suggesting she is still pained by the memories.

Overall, the MV’s story is nicely displayed showing the viewer how in love her persona was in the past. Having the adult version of the persona reminisce about the past after bumping into her ex is a great way to show that she still has longing feelings for the relationship. This one is another simple MV but it gets the message as well as the emotion across to the audience.

Those were some of our favorites, but let us know in the comments if there were any other MVs we missed for February! 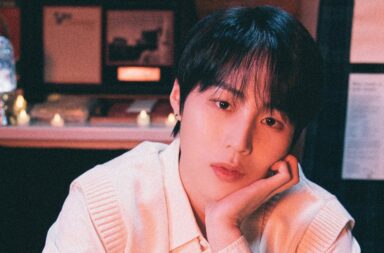