Onewe Shoot for the Stars in "Planet Nine: Voyager"

In June 2021, the RBW Entertainment band Onewe set off on a journey to a cosmos of their own in Planet Nine: Alter Ego. A little over six months later, the five members continue this exploration—both one of a fictitious nature and one diving into their artist identity—in Planet Nine: Voyager, their second mini album. Now on ‘Planet Nine’, Onewe have arrived at a place for them to just be and create.

While “Voyager” may spark images of grand expeditions, whether of the sea, the land, or the sky, this title may remind others of the NASA space mission. The Voyager are twin spacecrafts that were launched in 1977, and their current mission is to explore interstellar space. On the Voyager also lies the Golden Record, a phonograph record that carries sounds and music from Earth. A time capsule of sorts.

This connection between NASA’s Voyager and Onewe’s Voyager is only strengthened through the inclusion of a time capsule (in the shape of a rocket ship) in the MV for “Universe_”, the album’s title track. In a way, Planet Nine: Voyager is a time capsule of Onewe and their music at this specific point in their careers.

It is a poignant image to attach to Voyager, which provides a holistic view of who Onewe are at the beginning of 2022. The five members are featured as songwriters and producers, which automatically sets this work apart from the rest of their discography. Voyager allows listeners to travel through the minds, emotions, and stories of Onewe, each track revealing another layer in their artistry.

The band’s second mini album opens with the piano notes of the title track “Universe_”, a soaring yet soft rock song. Onewe shift from the energetic electric guitar hook of “Rain To Be” to one that gently washes over listeners, increasing in emotional tenor as the track progresses.

The MV for “Universe_” weaves the beauty and simplicity of the song through a narrative, something that Onewe have not included in their MVs until now. It is a journey of its own to witness more being invested in Onewe over time, most notably through their MV concepts and production.

The five members exercise their acting skills in “Universe_.” Each one is paired up with someone their characters love, and viewers follow them through the small, but meaningful, times in their lives. For example, Harin celebrates his grandmother’s birthday, while Kanghyun spends time with a school friend, and CyA cooks a meal with his mother. Dongmyeong is all smiles and laughter when he plays with his dog, and Yonghoon serenades his girlfriend, armed with just an acoustic guitar and his voice.

Written and composed by Yonghoon, the track’s smooth harmonies and flawless falsettos (among other things) comfort through their simple expression of emotion, a simultaneous existence of softness and strength. This is seen in its moving lyrics:

The one that lit up

The one that stayed by my side

The one that held me tight

When my head was down

These words, especially when combined with the MV’s narrative, demonstrate why “Universe_” was chosen as the best song to represent Planet Nine: Voyager. There is a macro and micro approach to the concept of ‘universe’. Onewe may be exploring who they are as artists—a far-flung universe of its own—but the five also contemplate the smaller universes you make with the people you love. They recognize the support received from their loved ones and reciprocate the same care when they gently ask “Can I wrap you in my arms when your head is down?”.

The cosmic theme woven throughout Onewe’s discography and the topic of Voyager’s title track continues in “Envision_” and “Orbit”. It is incredible how this band have adopted the stars and the universe into their group identity, yet the music they create around the topic always feels new. “Envision_”, which was written by drummer Harin, is an example of this. Waves of piano notes, gentle bells in the background, and an acoustic guitar introduces listeners to Voyager’s second song. From the get-go, “Envision_” builds anticipation and captures a movie-like soundtrack quality in its instrumentals.

This impression is not too far-flung, as Onewe tell the story of a child trapped in a well (the Korean title translates to “A Child in a Well”). After the atmospheric intro, the rhythm changes as Yonghoon starts singing, noting that the story (from the child’s perspective) has officially begun. When the chorus arrives, listeners are there with the child looking up at the bright night sky:

‘Star,’ I say to the changing sky like a whisper

Isn’t there a world you dream of?

When you grow bigger, little by little

You will be able to find out, little boy in the well

The instrumentals never compete with the complexity of the sad yet hopeful story; instead they complement and provide another layer that deepens the narrative. Sometimes the production reflects the words, like the bridge, “I’ll hand you the path to the stars”. Meanwhile, CyA on the bass creates a musical path of his own with a (delicious) descending baseline. By the end of “Envision_”, listeners have truly undergone an experience of impeccable storytelling and production.

Kanghyun’s track, “Orbit_” falls towards the end of the album, but it does not fall behind its more hook-filled and louder neighbors, such as “Trigger_.” Again an acoustic guitar announces the beginning of another track, this time with peaceful strumming that listeners have to strain to hear at first before its volume grows. Lyrically, “Orbit_” can be connected with “Universe_”: “Just like the stars that you see will be there tomorrow too, Whenever I look over at you, you’re always there.” Onewe take the idea of orbit and translate it into an image of love.

CyA plays a bigger role as the rapper of Onewe in this track, creating different vocal textures as his lines contrast with the chorus’ flowing notes. The main rap section has a heavier autotuned echo, as if this echo is one of the characters in “Orbit_”. The moment of call-and-response also leans into the orbiting theme. Just as the way a star orbits a planet is not visible to the human eye, the connection between CyA’s voice and his echo is heard but not seen. The ending of “Orbit_” follows a similar path, as it seems to be intentionally left open and incomplete, despite the anticipation for one last line.

The remaining three tracks carve a more experimental path, both instrumentally and lyrically. “Montage_”, created by CyA, is the shortened English name of its long-winded—yet intriguing—Korean title: “Hope you, the one I’ve lost in a dream, can flow in a shallow sleep”. Expecting the astonishment about the length of this name, the youngest member took pity and also announced the abbreviated title during Onewe’s highlight medley, “Hope-dream-sleep”.

Throwing its hat in the ring of the pop-punk and rock-driven revival in K-pop (i.e. Seventeen’s “2 Minus 1” and TXT’s smash hit, “0X1=Lovesong [I Know I Love You]”), “Montage_” brings heavy-handed drums and a guitar hook full of reverb to the forefront. As the third track in Voyager, CyA’s song is the most upbeat out of the six, forming the auditory peak of the album.

The lyrics also take inspiration from the internal rather than external, such as Yonghoon and Harin’s focus on the stars. “Montage_”, rather, paints a picture of fleeting dreams and people you can only interact with outside of physical reality (“Even in my dreams, I missed you”). The outro, in particular, is memorable. Kanghyun’s guitar solo pushes “Montage_” to its last section, the full force of Harin on drums behind him. The drummer cranks it up one more notch as he leads the rest of Onewe to the conclusion of the track, capturing a very anime-feel in the rhythm and the artistic impact felt by the downbeats.

Donymeong’s self-composed track follows this explosive outro. “Trigger_”, however, stands firmly against the force of “Montage_” with its simple electric guitar beginning, the three notes echoing in a space of stillness. Tension and mystery are masterfully built as the song climbs to the chorus, in part because of the lively conviction that underscores each piece of “Trigger_”. This is especially seen from Dongmyeong when he leans into the languishing rhythm of the hook, bending from note-to-note and emphasizing the shape of the lyrics.

There is a more pessimistic tinge to the fourth song of Voyager, although hope also exists in the form of a challenge. The lyrics come out swinging, featuring questions like “Why do we endlessly live other people’s lives?” and “Do you want to change standards together?”. The latter is sung in English, a smooth inquiry that jumps out as a total earworm.

Above all, “Trigger_” does not leave these sentiments as unanswered questions. Instead, the track empowers both the band and their listeners to make what you want to exist: “We are the starting point, The cool guys that will change the world”.

Speaking of the “starting point”, the final track brings Onewe back to their acoustic ballad roots. Although reminiscent, well, of their debut song “Reminiscence about all”, “From_” is actually around six years old. As the band discussed in their highlight medley, they have a history of busking and performing with “From_”. It’s a perfect song to close out the journey of Voyager. An acoustic guitar accompanies Yonghoon’s voice until the piano and light drums enter the mix with Dongmyeong’s harmonies. The mellow instrumentals allow the simple lyrics, especially the repetition of “I will gift to you”, to pierce listeners as they soak it all in.

Harmonization on the last “oohs” brings Voyager to a gentle close. Although another song does not follow “From_” and its underscore, the end feels less like a strict conclusion than a pause before beginning once more.

Despite clear experimentation, none of the songs get lost or drowned out by others. Voyager is sonically cohesive, yet simultaneously sonically and thematically diverse. There are recognizable elements of the familiar Onewe style in the vocals, instrumentals, and raps, but listeners witness how the band are growing as artists. Through Voyager, the band have pushed themselves to dive into new musical ideas and pursue inspiration in unexpected places.

All this is to say, Onewe have proven that they are confidently establishing their sound and what makes them unique. Voyager only increases anticipation for the band’s next adventure, whether they are still on Planet Nine, or if they embark on a new path. 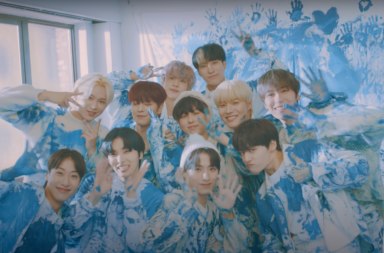