February is the shortest month of the year, though it was a busy month that was full of various holidays alongside the hustle and bustle of our daily lives. K-pop releases are often like February in that they often pack quite the punch in a short amount of time. MVs are often short but attention-grabbing, using a range of methods to be so. February’s edition of Unsung Artists explores some releases that have a cinematic element to them in the way they elicit comparisons to distinct genres of films.

As indicated by the title, in “Cinema”, Cix compare their relationships to a movie. Each feeling and moment that they share together is but one scene in their grand movie that is playing out as they are with each other. The song is the title track off of their fourth EP, Hello Chapter Ø: Hello, Strange Dream, which is also their latest addition to their Hello Chapter series.

The MV is upbeat, bright, and colourful as the members of Cix take part in the filming of a movie. The MV highlights the friendship between the members as they work together to create this film. They direct each other, decide on what is best, and most importantly they have fun. During the climax of the song the movie erupts in chaos as food, confetti, and toys fly through the air in slo-motion. At this point you can spot the pure joy on each of their faces; they have found their way to each other and are having the time of our lives. Their movie provides a record of the happy times spent with one another and “Cinema” strikes as a feel-good teen movie.

“Villain” is a collaboration between Good Girl castmates Cheetah and Jamie. The song and MV are both somewhat minimal and understated, though “Villain” still packs a hefty punch. The MV is visually striking with hues of black, white, and red dominating the colour scheme as a mini assassin story plays out.

The opening shot is black and white as Cheetah makes her way towards a man who is kneeling on the ground with a bag over his head so he cannot see. They are in a desert, and he is trembling in fear while she is holding a gun. It’s clear what is going to happen, but the context is a mystery. Is he the villain she is referring to, or is Cheetah herself the villain?

The latter turns out to be correct, as Cheetah is the assassin hired by other women to exact revenge on a man who abused them. The MV includes many close-up shots, but explicit scenes of violence are left out and the audience is left to piece together the story. It is not hard, however, to infer what has happened: a shot of an arm pulled back to punch someone cuts to a woman’s face with blood slowly dripping out of her nose. Cheetah takes bad-ass to another level, as she bears the dirty work and becomes the “Villain” that extracts revenge on behalf of other women.

Purple Kiss – “Can We Talk Again”

Another chilling release is “Inside” by Keembo. Keembo is a duo composed of two former Spica members, Boa and Bohyung, that debuted last year and “Inside” is the title track for their first album SCANDAL. The song details how the duo is unwilling to let go of their memories of the times they shared with their past lover, even if the actual relationship is over. They insist that their memories are their own right, and that they cannot be made to forget.

The lyrics, when combined with the 19+ MV, tell a much more sinister story. “Inside” has Boa and Bohyung putting a drastic end to things. Bohyung drags a bag behind her, and the ground behind them is streaked with blood. They wander through a dark, abandoned building, light fires, and stare into broken mirrors, all while the hazy filter on the MV heightens the sense of unease. “Inside” is an unconventional but memorable release, one that could be a trailer for an unsettling horror movie.

“Foolish”, by K-indie solo artist J.una, is a English-language song off the singer’s newest EP Discovery. “Foolish” begins with a narration that explains that this song seems like it is directed toward a particular girl, but it is actually about J.una himself and for anybody else who has experience distracting themselves from their problems.

The MV is quirky and upbeat, complete with narration, shaky camera angles and scribbled lyrics occasionally flashing across the screen. J.una watches TV, reads books, makes phone calls, and eats all to deflect from confronting his own troubles. At times he addresses a stuffed T-rex and sometimes he speaks to the camera, which drives the message that everybody has experience running away from our own problems, no matter how big or small. “Foolish” is cheerful but relatable, and it even ends with some advice as the audience is reminded to be honest about our own lapses in judgement. 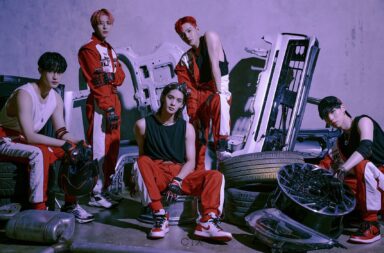