There’s a scene in MCND’s debut MV, “Ice Age,” that stands out from the rest. At the 1 minute mark, as the melody picks up for the pre-chorus, vocalists Minjae and Huijun perform a dance sequence together in a snowy gas station. For a split second, they look at each other, wave their shoulders, and share a smile capable of melting glaciers. The synergy, the light in their eyes, the silent acknowledgment between them—it all combines into a fleeting glimpse of something sacred.

Such is the special bond between the five members of Top Media’s newest boy group. While they have only been officially active for four months, they practiced together since 2016, released a pre-debut single, “Top Gang,” in January, and had their first comeback with the breezy, uplifting “Spring.” After finishing their promotions, the group talked to Seoulbeats via email about their friendship, their past, and their next steps.

“As our name implies, we want to meet fans as artists who make new dreams come true through our music,” says maknae Win, referring to “Music Creates a New Dream,” the meaning behind the acronym MCND. Previously part of the trainee ensemble Top Bro Jr., the group has spent the past few years cutting their teeth through various survival shows and competitions. In 2017, Castle J, BIC, Minjae, and Huijun went to Las Vegas to participate in NBC’s World of Dance. A few months later, in 2018, Minjae and Huijun participated as a duo in SBS’ survival show The Fan.

“I learned a lot about stage presence, manners, and eye contact. At the time, I was nervous because it was my first time performing for the public”, says Minjae. For outsiders, this goes unnoticed. In their performances from the show, what shines through is pure passion and charisma. “I think that the experience helped me perform on stage more confidently after my debut,” he adds.

At the same time in that year, Win—then a zappy 13-year-old—impressed the judges with his deep register and rap skills at MBC’s Under19. “Ninja,” the track he performed, was composed by MCND’s leader, Castle J. “He is the person who takes the best care of me,” says Win. “We eat together often and, when we practice, he gives me a lot of feedback and help.”

Castle J, the eldest at 21 years old, is a pillar for the group. His unmistakable tone permeates their songs, many of which he helped to produce. “Without question, I create tracks with our team in mind. First I make the beat, and then I think about the lyrics. I’m working really hard to compose songs that only MCND can perform,” he says.

Surviving in the K-pop industry is a matter of effort and luck, and building a distinctive identity is a vital piece of the puzzle. When asked if they relate to the line “life is like a game,” from their latest single “Spring”, Huijun agreed enthusiastically, “Yes, yes, yes!” It’s a natural answer for people who dedicated their formative years to intense training, competitions, and grading systems.

Nonetheless, their optimism doesn’t gloss over the hardships of being young idols. BIC, the always-smiling, razor-sharp main dancer of the group, adds that “all of the members began their training at an early age, so I think balancing school life and training has been the most challenging part.” When thinking about regular teenage things that they miss, Win reflects, “I personally would like to participate in various school activities like sports day, retreats, and trips.”

If they miss out an ordinary life on one hand, on the other they collect unique experiences. “We’ve been to the US four times”, said Minjae. “Once for the World of Dance competition in Las Vegas, another time for the “Top Gang” music video shooting. We also recorded some songs there and took lessons at a dance studio. We even did some busking at Venice Beach,” he adds.

Most of this content has been carefully documented and released on social media throughout the years. Even today, they maintain an impressive slew of dance practices, behind-the-scenes footage, vlogs, photos, tweets, and TikTok videos—Castle J’s personal favorite.

A highlight among all that content is their dance cover series on YouTube, Play Music Ground. From TVXQ to Billie Eilish, they cover a wide range of acts regardless of them being old or new, men or women. “We chose songs from artists that we like and respect”, said Castle J, who remixed many of the songs in the series. When asked about what other artists they want to cover in the future, Minjae mentioned Justin Bieber and Lizzo’s “Juice”.

During MCND’s debut period, at the end of February, the world was quickly shutting down due to the coronavirus pandemic. Concerts and fan meets were canceled. Music shows, known for their vivid fan chants, went silent. “We were really looking forward to meeting [our fandom] Gem, but we haven’t been able to, and we feel sorry about that,” says Castle J. “However, we’re trying to enjoy the current situation as much as possible because we believe there will be many more opportunities in the future.”

For now, as time passes and seasons change, Huijun guarantees that “you can look forward to an MCDN release for each season”. BIC confirms, saying their Summer comeback is on its way. “All of the members are preparing for our new album now!” 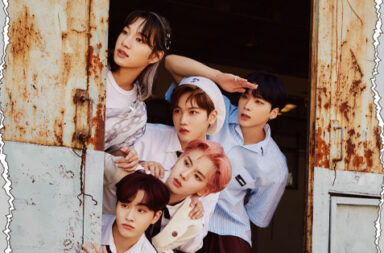