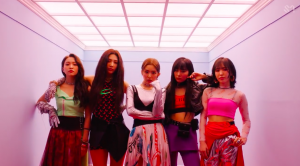 As their fifth anniversary approaches, Red Velvet has made their usual “red” summer comeback. Undoubtedly the group has always been unconventional and quirky when it comes to their music, but their latest single “Zimzalabim” brings weirdness to a whole new level. Just like their newest releases, this disjointed song is gaining mixed reactions.

Disjointed songs have always been part of SM Entertainment’s musical tradition, with the most iconic one probably being Girls’ Generation “I Got A Boy”. The song’s biggest strength was its chorus, where eventually all the parts the song was composed of lead to. “Zimzalabim” lacks the same impact of “I Got A Boy”, as its chorus is not a strong enough hook to carry the whole song. When the beat drops, the listener only gets more and more confused by the word “Zimzalabim” repeated redundantly, with no other instrumental music than some bells. 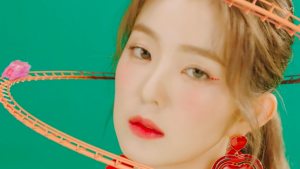 Perhaps the desired effect is indeed to confuse the listener. With such a premise, it’s not a surprise that everything about “Zimzalabim”’s MV makes little to no sense as well. The theme of this psychedelic comeback is an amusement park, and the MV is largely inspired by it.

At first, Wendy welcomes the other four girls in an amusement park, they are then greeted by Joy in an elevator, while Yeri leads them on a rollercoaster ride. A giant version of Irene’s head appears, before the girls ride falls in a cup of tea and, after a tea party, they take pictures together with Seulgi. As absurd as this might sound, the MV goes oddly well with the song.

Computer graphics are used extensively to recreate fantastical elements, such as the rollercoaster ride around Irene’s head and huge lollipops and candies floating in the air during the girls’ tea party. The quality of it is not very high, and it gives an unfortunate cheap impression. This cheapness is especially off-putting in the scene toward the end when Joy is surrounded by balloons — while Joy looks amazing, the same cannot be said about the balloons. 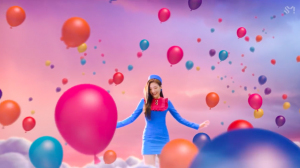 The girls’ styling is also bizarre, as expected. Neon colours in various shades of greens, pinks, and oranges dominate their outfits. Unfortunately, not everyone has been very lucky with the assigned styling. While Seulgi looks amazing in her purple biker shorts and black biker jacket, Wendy wears a furry neon green top paired with unflattering polka-dotted red and black leggings.

When it comes to hairstyle and makeup, things are kept surprisingly simple, possibly to offset the visual excess of the other elements. In the past, Red Velvet often showed unconventional hair colours such as bright red, purple and blue in their MVs. This time, everyone wears their hair in natural black or dark brown shades. Their makeup is also quite natural— only Irene wearing three small red dots as her eyeliner wings stands out.

If I were to compare “Zimzalabim” to an amusement park’s ride, it would definitely be a rollercoaster. While listening to it, it’s not very clear where the song is leading to, and its music video has the same confusing and almost nauseating effect. 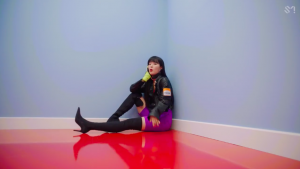 Experimenting with new sounds and images can lead to finding the style that perfectly fits for an artist, but in Red Velvet’s case, it’s actually quite the opposite. Their latest trend of coming up with unconventional comebacks is making them drift away from their characteristic sound and image that the public fell in love with. Since this comeback is the first one of a series, hopefully they will go back to a more cohesive sound with their upcoming releases.