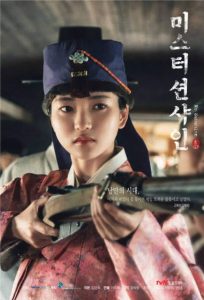 The famous K-drama writer, Kim Eun-sook‘s female characters have always been a point of contention in her dramas. Particularly now with her new drama, Mr. Sunshine, the question of whether Kim Eun-sook’s poor female characterisation will change has come up again. While she is renowned for her iconic heroes, her heroines are often underwritten and sidelined. Think of Cha Eun-sang in The Heirs, Kang Tae-young in Lovers in Paris, or Ji Eun-tak in Goblin. There are exceptions, more well-thought-out female characters in her dramas (Descendants of the Sun, Lovers in Prague and City Hall), but her dramas are always centered around far more compelling male characters.

Kim Eun-sook has even admitted that in her words, “I’m bad with [female characters]. I get a lot of critiques that the story gets pulled and centered around the male characters. I’m aware of that aspect.” So in the run-up to her current drama Mr. Sunshine, there has been a lot of emphasis on a change in the writing of the female characters in the promotions for the show from Kim Eun-sook and the actors.

“She’s a very complex, sophisticated and layered character and whenever I had frustrations and difficulties, I asked the director for help and tried hard not to make her a twodimensional flat character. ” –Kim Tae-ri

However, this is not the first time that Kim Eun-sook has promised change. During the press conference for Goblin, she said that she had reassured lead actress Kim Go-eun that all the characters would be appealing and complex and stand out. Yet her character Ji Eun-tak was a heroine without an independent, significant story arc and her main role is as a tool for the male lead.  The second female lead Sunny, played by Yoo In-na was given very little to do and was mostly defined by her beauty. 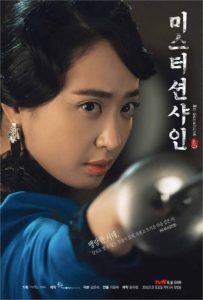 A well-written female character should be complex, with different sides and dimensions to them. They should have quirks that make them interesting and compelling to the audience. Overall, Mr. Sunshine is a sign of some progress with Kim Eun-sook’s writing of lead female characters having been made but we cannot be sure until the very end of the show.

The drama is about a young boy who escapes an oppressive life as a house servant and goes to the United States of America. He returns to his homeland later as an army officer. He meets and falls in love with an aristocrat’s daughter and gradually discovers a plot by foreign forces to colonize Korea. The aristocrat’s daughter and the female lead is Lady Ae-sin, played by Kim Tae-ri who also operates as an independence fighter. The second female lead is Kudo Hina/Lee Yang-hwa who owns the only hotel in the area, the Glory Hotel.

There was a certain moment in the show when I knew that there had been some change. In Episode 4, the maid Haman-daek (Lee Jung-eum) is moved away from a moving vehicle by another servant, Hwang Eun-sang (Kim Kap-soo). Usually, this would be displayed as a grand romantic moment, but instead, the show sharply moves away from this. Haman-daek responds to this action by saying “Why don’t you just rip my clothes off?”, and later she goes on to say “I have eyes and ears too, I would have moved out of the way” and “So much for my knight in shining armor.” This was the clearest and the funniest rejection yet in this drama of Cinderella-style tales that Kim Eun-sook has so heavily used in her storytelling.

The most important rejections of the passive female lead trope though are her lead female characters who are much more proactive and involved in the narrative. Lady Ae-sin is definitely an improvement from Ji Eun-tak. This is because Lady Ae-sin has a clear role that is not tied to the male lead but rather to the overall narrative of the resistance to the Japanese invasion. We see her doing shooting practice with Gunner Jang (Choi Moon-sung) and taking part in missions that drive the plot forward. In particular, her training scenes take place quite often on the show and take up quite a lot of time with the added dramatic music suggest that they are of great importance. Also interestingly enough at this point, she is much more active than the male lead who often appears to be reactionary and without any real purpose.

At first, I was worried about Kudo Hina/ Lee Yang-hwa’s role in the show. She appeared to be in a similar position to Sunny, restricted by her job as a hotel owner and unable to be truly involved as a character. Also, she is shown frustratingly to be jealous of the attention Lady Ae-shin gets from the male leads, something that Kim Eun-sook does with her female leads often and it looked like the second female lead would be reduced to the jealous female trope.

Yet Kudo Hina/ Lee Yang-hwa has gradually become more fully fleshed out and active in the show, using her power and influence as the owner of the only hotel in the area. In Episode 10, she makes the clever decision to buy the house of a killed traitor and in another episode, she goes to search through her father’s house for papers about her father. The show hints at her having a dark, intriguing past, that she had a terrible father who forced her to marry a very likely abusive Japanese husband who she probably killed.

So far, Mr. Sunshine does display some progress in female characterization for Kim Eun-sook but flaws do clearly remain. The thing that comes to mind is the “what is love?” sequence which was not just ridiculously excruciating to watch but showed a need for the female lead to be shown as naive and innocent, contradicting her being previously depiction as self-aware and clever. As well as that, the show has an unnecessary tendency to use violence against women as a shortcut character introduction or a plot device.

Yet the biggest thing for me is that we cannot be sure that the female characters will not be sidelined in the rest of the show so I cannot say until the end of Mr. Sunshine that a change has actually taken place.