Twice's "Dance the Night Away" is a Fun Summer Release 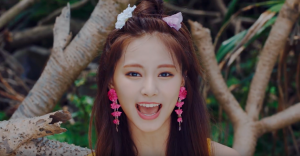 “Dance the Night Away” is mostly set on a beach. Twice shipwrecked on a deserted island and despite it all, they seem to be enjoying their time there. At first they make themselves cosy, building small nests on the shore, then they dance in various settings and even throw a party on the beach. At the end of the music video they see a ship approaching, but they decide to stay on the island anyway. While the plot itself is pretty simple, it is fun and effective regardless.

In line with the best summer comebacks tradition, the music video’s location is a tropical paradise: the beach of Akabaka in Okinawa, Japan. This setting can be considered the strongest element of the whole music video. The location’s influences can be traced in several props the girls use. Momo is seen playing with hermit crabs, Tzuyu, Jeongyeon and Chaeyoung pick up tropical fruits, and all the girls have tropical flowers used as hair ornaments.

There is a particular attention to details in the girls’ styling. The choice of bold accessories, such as statement earrings, is interesting and matches the girls very well. They wear four sets of outfits: white gowns to match the “castaway” image, a set of casual clothing when they’re exploring the island, swimwear and cover-ups when they are playing by the beach, and finally a more elegant attire for the night’s party by the shore. 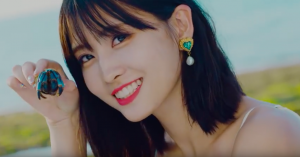 While in the past Twice’s title tracks were written by JYP himself or Black Eyed Pilseung, for “Dance the Night Away” JYP Entertainment went for a different group of composers, the same of Red Velvet’s “Peek-a-boo”. “Dance the Night Away” is an upbeat song with EDM influences. The song itself is very catchy and perfectly matches the summer season. The choruses are by far the strongest part of the song: the english hook (“Let’s dance the night away”) combined to the EDM instrumental simply stick to the ears.

Twice might not be the strongest vocalists on the K-pop scene, but the song holds its own anyway. Still, the post-production of the vocals has some flaws. Momo’s part in the  first verse sounds a lot more airy and flat compared to Sana and Jeongyeon’s parts that come right before and after hers. Jihyo’s long and high note at the end of the song is also too crisp—almost strained—and even sounds out of place. 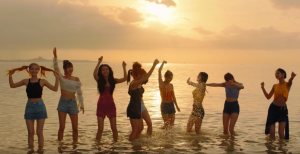 Twice are undoubtedly one of the most successful girl groups in K-pop. Because of this, expectations are rightfully high when it comes to their releases. A criticism that their latest releases often received is that these releases are too childish, and limit Twice’s potential that caught everyone’s attention in their earlier music. “Dance the Night Away” seems to be a step toward some kind of growth in their sound. While “Dance the Night Away” is still a bubblegum pop song, it features some EDM elements which help Twice sound more in line with the current trends in music. At the same time, they don’t give up to their signature cuteness.

When it comes for summer comebacks the competition is always ruthless and this year it is particularly intense for girl groups. With its colourful music video, its catchy melody and the girls’ stunning visuals, “Dance the Night Away” is a good fighter in this battle. It also seems like a good song to help Twice transition to a more mature image and sound.