GFriend Have Fun with "Sunny Summer" 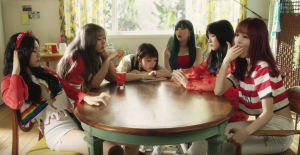 If there’s one thing summer means, it’s new music. Think crop tops, beaches, fruit juices, parties, and upbeat bops to sing along to. But in the K-pop sphere, there’s a mutual understanding that the season is the time where girl groups come to dominate and try to out-summer one another with their sunny jams.

After Sistar, K-pop’s queens of summer, disbanded last year, there has been a heated battle among newer and fresher girl groups to become the next summertime queens. Though there have been several groups up for the challenge (just look at the charts – it’s filled with girl groups), summer bops can very easily sound homogeneous, but GFriend has returned to declare that they are a potential front-runner in the stiff competition with “Sunny Summer”.

Graduating from their previous lacklustre releases, they’ve enlisted the help of Black Edition and Duble Sidekick this time round, who produced several of Sistar’s summer bops and this change proves to bring out a slightly different side of the girl group. 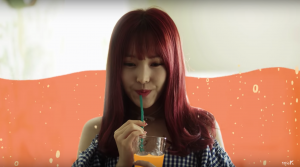 Delivering refreshing summer feels from the get-go, “Sunny Summer” is a bright synth-pop piece that’s a little more experimental from GFriend’s standard fare. The track starts off strong with an upbeat rhythm and breezy synths as the girls sing about having a memorable summer together. It also pulses with a funky guitar riff in the background that enhances the overall ebullience of the seasonal jam.

It’s easy on the ears and brings about an enjoyable listening experience. That said, the track is also lacking a substantial oomph to really anchor things into place. There isn’t a heavy beat weighing it down. Besides the slight sonic ascent in the chorus, this song uses the same formula that’s applied to plenty of generic girl group summer releases. Maybe because it’s a special mini-album that they’ve put together for their fans, but the song is lacking two things: 1) Yuju’s usual high notes to set things over the edge and 2) the group’s traditional power dance break in the bridge. We can’t always have what we want, but including either of the two could have really packed a stronger punch and tied the loose ends together. 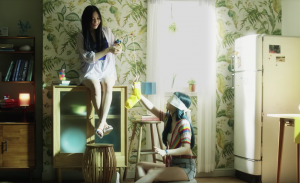 In the highly dense market, GFriend prides themselves on their idiosyncratic sound – a mixture of mid-2000s pop-rock and second generation K-pop’s bubblegum pop. It’s great that the girls play this to their strengths because “Sunny Summer” could have easily ended up as another girl group summer song, if not for the nostalgic-inducing sound that they have to their name. The chorus especially harkens back to the older days of K-pop, where summer songs were bubblegum pop feel-good anthems and not quick releases just for the sake of joining the summer crowd.

One nice touch here that deserves a commendation would be the nuanced injection of the members’ names into the lyrics. This is fairly effective in boosting the overall listening experience, without making things a cringe-fest, alongside the verses’ staccato stutter-step beat which makes it fun for fans to sing along.

The MV is fun to watch, though there isn’t a discernible plot. It starts off with a quote from William Shakespeare’s Sonnet 43, adding a surprising but elegant touch to the mix. However, it would have been laudable and enrapturing if they had followed through with the quote and developed it further because the untouched quote now seems a tad unnecessary and cliché.

The MV mostly consists of interspersing scenes of the girls being silly and partying with one another – viewing the world through heart-shaped lenses and camcorders – and engaged in cute antics that lean more towards the fanservice side. What I’m ambivalent about is that the video largely comprises indoor scenes and the colouring is obscure – a little too desaturated for a summer release and the dullness doesn’t do any justice to their bright red and blue outfits. 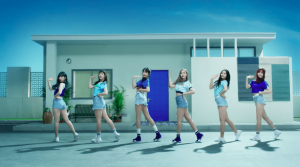 Following the MV, the choreography is borderline basic and GFriend’s sharp, knife-like precision isn’t flaunted here, much to our dismay. They’re dabbling with easy and cute dance moves, namely the common hand-waving move that we’ve probably seen for the umpteenth time from girl groups. Sure it’s just a summer release, but for an all-rounded comeback, they could have brought something more original and refreshing to the table.

“Sunny Summer” isn’t exceptionally ambitious nor is it compelling enough of a summer release to crown GFriend as the new summer queens, but the melody is catchy and lyrics are fun enough to sing along to – it wouldn’t have any problem going mainstream, but it’s going to be hard to overtake Sistar. Will GFriend be hailed as the new summer girl group or will another group take the reins? We’ll have to see. Now, let the summer fun begin.