Elris has released their third mini album Summer Dream, with the title song of the same name. “Summer Dream” is a fun and upbeat summer comeback, but without anything to really grab the attention of future fans, it falls a little flat. Compared to the group’s first couple of releases, “Summer Dream” seems to lack a little something, both in the song itself and in the MV, and is an anticlimactic ending to heightened expectations since “Pow Pow” last year.

Although it’s not necessarily a poorly made song and MV, at this important moment in their career of building a fanbase and establishing an image, Elris’s latest release doesn’t fully achieve what it should.

The MV has certainly been made with an eye for aesthetics, with its weighting on the summery combination of white and bright blue. It only showcases a small and simple part of the song’s choreography, instead choosing to create a relaxed and happy atmosphere through individual shots of the girls, or carefree group ones, all in settings with vibrant colours.

The scene with Yukyung reclining on a white oyster-shaped pool float is a particularly impressive and visually pleasing reference to floating on cloud nine. She holds a larger-than-life oyster in her hands, which symbolises the good fortune of finding her summer dream and how priceless it is for her, and how the lyrics suggest a hope for its continuation in real life.

I wanna go to the end of the earth with you

With closed eyes, I’m praying that my wish will come true

Yet this is a rare well-thought scene in the MV: most of the video seems more focused on pure aesthetics with little depth. Despite the lyrics describing a love interest in such a smitten way, the MV only depicts summer, and doesn’t allude to the idea of a dream all that much. 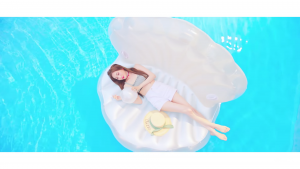 The ocean full of waves, your eyes beaming down on me

The atmosphere of a dreamlike bliss could easily have been achieved through a hazy filter or rosier tones throughout instead of at specific moments, or even through touches of surrealism. The oyster shot is a good start, but the MV needed to have developed the concept further for it to be more noticeable. While the images of the sea certainly contribute to a feeling of being swept into a current of joy, the MV doesn’t do much with them, instead simply scattering them around. 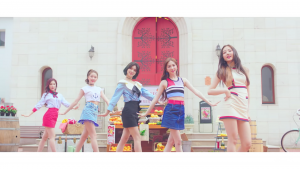 The song itself, while suited for the summer, is not particularly ambitious. Lacking a distinct melody, it isn’t too memorable either, relying more on a simple and repetitive chorus which feels slightly rigid. This is especially prominent because the chorus is sung four times in the song, completely framing it; only the bridge stands out as something dreamier and softer, and more pleasing to the ear. The lyrics too are somewhat repetitive and uninspiring, with borderline cliche references to the sky and the sun. The water and sea imagery are slightly more creatively done, but as this is the main setting for the MV, it still feels like the metaphors could be more intricately developed.

On the whole, “Summer Dream” is a missed opportunity, as so much more could have been done with the release, stemming from the concept of warm and dreamlike love. The song is satisfactory at best, and fails to continue at the same level as the impressive beginning to Elris’s music career. Knowing what the group is capable of, and how interesting their MVs can be, “Summer Dream” feels like a quick and lazy release. Will it be enough to attract attention to the group amidst the array of other summer K-pop comebacks?