Day6 Gives It Their Best Shot with "Shoot Me" 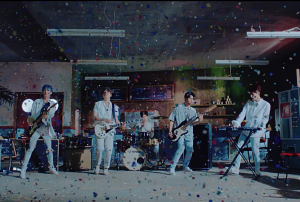 It has been a good six months since we’ve last heard from Day6 after they rounded up their monthly Every Day6 project at the end of 2017. After consistently putting out new releases every month last year, not looking forward to their monthly comebacks this year did feel a tad strange and empty. But patience is a virtue and after getting their well-deserved creative break, “Shoot Me”, one action-packed banger of a song, proves that the wait was worth it all.

A stark difference from the group’s mellower releases in the second half of 2017 like “I Like You” and “When You Love Someone”, “Shoot Me” takes on a bolder and grittier approach. The song encapsulates punk rock bombast with such great finesse that it instantly hooks listeners on first listen.

As usual, the band participated in the production of mini-album Shoot Me: Youth Part 1. “Shoot Me” is driven by a dynamic thumping beat with such fervour and zeal that makes this song incomparable with any of their past title tracks. The band has also adroitly infused electronic influences into their signature rock sound, with lyrics by Day6’s resident lyricist Young K.

The piece starts with a reggae rhythm, before diving into a fine harmony of percussive shifts and synth strings. The build-up to the chorus is brilliant here. It reaches a sonic climax with the explosive and anthemic “bang bang”, that’s instantly accompanied by the sound effects of a gunshot, and the belting of “bullet bullet bullet” following that.

Aurally enticing, “Shoot Me” takes listeners through a well-routed journey of unadulterated frustration and angst. The track balances nicely between hard rock and electropop, without becoming too overbearing or too heavy metal-like.

The bridge also amps things up with passive-aggressive chants of “I’m okay, so if you want to hurt me, baby, just hurt me.” Everything – including the smashing bass line, drumming by Dowoon, and Wonpil’s synthesiser solo – all comes together to form an intense, dramatic masterpiece.

Besides being equally talented and skilled at playing their respective instruments, another thing that Day6 excels at is the interplay of their vocal tones. I can’t ever emphasise enough how well the members’ vocals complement one another. That said, their distinctive vocals still manage to shine through individually.

Unlike the straightforward, hard-hitting track, the MV on the other hand has a more subdued quality. It offers more than what’s on the surface. This doesn’t mean to say that it falls short of matching the track’s intensity – in fact, the symbolic undertone of the MV is what makes the entire release so beguiling.

The MV is set in a restaurant and focuses on a couple who just had an argument. At first glance, it appears to be your typical couple fit – girl is hurt and boy is to be blamed. But the narrative here isn’t just that two-dimensional.

After being mercilessly shot by the bystanders, the male lead finally retaliates and the female lead appears shocked, as if appalled by his audacity to fight back. Here’s where it gets interesting: instead of bullets, the male lead fires back with colours, painting the noir cinematic scenario back to its original colours while leaving everyone completely unharmed. At the end, he sheds a tear and even offers a soft smile to the distressed and possibly repentant female lead.

Deviating from the romantic storyline, the MV can also be viewed as a parallel of Day6’s – or celebrities’ in general – struggle with the backlash from the media and netizens. Generally, it doesn’t take much for us to judge and condemn when we find something not to our liking, especially when we are on the receiving end. But we also tend to forget that our words, even towards celebrities and popular figures, carry weight and can affect them more than we’d ever know. 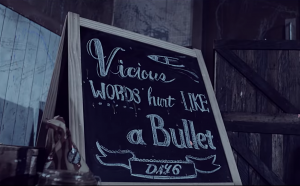 The phrase “vicious words hurt like a bullet” is also frequently seen in Day6’s promotional materials, perhaps highlighting that verbal abuse can have a similar or greater impact than physical abuse. The lyrics also evoke feelings of frustration and resignation, carrying with it a sense of despair from being beaten down yet again.

Our words toward each other
Are getting sharper and sharper

Without fail, Day6 showcases another facet of their musical abilities in this comeback. There is nothing unadorned about this song. It’s satisfyingly intense, catchy, and packs a punch. “Shoot Me” might be the track that puts the rock band at the highest pinnacle of their discography, but if it doesn’t, this incredibly well-crafted release will hopefully propel the upward trajectory of their career and artistic maturity. I’m looking forward to their live performances and what’s yet to come in the near future, since this is only the start of a new and promising beginning.