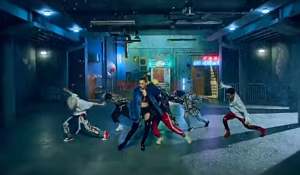 While I love hearing K-pop stars sing or speak in Spanish, I wasn’t sure what to expect when I heard Super Junior was releasing a track titled “Lo Siento” with Replay, a repackage of Play released last November. Much to my delight, the MV to “Lo Siento” is a magical mesh of Latin-pop and K-pop that I didn’t know I needed in my life.

Considering that Latin American listeners are a huge fanbase for K-pop, it’s not surprising to see this kind of collaboration, and it’s not the first of its kind. In 2016, CN9 and Crayon Pop released the bubble gum pop song, “Get Dumb,” which was entirely in English, that really didn’t hit the mark for me. Upon hearing that Leslie Grace would be on “Lo Siento,” I thought maybe their musical styles would be too different to combine. Leslie, who is American and of Dominican descent, typically does bachata music, a slow and romantic type of dance melody which originated in the Dominican Republic. However, she did release a daring and sexually-charged pop song,”Duro and Suave,” earlier this year, which showcased her ability to tackle other genres. She brings that same fearless attitude to the MV for “Lo Siento,” giving the song an empowered female voice. 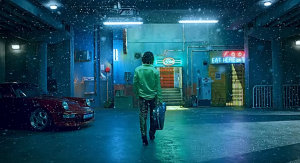 The MV starts off with an upbeat guitar tempo as we see Heechul walking into a snowy garage. Why is it snowing in a car garage? Aesthetics, that’s why. Also, it creates a dreamy and secretive atmosphere. It then switches to Super Junior standing against a geometric background with yellow and orange–vibrant colors that will repeat throughout the MV. The hot and cold colors symbolize the back and forth between the male and female voices as they try to cool down a heated interaction in this frisky song.

The members enter wearing various outfits that range from hip-hop inspired to Latin-influenced. The bright colors and various floral or geometric patterns in their clothing creates a tropical feel in contrast to the dark, blue-lit garage. Right from the beginning, every member has a surprisingly bored look on their face, especially Shindong, who doesn’t ever seem to be enjoying himself in the MV. Obviously, they’re trying to look cool, but they come off as disinterested which doesn’t depict the song’s tone accurately.

The MV contains a simple story of various flirtations between the members of Super Junior and a woman in a blue dress. The scene transitions are a bit odd–we’d see a member dancing with that female character and then suddenly they’re dancing with Leslie Grace as if they’re the same person. The other actor appears in the more sexually suggestive scenes, suggesting that the producer might have been trying to avoid placing Leslie Grace in those scenes. It’s an understandable choice, but it makes the shifts awkward. 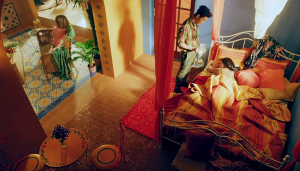 The song itself is about a spontaneous romance on the dance floor and the plot follows along that interaction to its end. The boys are first trying to woo their love interest, and then move to dancing provocatively with her. Ultimately, we see images of her in a bed with various shots of berries and fruits suggesting a sexual interaction. While the boys are singing about their interest in a girl and naively wanting to take things slow, Leslie’s parts are apologetic because she only sees this as a casual affair:

The conversation between the male voices and female voice is an interesting mix of three different languages: Korean, English, and Spanish. While it might seem like it’d create a jarring experience, the transition between the languages is natural and manages to map the rift between the languages onto the song’s theme of different expectations of a relationship. Like how the male and female voices aren’t singing in the same language, neither party is able to clearly communicate their wants to each other.

Just as smooth is the introduction of Leslie Grace into the group’s dance routine. I was initially worried that she would look overwhelmed dancing with six members of Super Junior but with her primarily in the center, she looks like she has been part of this K-pop group from the very beginning. She synchronized well with them and kept up with the group’s more pop and lock dance moves. At the same time, she brings in her own more hip-centered and seductive dance moves during her solo parts, and they all do a body roll in unison that will make your heart race.

One of the highlights of the song and MV are the romantic interactions between Yesung and Leslie Grace as they harmonized together, both showing off their range without overtaking the song. At the end of the song, the vocalists take a backseat, and the catchy chorus is not repeated like it sometimes is in other songs. Instead, it leads to Heechul who wraps up the song with a sultry rap, giving the song a more sudden ending. 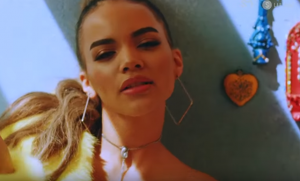 “Lo Siento” is an excellent step for Super Junior to expand on their musical abilities as well as acknowledging their Latin American fans. The song and MV are both a mixture of musical wonder and diversity. Leslie Grace is an amazing and appropriate choice to help lead this sexy collaboration–she embodies female independence in the song. She has enough energy and charisma to keep up with the members of Super Junior. For now, KARD members Somin and Jiwoo have been participating in the “Lo Siento” music show performances–a choice that possibly nods to KARD’s big Latin American fanbase that they’ve acknowledged before in YouTube reaction videos–but here’s hoping we get to see a live stage with Leslie Grace.