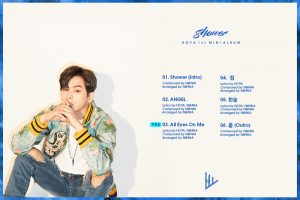 There’s always something bittersweet about a member leaving a group. On the one hand, as a fan you are losing a person that you see as a vital member of a unit that you’ve grown to love. On the other hand, now that they’re no longer in a position where they feel bound, it’s exciting to see just what they’re going to do with their new “freedom.” Such is the case with Hoya, who left Infinite last year. He’s now returned as a soloist with the mini album Shower, his first musical effort since the split.

Shower shows Hoya in a whole new light. The smooth vocals and overall polish of the album are a testament to his eight years in the game. From the intro to the outro, the album is full on R&B with all the smoothness and swag of a 90s singer mixed with the coolness of Hoya’s established personality.

Pre-release “Angel” sheds the boy group image and establishes Hoya as a grown man. Usually a song titled “Angel” would be a sweet song about innocent love of a pure girl. Hoya’s angel is the opposite of that image, with a sensual vibe that definitely does not leave his intentions to the imagination. Nothing about the song is subtle, with lyrics that speak to tangled hair and smeared lipstick, of going deeper, and holding tighter.

If that’s not enough for you, the MV, though simple, helps to sell this point. Though for most of the MV Hoya shows off his excellent dance skills alone or with other male dancers, the chemistry between him and the lone female dancer burns through the screen. Their dance is pretty sexy and they’re not afraid to get on each other.

The title track, “All Eyes On Me,” takes on a more hip hop feel but continues to let Hoya’s vocals shine through. The video showcases a lot of Hoya’s dance skills. The best part of this song is that this is a real calling card. The lyrics are all about this new venture as a solo artist and how all eyes are on him. He’s in the spotlight now, and he’s going to do whatever he wants, because he has the freedom to do so. Every group or artist gets to the point where they say “Whatever, I’m doing my thing now,” and “All Eyes On Me” is Hoya’s version of that.

The songs on Shower are varied enough that they don’t all feel like a blast of nostalgia, yet they all work to really show off Hoya’s abilities as both a vocalist and lyricist. For example, “Point,” can be seen as both a break up song and a song for fans that felt lost in the dark while Hoya was away immediately after the split:

I, who could not  say anything
And could not even take one step towards you
Even if the world curses me I will hope that
At least you understand me 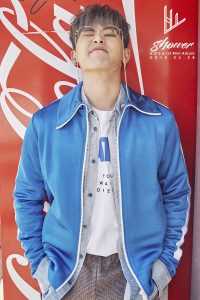 The song goes on to express the promise that he will wait, just as his fans waited for him. In “Sigh,” he expresses a remorse over times past that he knows he can never return to. The themes of songs vary, but tie back to the album title subtly. After all, when you shower, doesn’t your mind tend to think of things that are a bit all over the place?

As a casual listener of Infinite, everything about Shower really blew me away. Knowing Infinite H, I was familiar enough with Hoya to know that his vocals could carry a tune when necessary, but the strength of his vocals on this album blew me away. The falsettos on “Angel” and “Point” are especially beautiful. As Hoya is known as a rapper, it was refreshing that this was not a rap album. In fact, Shower excels as an R&B album by the simple fact that it’s not a genre that recent K-pop acts generally specialize in. We have Crush, Zion T., Dean, and the like, but they aren’t idols. There are groups that will release an R&B-inspired track or two, but we rarely have a strong artist that shines in the genre who can dance while crooning to you.

Hoya has put together an exquisite album that has established him with an image and direction that are distinct from his former ties. With this new perception of him now out for public consumption, here’s hoping that he continues on this path and releases more jams with the intent to do the kind of music that he’s always wanted to.