Suzy's "Faces Of Love" Will Blow You Away 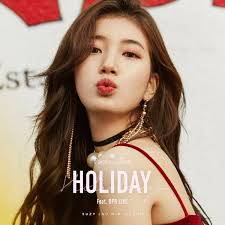 Here’s a secret about pop music: you don’t actually need to be a great singer to be a great pop singer. It’s not necessary to be able to belt, hit the whistle register, or have a six-octave vocal range in order to succeed at making good pop music. Those skills make it easier, sure, but good production and the ability to sell a performance can make a pop album in ways raw vocal talent can’t. Hence why Faces of Love, the first solo comeback for Suzy is a pretty darn good piece of pop music.

Suzy is not the greatest vocalist. She is solid at best, with a limited range and a very soft tone. However, she is a good performer, able to shift from wistful to coy to heartbroken with ease, and all sounding quite believable, which gives her a solid base to work from. More important than that, however, is the production. Many solo debuts, especially for female idols, are ruined because their labels either do not understand what flatters a particular voice or ignore that knowledge in the name of trends. JYP does neither. 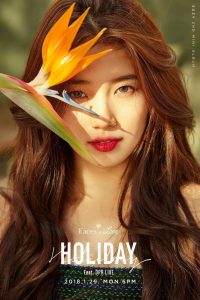 Faces of Love flatters Suzy’s voice from start to finish. It is loaded with soft, mellow tracks that demand a delicate voice or risk being overpowered, so the pairing with Suzy’s voice is perfection. She’s never forced out of her comfort range, instead bending the tracks to her voice. She’s given enough room to emote, but the mix is tight and clean, providing a sense of polish and class that only enhances the femininity of Suzy’s voice. Honestly, this may be the best Suzy has ever sounded. Even the ballads work, as they live in the constraints and bring texture in from the instrumentals, rather than relying on the Suzy alone.

However, those ballads are the achilles heel of Faces of Love. It’s not that they’re bad–again, Suzy’s airy voice paired with piano and filled with heartbreak sounds gorgeous–it’s that they’re numerous. There are seven tracks on Faces of Love, and four of them are ballads. There is such a thing as piano ballad overload, especially when working with a more limited vocalist. Yes, Faces Of Love does give Suzy her best foot forward, but most ballads can utilise more complex vocal lines to create interesting variations. Suzy’s range and vocal tone just don’t allow for as much variety, and as a result, the back half tends to blur together.

That blurring is not helped by the content. The front half does show a decent variety of perspectives on love, from the opening “In Love With Someone Else” showing a relationship from the perspective of the one who leaves, to “Bad X” where Suzy’s still dumping her boyfriend, but rather than leaving for a new man, she’s ending this one because her boyfriend can’t meet her emotional needs, and she doesn’t see the point in pretending this is going to work out. Suzy’s delivery adds a wry, sardonic touch that provided a great counterpoint to the borderline saccharine production.

Then there’s “SObER”, the album standout. Light, fizzy and playful, “SObER” is the soundtrack to a plastered lovestruck idiot’s brain, and is thus the perfect backdrop for Suzy, having drunk enough to lose her inhibitions, to confess her feelings… and then realize she’s not drunk enough to write it off when she gets rejected. “Holiday”, with a feature from DPR Live, is the only track where Suzy gets to enjoy a romance, as she languidly meditates on the ability of a good romance to make you feel as calm and relaxed as a vacation. However, the remaining three tracks all follow the same theme: Suzy pining for a guy who dumped her. I’m all for the exploration of failed relationships, but once again, there’s only so much heartbreak one mini can provide before the topic starts feeling stale.

Faces Of Love is a fantastic sophomore effort for Suzy. She sounds fantastic, the production is top-notch, and it proves that JYP understands how to promote her as a singer.