Red Velvet Are the Epitome of Girl Crushes in "Bad Boy" 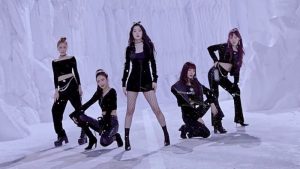 Red Velvet are setting off 2018 in style with their new MV for “Bad Boy”. The title song is taken from The Perfect Red Velvet, a repackaged version of their second LP Perfect Velvet, released last November.

This is a significant step forward for the group, as it marks SM Entertainment’s first repackaged release for a girl group since SNSD’s Mr Taxi in 2011. With the recent departure of several key members from SNSD, and f(x) pursuing individual projects, SM may be strategically refocusing on Red Velvet; with a new web show and Twitter account recently unveiled to boost the group’s profile. In any case, the group is on a roll, totalling three successful comebacks in 2017. “Bad Boy” is an interesting new title track, bringing the ‘velvet’ side of the group’s dual concept to the fore. After recent releases “Rookie” and “Red Flavour” were bubbly and upbeat, “Bad Boy” showcases the girls’ more sultry side, with a captivating R&B sound and visually compelling music video.

While the song may be titled “Bad Boy”, the video focuses solely on the female members, opting for aesthetic and imagery rather than plot. This is no loss, however, as the illusions peppered throughout capably carry the theme while allowing ample time to flaunt Red Velvet’s dance skills and new girl crush concept. The choreography is their most mature yet, swapping aegyo flourishes for gun signs, and showcasing a sexier style replete with fishnets and black fur coats.

The character the girls evoke is the voice present in the lyrics, which showcase a bold attitude to relationships not often heard from female artists. Red Velvet flaunt their confidence, singing:

You’re already halfway fallen for me 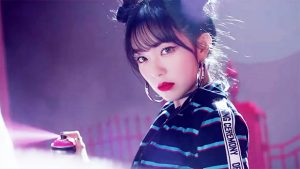 The repeated refrain of ‘bad boy down’, further evokes a sense of the girls winning a game, and literally shooting down their prey. They wield spray paint and hold the viewer at gunpoint, burn a camera – perhaps to hide evidence – and dance before an array of bloodstained mannequins. It might be macabre, but the editing glosses over the detail and slots in enough choreo shots enough to keeps things pretty.

A key motif in the video is that of the white book, bearing the French title Ceci n’est pas de la lèvre, which translates to: this is not of a lip. This is an interesting allusion to the Surrealist painting Ceci n’est pas une pipe, by Belgian artist René Magritte. While the book the girls read does indeed feature lips on the cover, this is only an image, perhaps signifying that their allure is not indicative of the promise of love, but merely a game. This is echoed through the framing device featuring Seulgi carrying the suitcase at the beginning and end of the MV. Once the bad boy has fallen for them, the girls of Red Velvet move on to the next without a single look back. 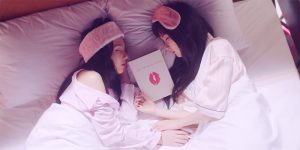 Nonetheless, it is interesting that while the song is lyrically a one-note display of sultry bravado – alluding to the femme-fatale archetype too often seen in more mature concepts from K-pop girl groups – the music video also allows for Red Velvet’s softer side, revealing a lose plot structure around their triumph over the bad boy. And maknae Yeri offers a counterpoint to the sultry bravado of the other girls, as they cover her eyes to protect her from the scenes of drinking and violence.

Throughout the MV, the colour palette shifts between stark monochrome to warm reds and pinks. This contrast alludes to overarching theme of the girls evading the titular bad boy’s charms to take control. The white scenes show them in school uniforms, with Yeri sitting on an inflatable unicorn to evoke innocence, while shots framed in scarlet or magenta focus on the group dancing in a shower of dollar bills and drinking champagne in clearly-defined displays of maturity and power. The repeated focus on the bed and the girls sleeping, then opening their eyes at the very end, suggests that they have woken from the bad boy’s spell to find their independence. 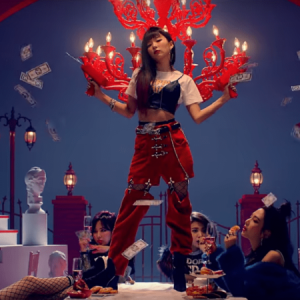 This theme is fitting as the music video and song are the most mature Red Velvet have released to date. The track’s trio of producers, The Stereotypes, Maxx Song and Whitney Philips, create a lush soundscape of synths set against an understated trap beat. The instrumental is beautifully minimalist, incomplete without the addition of Red Velvet’s vocals, which take centre-stage here to anchor the track’s smooth, haunting melody. The harmonies the girls bring to the chorus are perfectly aligned, but each member gets her individual chance to shine. R&B is a genre with an established record of foregrounding vocals over production, and this stylistic choice is a brilliant opportunity to showcase Red Velvet’s talents. The ‘oh-way-oh-way-oh’ hook adds an addictively catchy dash of cute to the mix, perfectly melding the duality of Red Velvet’s discography.

With “Bad Boy”, Red Velvet forego their characteristic quirky cuteness for their darkest aesthetic and most mature sound yet. The result is a compelling comeback, in which SM Entertainment arguably melds the best of f(x)’s offbeat vibes and “Run Devil Run” / “You Think” era SNSD to present a girl group with their own distinct edge. With a well-rounded backlist of hits and more than enough charisma to own the girl crush concept, Red Velvet have taken things up a notch. Here’s hoping they’ll be back soon, and even better.