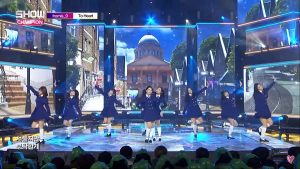 It’s time for another edition of the Best of Weekly Music Shows! During any other year, we’d see lots of idols dancing and singing on multiple shows, but this year is different. With the Winter Olympics being held in South Korea, a number of shows are taking a hiatus to accommodate the constant coverage of the event. Between media strikes, year-end festivals, and holidays, I’m becoming painfully adjusted to the lack of new musical performances. It’s great that many countries are participating in the games, but I do miss seeing more stages this week.

I’m sharing a small selection of favorite performances from this past week. If there were stages that caught your eye, feel free to talk about them in the comments! You never know who else liked the same ones as you.

It feels like Momoland has been promoting this song forever, and I’m still entertained by their performances. I don’t have a bias since this group makes it hard to choose a favorite member. You’d think the girls would lose a little bit of energy after weeks of this bouncy tune, but they’re going as strong as they did in the beginning of promotions. I really adore their stylish black and white outfits. JooE wasn’t wearing her iconic pigtails, but that didn’t stop her from screaming her heart out during the cheer. She’s a ball of fun.

I’m easily won anytime a concept involves boots. I don’t know why boots are synonymous with sexy badassery; they just are. The ladies killed it in their pinstripe jackets and tall boots. I can always rely on this group to deliver fabulous moves with the right amount of girl power. The sleek shoulder shake they do during the chorus is a simple part, but I enjoy how Gugudan elevates it with their facial expressions.

It’s fitting that this group is promoting this song when many idols are graduating from school. Their blue winter outfits add to the whimsical vibe of this song. Of course, I didn’t pick this one for the outfits alone. “To Heart” sounds like one of those inspirational tunes played in the opening of an anime. Their choreography matches the brightness of the melody with eye-catching formations. As a former marching band member and cheerleader, I approve of how well they executed this routine.

Look who came back! Seventeen is one of the few groups I never hesitate to watch first on music shows. They exhibit an unrivaled musicality that puts them at the forefront of fantastic male groups who dance incredibly well. The sharpness of their moves combined with the fluidity they display as a large group leaves me speechless. I can’t recall a time when my mouth stayed closed watching them. Whether I was screaming internally or upsetting the neighborhood dogs with my yelling, I’m sure both reactions were accurate.

Is there anyone who is tired of them? Yeah, I didn’t think so. Once again, I faced the dilemma of choosing between their performances. When it comes to a group as talented and solid as Red Velvet, it’s not uncommon to have such an issue. Look at Seulgi in that outfit! Can I be reincarnated as Joy? Or Irene? It’s almost unfair that they’re all so flawless. Hopefully, they’ll attend Kcon, so I can shout my love loud enough for them to hear.