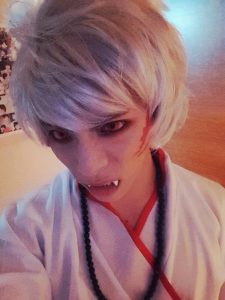 As October comes to a close, we also come closer to Halloween, and all the dress-up opportunities the holiday presents to participants — including all our favourite K-pop idols! In honour of this year’s holiday — and the parties that went along with it — we ask our readers for their favourite idol dress-up/cosplay moments, be they for Halloween or any other occasion.

Pat: I have been waiting for this one. For non-Halloween, or at least this was before he debuted so who knows when this actually was, I go with VIXX‘s Hyuk dressing up as Naruto’s Sasuke like the Naruto trash he is. I also loved Jonghyun as Inuyasha – because I, too, love Inuyasha and my SHINee fave dressing up as one of my favorite characters was just memorable to me. I guess I should also mention Jonghyun going as Naruto that one year, just because he made me actually go back to watching Naruto after I had dropped it.

But most importantly, my favorite costume moment is Super Junior collectively dressing up as Frozen’s Elsa. Super Junior generally have great costumes during their usual costume segment of their live shows, but the Elsa one was just amazing. 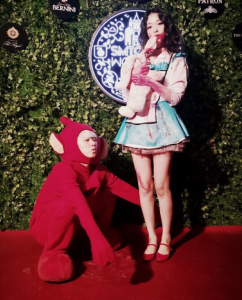 Carly: I think one of my favourites of all time has to be when BTS’ Rap Monster dressing up as Sailor Moon, I believe because he lost a challenge. The pure belligerence in his stance has always mesmerised me, and while BTS do some good Halloween costumes, I haven’t seen anything to beat Rap Mon. Along the Sailor Moon vein, I enjoyed Twice as Sailor Scouts for their SNL segment. Both Sistar and Twice had Sailor Moon inspired costumes, though while Sister went a more polished and sexy look, I preferred Twice’s skit because their expressions come across as genuine. What I really want is to see all of Twice cosplay Sailor Moon together! They did their Harry Potter look, which was admittedly, cool, but how are all of them Gryffindors? They should have represented all the houses!

I also loved Key and Onew as Ronald McDonald and the Colonel- it’s quite different, especially for K-pop, and kind of hilarious. (Speaking of unique, if I never see another “Joker” or “Harley Quinn” costume, it might be too soon. They were sorely, sorely overused!) Another win was BTOB‘s Changs-sub‘s Tin Man airport fashion, I think because he lost a challenge. And for some of the cooler ladies Halloween costumes, Sulli‘s Alice in Wonderland was creepy, and seems to fit her well, as well as Sooyoung‘s Maleficent, which, good work on that one! 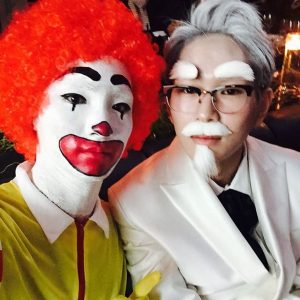 Jennifer: I think that my favorite costume was when BTS did the dance video for 21st Century Girl and Jimin dressed up as Chinese cabbage.
Qing: A number of male idols like Super Junior have cross-dressed as Elsa from Frozen, but I’ll remember Hongbin‘s recent dress-up during Vixx’s fanmeeting because it gave rise to a funny interaction between B1A4‘s Gongchan and Banas.
Gongchan, who is known to be close to Hongbin, replied randomly to Hongbin’s food tweet with a picture of Hingbin in costume, complimenting his cover of Red Velvet‘s “Red Flavor“. But before Hongbin could respond, Banas helpfully appeared with photos of Gongchan cross-dressing, politely dropping remarks like “Hongbin-nim, it looks like you’re going to need this”, forcing Gongchan to backpedal with a meek “Banas, why are you being like this? Please don’t be like this…” (and finally, a bonus: Hongbin’s hair flip).
It has become a cute tradition for BTS to release Halloween-themed dance videos nearly every year, and like Jennifer mentioned, Jimin’s Chinese cabbage costume is a classic. I wouldn’t be surprised if he chose it because it totally obscures his face during the arm-raising part of the choreography, to hilarious effect. You can tell some of their costumes and gags were planned for comic effect, and it’s cute to imagine them and the staff working together just to put a smile on ARMYs’ faces. And who can forget Jungkook dressing up as himself and giving rise to this wonderful meme? 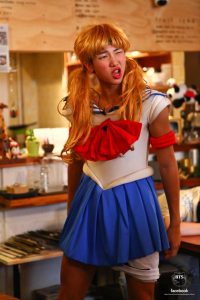 Leesha: I think BTS kind of has the crown when it comes to combining costumes and dance. My favorite has to be the War of Hormone practice with V‘s Joker and Suga‘s Chucky. They get so into their characters — especially Jin! His drunken stumbling turned him into the perfect rendition of Captain Jack and I watch this video every Halloween without shame
Other cosplay favorites for me have to include B.A.P of course. In a bad mood? Here are six goofy Santas with beard malfunctions throwing Psy and Rain dance moves into an already silly dance. Rise of the Guardians is one of my all time favorite movies so Suga as Jack Frost gave me life! I can always count on SHINee for some good costumes but 2015 was simply superb. I mean, the amount of detail is always impeccable when they do their costumes. Jonghyun looks good always, Taemin as Howl, Captain Minho Sparrow (with real alcohol — sorry Jin), and the legendary Colonel Onew Saunders vs Key McDonald? I’m so ready for the pics from this year’s SM Halloween party.
And I almost forgot this Epik High performance from 2012 (the costume part starts ~2:10). Mithra Jin is a little bit hard to understand due to the Bane mask, but he has the mannerisms down perfectly. So many go for the obvious Joker (sorry Tablo) but it was refreshing seeing Bane and DJ Tukutz as Two-Face from Batman’s gallery of villains 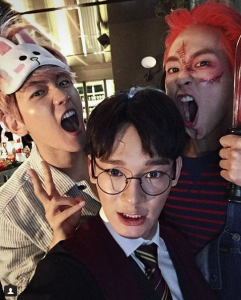 Chloe: I definitely love all the costumes from BTS’s Halloween dance practice of 21st Century Girl! To name a few others though, I will start by saying I generally prefer cuter costumes. From past SM Town Halloween parties, I liked Baekhyun‘s costume as the Line character Coni and Chen as Harry Potter. Another that I like was Taeyeon as a cat with Tiffany as Little Red Riding Hood. Most of these pictures can be found on the Seoulbeats Instagram.
Gaya: I’m a big fan of the fast food wars Onew and Key engaged in that year (they were so extra), as I am of Jonghyun’s dedication to being the weebiest with his costumes — you don’t know what he’ll dress up as, but you know it will be an anime character. Sooyoung’s Sad (from Inside Out) was adorable; Jackson‘s platinum ‘do at the time worked so well with his Thor outfit; and Key and Jo Kwon are idols to watch each Halloween thanks to their dedication to getting the costume just right.
Halloween costumes that are out of left field are the ones I tend to love the most, which is why Chen’s turn as a Yakult lady is so unforgettable. That photo with Yuri openly judging him and his life choices is just the cherry on top. Also memorable was Bulldok‘s first Halloween procession to Music Bank. They didn’t have special outfits like everyone else, but they didn’t need to with their mini cars — the fact that they were cosplaying the Fast and Furious movies did not even matter, to be honest.
And while Orange Caramel are cosplay queen, my mind still goes to the “Red Baloon” performance that saw TVXQ not only dressed up as Mario characters, but also LARP it out by playing a level.
(YouTube [1][2], Images via Twitter [1][2], Instagram [1], JYP Entertainment, Big Hit Entertainment)